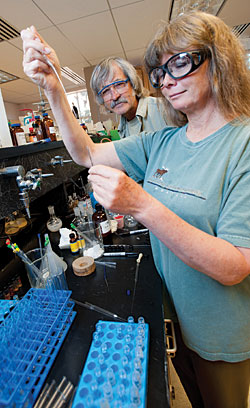 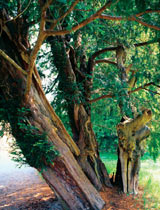 The Pacific yew tree is an important source of both the Taxol compound and endophytes like Taxomyces andreanae that also produce Taxol.

Taxomyces andreanae is a endophytic fungi of the class hyphomycete, found living within a species of yew trees of Northern Montana [1], Taxus brevifolia [2]. Although it had long been known that yew trees produce an important toxic compound, Taxol, Taxomyces andreanae was the first isolated fungus to produce this compound, and at a higher concentration than its host [3] [4]. Taxol, an antimitotic drug, was given FDA approval to treat ovarian cancer in 1992 and breast cancer in 1994 [5], however, its use was deemed impractical due to its low yield from yew trees. Even when administered in a 5% saline solution, the bark of three yew trees was required to treat a single patient [4]. Therefore, the discovery of Taxomyces andreanae in the early 1990s by Andrea and Donald Stierle, and their 1994 patent for Taxol prodcution from the microbe [1], represented a significant step in biotechnology and chemotherapy. Large quantities of taxol have been extracted from Taxomyces andreanae when grown in a semi-synthetic liquid medium and subjected to a fermentation process [2]. Other fungal species within and outside of the Taxomyces genera have been found to produce taxol, however, often with a much lower yield and poor stability when compared to Taxomyces andreanae [3]. Thirty-six total genera contain Taxol producers [6]. 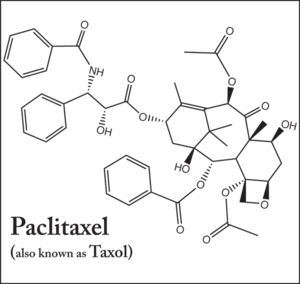 The chemical structure of Paclitaxel, known by the brand name Taxol, an important chemotheraphy compound used to treat breast and ovarian cancers.

Although a plethora of publications and patents for taxol production from Taxomyces andreanae and other related species exists, there does not appear to be any industrial or commercial production of the drug using these methods at the time [7]. Current challenges include inability to obtain significant taxol production after many generations in culture, and instability of the Taxol compound in culture, therefore resulting in breakdown or degredation before a high concentration is available for isolation [6]. Despite these challenges, Taxol production from fungal sources, including Taxomyces andreanae, represents a promising avenue of research and drug development. Many researchers have developed fermentation processes, much like those used to obtain penicillin, to extract Taxol from microbes [11]. These processes have yet to be applied in industry.

T. andreanae is a endophytic fungus found living in association with the inner bark of the Pacific yew tree, T. brevifolia, which is found growing almost exclusively in Glacier National Park of Northern Montana [8]. Like many other ascomycota, this fungus has septate, multinucleated hyphae of various sizes, ranging from 1.2 to 3.75 µm in diameter. Taxomyces andreanae typically forms loose clumps of cells of various sizes. The fungus can be easily isolated and grown in a lab on many common medias, covering a plate with its mycelium in roughly 3-4 days [9]. 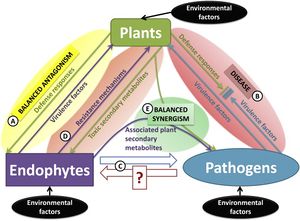 Diagram depicting balanced synergism and interactions between host plants and their endophytes. The outcome of these interactions depends on environmental factors, endophyte virulence and plant defenses.

Taxomyces andreanae is an endophyte living in mutual symbiosis within its host plant, the Pacific yew tree,Taxus brevifolia [1] [2]. As an endophyte, the microorganism exists entirely contained within the host without either member being harmed in the interaction. Despite being a parasite, Taxomyces andreanae is not pathogenic to the Pacific yew tree. Endophytes are unique in their ability to synthesize bioactive secondary metabolites, often which benefit their host in some way [10]. It is likely that the compounds produced by T. andreanae, such as Taxol, benefit the yew tree by being toxic to predators or fulfilling some other vital need for the plant.

The "balanced antagonism" hypothesis states that the interaction between host plant and endophyte is a delicate balance between virulence and defense. It is possible that endophytes are merely latent pathogens, which may become virulent under certain environmental conditions or stresses. Recent studies, however, assert that this interaction is much more than a delicate balance, but instead a complicated and tightly regulated system of communication and association. Various hypotheses have been proposed to explain the coexistence of endophytes and plants. Many recent studies have also discovered complex mechanisms of plant-endophyte cross-talk, as well as communication between different endophyte species within the same plant [10]. Considering these findings, it is likely that plants are complex communities of endophytes that are mutually influencing the metabolic pathways and survival of all interacting organisms, including the host.

Endophytes like Taxomyces andreanae are of high interest to researchers for the the toxic compounds they create, including chemicals that have applications as antibiotics and chemotherapy drugs [11].

Page authored by Kelsey Navis, student of Mandy Brosnahan, Instructor at the University of Minnesota-Twin Cities, MICB 3301/3303: Biology of Microorganisms.