Telomerase is a ribonucleoprotein complex, which is made of a reverse transcriptase enzyme subunit and a long non-coding RNA which contains the template sequence for telomere synthesis. Telomeres are specialized DNA-protein complexes found at the end of all linear chromosomes. These telomeres in human somatic cells are slowly cut off and shortened after each replication cycle due to what some experts believe is oxidative stress of the telomeres. Telomerase is the enzyme responsible for lengthening/maintaining the telomeres that are shortening after each replication. Telomeres are there to protect chromosome ends from being recognized as damaged DNA by DNA damage responses (DDRs). There are certain lengths to where the telomere is too short, and it is known as the "critical length". At this critical length, most cells become "replicative" senescence cells. Once a cell reaches senescence, the cell intelligently stops dividing before the DNA is exposed and there is a high risk of developing cancers and mutations within. The number of times the cell can divide before becoming a senescent cell is called the "Hayflick" limit, named after the American anatomist Leonard Hayflick, and it is around 60 divisions. 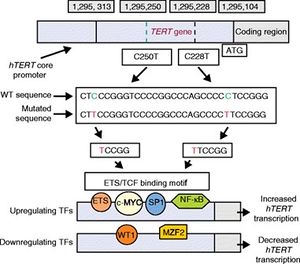 hTERT promoter diagram with up regulators and down regulators shown.[1].

The hTERT gene, human telomerase reverse transcriptase, is a 40kb gene consisting of 15 intron and 16 exons. It is significantly expressed in approximately 90% of all human cancers. This gene encodes telomerase production for the cell. In a normal functioning cell, this hTERT gene is silenced. With the upregulating of the hTERT gene, the telomerase enzyme is produced constantly in cancer cells, meaning constant replacement of the telomeres, so as the cell can replicate uncontrollably without a stopping point. This is how most cancers get this ability. The hTERT promoter region is GC rich and lacks both a TATA and CAAT sequence which is popular in both eukaryotic and prokaryotic cells. There is a specific sequence in the hTERT promoter called an E-box (5'-CACGTC-3') and GC boxes (GGGCGG), that are important for both activation and repression of the hTERT gene. The list of up regulating substrates includes c-MYC, SP1, E-26 Family Members, NF-kB, AP-2, and HIF-1. The down regulators include: p52, MAD, WT1, MZF-2, SIP1, and Menin. With upregulation of the hTERT gene, it results in the cell never reaching the "Hayflick" limit and never becoming a "replicative" senescence cell. Amplification, genomic rearrangements, and promoter mutations are all ways of regulation in the hTERT gene that can be found in cancers. Epigenetics of the hTERT promoter is another way of the gene to change in ways to create an upregulated telomerase enzyme throughout the cell. This includes hTERT promoter methylation as well as miRNAs which both have a big part in the expression of genes. The following are cancers and the frequency of an hTERT promoter mutation being present: 70% of melanomas, 80-90% of glioblastomas, 60% of hepatocellular carcinomas, 60% bladder cancers, 70% basal cell carcinomas, 50% of cutaneous squamous cell carcinomas, up to 30% of thyroid cancers , 72% of oligodendrogliomas. Scientists believe that if they could stop this upregulation from happening and pair it with immunotherapy this hTERT region could be an instrumental part of trying to cure some cancers. 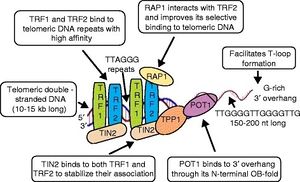 The telomere end interacts with shelterin components and create 'The Shelterin Complex' consists of 3 core subunits: TRF1, TRF2, and POT1. TRF1 and TRF2 are sensors for a certain sequence found in the telomere region. Once this is found, the proteins connect to the telomeric DNA and to stabilize their bonds. The POT1 binds to the 3’ overhang and is used to protect this region while the end of the DNA creates a T-loop formation. In addition, there are TIN2, TPP1, and RAP1 proteins that are there in order to assist the core subunits in their roles. This complex is important for the cell’s recruitment of telomerase, as well as to cover the DNA overhang that could result in a DNA damage response. This complex is important in the protection of the telomere ends. Mutations in this complex lead to a loss of functioning of one of the core proteins. This eventually leads to a break in the flow of covering and detection of the telomere overhang and is a way for a cancerous cell to be created.

In cancer cells, surprisingly telomere length is not extended past the normal length. It is believed that the telomerase just maintains the lengths of the telomeres. There is a study about lung cancer which shows the EGF-mediated activation of telomerase is associated with ETS-2 binding to the hTERT promoter. The hTERT promoter usually undergoes C>T mutations at -124 bp and -146 bp from the ATG start site, which is believed to be the most common cancer-causing mutation. There are many different controls of hTERT expression from promoter mutations to alternative splicing of hTERT pre-mRNA. Even though the telomerase is highly expressed within the cancer cells, research has been done that describes how the telomeres in the cancer cells are in fact shorter than the healthy differentiated somatic cells. It is believed by scientists that the telomerase is used on every one of the telomeres which maintain a certain length that’s a little above the critical length. The constant expression of telomerase does not correlate with the length of the telomeres on cancerous DNA. As discussed earlier in the shelterin section, a mutation in the genes that code for the complexes can lead to an effect on the telomere’s ability to be accessed or be processed. This affect on the telomere is found in a specific type of cancer. In cases of chronic lymphocytic leukemia (CLL), there is evidence that this is the case. Researchers found that there is a mutation causing a loss of function in the POT1 protein.

Targeting Telomeres and Telomerase in Cancer 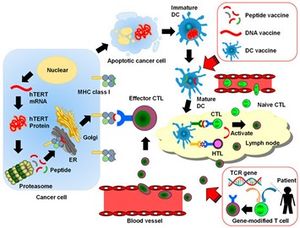 In this diagram the hTERT gene is being processed into the immune system.[3].

One of the newest and most studied cancer therapies at the time is telomerase-targeted cancer immunotherapy. In this method, scientists are using the expression of hTERT as a target antigen within the immunotherapy. There are identified target tumor-associated antigens (TAAs), and it is found that hTERT is one of them. Since it is overexpressed in around 90% of tumors, this is a logical conclusion. The goal of the research is to be able to recognize the overexpression of the hTERT gene, inferring a cancer cell, then be able to create an antigen that the body can recognize and destroy. The different techniques researchers are using are peptide vaccines that target hTERT, immunotherapy using hTERT-targeting dendritic cells, DNA vaccines using recombinant DNA techniques, gene-modified T-cell therapy, and loads more that are being researched as you read this. The most trialed are the peptide vaccines and dendritic cells that target hTERT, being 4 different peptide vaccines and up to 3 DC methods so far. The peptide vaccines are specified to certain tumors. With the knowledge of the amino acids at the active site of hTERT, scientists are then able to create a vaccine that can act on the cell directly by breaking down proteins within the cytoplasm of a cell. Dendritic cells are retracted from patients, then a plasmid with an mRNA encoding hTERT. This creates a lysosome with the hTERT peptide that elicits polyclonal immune responses. There is no doubt that immunotherapy with the expression of hTERT is going to be the frontier of cancer-based research in future.

The diversity of regulating the hTERT gene has led to scientists looking into microbes to try and find inhibitors for telomerase. This would be detrimental to the research because being found in a microbe means there is a huge collection of cells that hold the genes needs in order to produce this telomerase inhibitor. Then scientists could create plasmids with the genes extracted from the microbes and apply them to the cancerous cells to undo the overexpression of the telomerase.

Telomere length and telomerase presence can be signals for developments of cancerous cells within a cell. With mutations or alternative splicing of the hTERT gene, promoter, or pre-mRNA of hTERT, cells can constantly produce the enzyme telomerase which then allows the cell to replicate with no limit. There are certain substrates that can up regulate and down regulate the expression of the hTERT gene, which controls the creation of telomerase. Mutations found within the genes coding for the shelterin complex used to cover and protect the overhanging telomere are another way that cancers can develop within telomere related functions. With discovering these ways that the cancers can develop within the cell, scientists are now attacking the issue of trying to build an immune response to the overexpression of the telomerase enzyme. Within the developing years, there should detrimental research done within this area of study that can lead to the curing of almost all types of cancers.