Giardia lamblia is a flagellated protozoan parasite that settles in the small intestine, causing giardiasis. Antonie van Leeuwenhoek, who examined samples of his own diarrheal stool, first documented the trophozoite form of G. lamblia in 1681. Giardia is confined to the lumen of the small intestine, and does not spread through the bloodstream. The main route to infection is ingestion of untreated sewage and contaminated natural waters. It is not only found in humans, but is the most common parasite to infect other animals as well including cats, dogs, birds, cattle, and sheep . 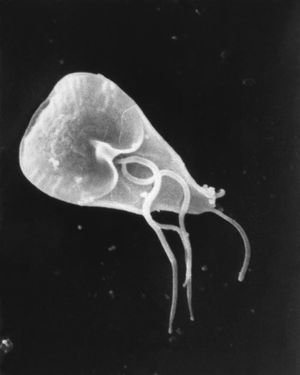 G. lamblia is a flagellated unicellular eukaryotic microorganism (Figure 1.) that has two major life cycle stages. The cyst that is ingested is inert, which allows it to survive in many different kinds of environmental conditions. However after contact with the acidic environment in the stomach, the cyst will excyst into trophozoites inside of the small intestine. The trophozoites are able to form cysts in the jejunum after being exposed to the biliary fluid, which allows transmission of the cyst.

Researchers have discovered fascinating information about giardia. They have found that giardia can induce apoptosis and disrupt the barrier function in small intestine. G. lamblia also undergoes process that allows the parasite to develop chronic and recurrent infections called antigenic variation, which evades the immune system of the host. G. lamblia also has a very interesting metabolic process. It has little biosynthetic capacity. It lacks mitochondria and its oxidative phosphorylation is not mediated by the cytochrome. As well, it is able to carry out aerobic and anaerobic metabolism depending on the amount of oxygen in the environment. Acquisition and metabolism of G. lamblia contribute to the pathological mechanisms of the disease, and how it is able to cause such unpleasant symptoms without actually penetrating the epithelium. 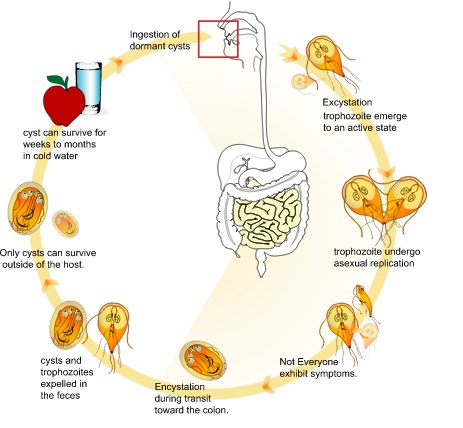 The G. lamblia lifecycle includes a cyst stage and a trophozoite stage. The cycle begins when a noninfective cyst is extreceted from an individual infected. The cyst has a protective barrier and is able to withstand a range of temperatures, desiccation, as well as chlorination, and ozonolysis. The cyst has 4 nuclei and a retracted cytoplasm, which makes it quite distinguishable. Once ingested, the trophozoite begins the feeding stage followed by asexual replication. The remaining trophozoites and cysts are then able to pass through the digestive system .

G. lamblia is acquired through the cyst form predominantly through the fecal-oral route and contaminated water. The cyst is able to protect itself from the host’s gastric acid from its hardy cyst wall. The cyst’s flagella and disk, which are crucial for motility, allow it to attach to host intestinal epithelial cells (Figure 2).

Intestinal macrophages have roles that are specialized in the defense and regulation of infection. We are able to look at these roles functionally through the expression of arginase 1 (ARG1), which is associated with the regulation of inflammation and nitric oxide synthase 2 (NOS2), which is associated with host defense. After infecting mice with Giardia extract, Maloney et. al (2015) used flow cytometry and found increased numbers of macrophages positive for both ARG1 and NOS2 in the lamina propria. However, they did not find any evidence of increased expression of ARG1 in these cells .

Since the life cycle of G. lamblia consists of two stages, there are two opportunities for the parasite to thrive under certain conditions. The cyst form has a reduced metabolic rate compared to the trophozoite form.

G. lamblia is interesting in its energy harvesting pathway. It lacks mitochondria and its oxidative phosphorylation is not mediated by the cytochrome, so the trophozoites rely on glycolysis and arginine dihydrolase pathways that rely on substrate-level phosphorylation for energy production . Trophozoites rely mostly on fermentation (with or without oxygen), and are able to perform aerobic and anaerobic metabolism depending on outside oxygen concentration , which makes them able to live through many different kinds of conditions.

Aerobic and Anaerobic Metabolism How the trophozoite of G. lamblia carries out its metabolism is dependent on the amount of oxygen and glucose present in its environment. Without oxygen, glucose metabolism is used with alanine as the product. At higher oxygen concentrations (>46μM), acetate and carbon dioxide production is dominant while alanine production disappears. During axenic growth, trophozoites survive best under lower carbon dioxide conditions .

Amino Acid Metabolism Amino acids are important components of the energy metabolism of G. lamblia. G. lamblia is capable only of de novo synthesis for alanine and valine. It relies on scavenging other amino acids from the intestines of the host . Aspartate and arginine are two major sources of energy. Aspartate is converted to oxaloacetate by aspartate transaminase, which enters the intermediary pathway and is converted to pyruvate. Arginine is converted into ammonia and carbon dioxide, and generates ATP by substrate-level phosphorylation.Ornithine, the product, is exported in exchange for extracellular arginine. Arginine is most important during the initial stages of giardial growth .

Carbohydrate Metabolism Glucose is used for the growth of trophozoites. The glucose metabolism path is similar to that of eukaryotes, except conversion from Fructose-6-Phosphate to Fructose-1,6-bisphosphate is not regulated, like it is in prokaryotes and eukaryotes. As well, the phosphofructokinase is not ATP-dependent and phosphate-dependent instead .

Understanding the different metabolic properties of the parasite emphasize how it is able to survive in the gut and how it responds to changes in the environment.

G. lamblia is able to cause disease without penetrating the epithelium, invading tissues, or entering the bloodstream .

Some patients have with chronic giardiasis have been found to have epithelial barrier dysfunction, which down regulates the tight junction protein claudin 1 and increases epithelial apoptosis. This causes failure of sodium-dependent glucose absorption, which results in active chloride ion secretion. Water then enters the lumen and causes diarrhea.

In order to see the effect of the infection on epithelial transport and barrier dysfunction, duodenal biopsy specimens from 13 patients with chronic giardiasis and from controls were obtained endoscopically. The resistances of the epithelium and the sub epithelium were found using impedance spectroscopy. As well, researchers performed mucosal morphometry to characterize the tight junction proteins. Overall they found that the patients suffering from giardiasis had a 75% decreased mucosal surface area per unit of serosa area.

Induced Apoptosis Giardia lamblia rearranges cytoskeletal proteins that reduces the electrical resistance across the epithelium. To see whether G. lamblia induced enterocyte apoptosis in duodenal human epithelilal monolayers, monolayers of duodenal epithelial cells were incubated with G. lamblia trophozoites for a certain amount of time and were treated with or without 120 μM caspase-3 inhibitor (Z-DEVD-FMK). It was found that trophozoite strains NF (obtained from an epidemic outbreak of human giardiasis in Newfoundland, Canada) and S2 (originally isolated from sheep) induced enterocyte apoptosis within the human epithelial monolayers, but were inhibited by the Z-DEVD-FMK. It was also found that NF disrupted tight junction ZO-1. Overall, strain-dependent infection of enterocyte apoptosis could contribute to the pathogenesis of G. lamblia. Disrupting tight junction ZO-1 and increasing permeability in a caspase-3 dependent manner could explain the apoptosis effect .

Disruption of the barrier function in the small intestine is T cell independent and increases the permeability of single-layered duodenal epithelium by the phosphoralization of F-actin and of tight junctions in enterocytes. 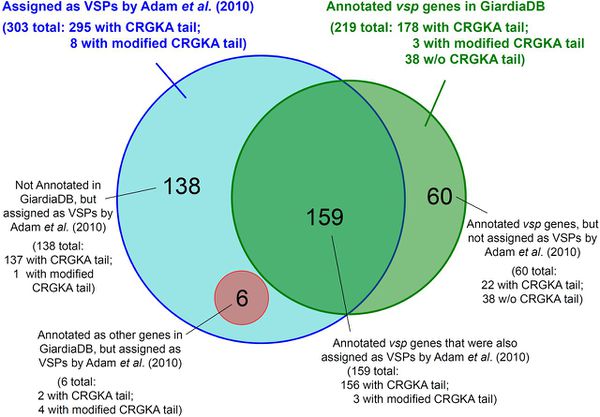 (Figure 3.) Originally assigned by Adam et. al (2001) By Li et al at the Department of Pharmaceutical Chemistry at UCSF.

In order to evade the host’s immune response, G. lamblia undergoes process that allows the parasite to develop chronic and recurrent infections called antigenic variation. From around 190 variant-specific surface protein (VSP)-coding genes, G. lamblia expresses one VSP of each parasite and is able to switch to a different VSP by mechanisms, which are still unknown . The selective pressure of the parasite is dependent on the VSP, and host-specific factors may be involved as well.The diverse patterns of selection show that the interactions between the host and the VSP apply positive and negative selective pressures on the parasites. These pressures are separate from the adaptive immune response. Since selection is dependent on the host and the VSP, many VSP genes in G. lamblia could permit the parasite to infect many different hosts, as opposed to just one. The antigenic variation might also allow the parasite to increase its host range.

Experimentally, only 6 VSPs have been verified to localize the cell membrane so far. By assuming the VSPs contain a certain CXXC motif and a CRGKA tail at the C-terminus. There could be up to 363 VSP genes in G. lamblia (Figure 3).

With new technology, researchers have discovered innovative ways of detecting G. lamblia cysts in water. Koydemir et al. (2015) created a cost-effective and field portable mobile-phone based fluorescence microscopy device designed to detect cysts in large volume water samples. The device even included a machine learning based cyst counting interface, and the entire measurement took less than an hour to test a sample with a volume of 10 ml .

Researchers have also been interested in ultraviolet light (UV) radiation in regards to Giardia intestinalis, since UV light is a natural stressor to the parasite. Einarsson et al. (2015) looked into this idea further and found that cysts had limited ability to repair UV-induced damage and in the future UV disinfection could be studied further to guarantee safe drinking water .

Other studies have been interested on the effects that the parasite has on growth, since the infection is highly prevalent and is a cause of underweight young children. Heimer et. al (2015) examined stool samples from 622 schoolchildren in an urban and a rural school in southern Rwanda and found that the infection more than doubled the odds of stunting growth of children in both types of schools. However, the schoolchildren in rural Rwanda the infection declined with age .

Edited by (Shana Levenson), a student of Suzanne Kern in BIOL168L (Microbiology) in The Keck Science Department of the Claremont Colleges Spring 2015.