The Relationship between Microorganisms and Coral Reefs

Table 1. Counts of bacteria present in the coral mucus layer (6)

Coral reefs are diverse marine environments composed of important hermatypic corals, which obtain nutrition from photosynthetic products of algae such as zooxanthellae, located in their gastrodermal cell layer [6]. Nitrogen, phosphorous, and other such nutrients that are not provided from the zooxanthellae are obtained through two methods, depending on coral morphology [6]. Corals with branched forms are capable of filter feeding, while corals which have flat morphologies use a mucus layer in order to bind particles [6].

Bacteria are plentiful within the marine environment, especially within coral reefs [3]. The mucus layer which covers coral is colonized with a number of bacteria, yielding bacterial communities which may be unique to particular coral species [3]. Unfortunately, these bacteria may be pathogenic to corals and cause a number of diseases [10]. Thus, corals have been observed to engage in antimicrobial activities [3].

Coral reefs are significant to humans for various reasons, including but not limited to, providing food and shelter for marine organisms, use in medical treatments for human diseases, and protecting shorelines from erosion which especially protects agriculture [2]. Events have occurred where entire islands have been engulfed by the sea when the coral reefs that surrounded those islands were destroyed [11].

Bacteria as a carbon and nitrogen source 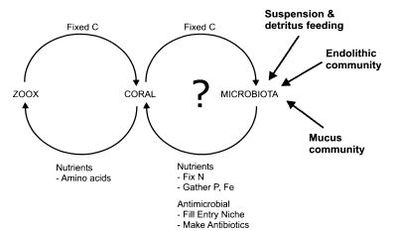 Figure 1. The Carbon and Nitrogen cycle within the coral reef environment (6)

Heterotrophic bacteria are important for carbon and nitrogen cycling within the coral reefs [6]. Experiments have shown that filter feeders such as corals are capable of digesting bacterioplankton as a carbon source [6]. Bacteria and detritus in reef sediment have also been shown to provide organic matter for the coral Fungia horrida through fluorescent labeling experiments [6].

Coral reefs exist in oligotrophic waters which limit primary productivity, yet the reefs contain high concentrations of nutrients and exhibit high primary productivity; this concept is known as the Darwin paradox [9]. In addition, the levels of dissolved nitrogen in water flowing from the reef demonstrate a net export of nitrogen, possibly due to the presence of nitrogen-fixing Cyanobacteria which use a variety of substrates for nitrogen fixation such as sand, limestone and dead coral [9]. Nitrogen fixation was measured through acetylene reduction in coral skeletons and in bacteria isolated from the coral skeleton of Favia favus as shown in Figure 2 [9]. These bacteria were found to contain the nifH gene known for nitrogen fixation which lends itself to the concept that bacterial coral populations may play a role in both providing nutrition and nitrogen in a nitrogen-limited environment [6].

Figure 2. An original figure depicting the acetylene reduction assay which is used to measure the nitrogenase enzyme activity based on (12).

Coral diseases occur due to biotic stresses and have increased in frequency over the last ten years, possibly due to decreasing water quality associated with pollutants and increasing water temperatures [8]. Such abiotic factors allow for the proliferation of pathogenic microbes in the coral reefs [8]. Humans play a large role in creation of factors that affect coral health such as global warming which increases the temperature of water and thus causes the microorganisms to express temperature-dependent genes which may be virulent [11]. Additionally, coastal urbanization directly resulted in the disposal of toxic materials such as sewage, fertilizers, herbicides, and heavy metals [11].

Black band disease (BBD) is literally a black band which degrades live coral tissue as it passes over the colony as shown in Figure 3 [8]. This disease is caused by cyanobacteria in conjunction with sulfur-oxidizing and sulfur-reducing bacteria, though other bacteria and opportunistic organisms may be present [8]. Corals with black band disease are typically in shallow waters where light is available as the cyanobacteria associated with black band disease are photosynthetic [7]. In fact, most coral reefs are infected with BBD at minimal levels and this prevalence increases during late summer when the water temperatures also increase as demonstrated by Figure 4 [8]. Daytime light levels stress the cyanobacteria associated with BBD into forming a dense black band, providing an anoxic environment which may be essential for the sulfur reactions that characterize BBD [7]. 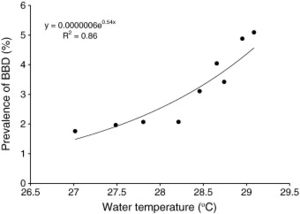 White Band Disease (WBD) is a coral disease characterized by a white band of necrotic tissue which moves along the coral, resulting in a bare skeleton of coral [11]. Type II WBD in particular is also characterized by a loss of zooxanthellae, causing bleaching adjacent to the band of necrotic tissue [11]. In comparison with Type I WBD which only affects Acroporid corals, Type II WBD affects a variety of coral species [11]. The death of corals leads to the accumulation of macroalgae due to the increased availability of substratum for colonization [1]. A probable pathogen for Type II WBD has not yet been isolated or determined but research has been done that shows that WBD is contagious and caused by a bacterial pathogen [5].

Figure 5. Two antibiotics which have been isolated from Sinularia flexibilis (3)

Species of coral such as Gorgonian species have been shown to possess antimicrobial activity when extracts have been tested [3]. Paper discs containing coral extracts from gorgonian coral have displayed a clear zone of inhibition when tested against various marine bacteria as well as several human pathogenic bacteria [3]. Marine bacteria have been demonstrated to be less sensitive to extracts from gorgonian coral than non-marine bacterial species are [4]. Not only could bacteria which colonize the surfaces of mucus-covered coral act as pathogens, they could also cause macrofouling and so mechanisms to control microbial activity would be significant [4]. When coral colonies are stressed by bacteria, their production of mucus is increased – which alone does not kill the coral colonies – bacteria can cause death of coral as demonstrated in experimental trials without antibiotics [4].

Future research could be done with respect to antimicrobial activity in a variety of aspects [3]. One topic that bears further investigation is nontoxic antimicrobial activity, where compounds produced by the coral do not necessarily kill or inhibit the growth of the specific organism; instead they act selectively against phenotypes or characteristics expressed by pathogenic microorganisms [3]. In other words, the corals may defend themselves against microbes by targeting mechanisms necessary for pathogenesis but not survival within the cell culture [3]. Another topic that needs further consideration is the role of symbiotic marine bacteria have been shown to produce secondary metabolites which were formerly believed to have been produced by the host organism [3].