The role of Bifidobacterium on the Immune System 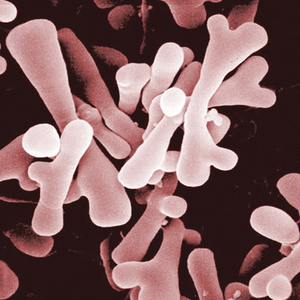 Picture of Bifidobacterium. From Cann, 2009.

Bifidobacterium is a gram-positive lactic acid bacterium and common resident of the human gut microbiome that is speculated to have a huge influence on a range of health-related factors. Due to Bifidobacterium's dominance in infant’s fecal flora and as well as its probiotic application, it has experienced a surge in popularity by the medical and science realm to better understand its mechanistic properties and implications in human health concerns. The mother-to-infant transmission of Bifidobacteria and other bacterial species have been subject to several studies as more knowledge arises on how the initial gut coloinzation can impact an individual’s future health. Because of the speculated health benefits, the applications of Bifidobacterium as a probiotics has become one of the most popularly marketed lactic acid bacteria. 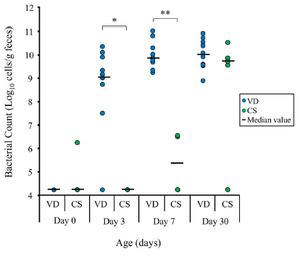 Increasing knowledge of initial gut colonization show a pattern of facultative aerobes such as Enterobacteriaceae initially colonizing the microflora, setting the path towards colonization from anaerobic bacterias such as Bifidobacterium longum (Makino, et.al. 2013). This pattern in colonization is interesting in sorts because of its implications of the microbial stimulation that can impact various changes to the development of the immune system. In addition, the transmission of Bifidobacterium and other bacterial species assumes the gastrointestinal tract of newborns to be sterile until birth.

While infants are exposed a wide variety of microbes during birth, only a portion of these microbes colonize the infant’s gut microbiome. Of the microbes that can potentially colonize, the mother’s gut and vaginal microbes are thought to have the greatest influence. When Makino et.al. conducted a study, they concluded vertical transmission of bacterial species including Bifidobacterium was provable as these species were observed in both the mother and infant’s guts after delivery. Thus, the initial exposure when the infant is exposed to the mother’s microbes in the vaginal epithelium and perianal areas is considered to be the primary source of the prominent colonization of Bifidobacterium in the initial gut microbiome.

While vertical transmission of Bifidobacterium colonization occurs through contact during vaginal delivery, Cesarean delivery obstructs a large portion of transmitting the mother’s microbes on the baby’s composition. Because exposure to the mother’s vagina and gut is absent during a Cesarean delivery, transmission of those bacterias to the infant is no longer possible. This mode of delivery is correlated to the large decrease in observable Bifidobacterium colonization in the initial microbiome composition (Biasucci et al., 2010; Makino et al., 2013; Mikami et.al., 2012). Interestingly enough, while initial gut colonization of Bifidobacterium has been shown to be highly variable between vaginally and cesarean delivered infants, colonization patterns to become more cohesive and similar later on. It takes approximately 1 week before any type of bacteria colonizes a sterile gastrointestinal tract, and the fluctuation occurs until approximately 3 months after birth (Björkstén, 2006).

While the transmission of Bifidobacterium through the mother’s vaginal and gut composition is eliminated in Cesarean deliveries, other factors can influence the initial colonization pattern of the infant’s gut. The second largest mode speculated to directly influence the colonization is the mode of feeding. Infants can either be breast-fed, formula fed, or fed through a mixture of these two. Feeding greatly influences the transmission, as lactic acids including Bifidobacterium and Lactobacilli are speculated to be present in breast-milk and thus influence the colonization of the infant’s gut (Mikami et al., 2012). In addition, transmission does not necessarily have to be vertical as we observe horizontal transmission patterns. Studies often observe the bacteria species observed in the setting of delivery, for Cesarean delivered infants – the hospital, to hold a large influence in colonizing the initial gut (Mikami et al., 2012).

Implications towards immunity and other health diseases 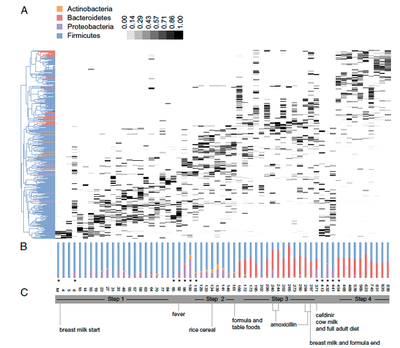 Cesarean delivered infants are exposed a larger variety of environmental bacteria, and are thus colonized with a lesser concentration of bacteria such as Bifidobacteria. This increased exposure and attainment of environmental bacteria can attribute to more health related diseases. The importance of Bifidobacterium is still under speculation; however, growing research proves that a greater initial colonization proportion of Bifidobacteria correlates to significantly less health diseases.

When observing the different modes of delivery, studies have found that naturally born individuals have a defense mechanism to certain diseases early in life such as Methicillin-resistant Staphylococcus aureus (MRSA) (Dominguez-Bello et al., 2010). The idea is that bacteria including Bifidobacteria that is transmitted during vaginal deliveries temporarily occupy most all species-specific niches, providing protection against pathogens more frequently found in hospital settings; a defense mechanism Cesarean delivered infants do not have because of the different bacterial exposure. Importantly, Bifidobacteria’s main characteristic is speculated to the ability to protect the host from potentially harmful entities through inhibiting the growth of pathogens. This is often through antimicrobial means, preventing the adhesion of harmful bacterias and cells on the gut epithelial cells, and stimulating immune responses (Picard et al., 2005).

Many have linked the recent allergy epidemic in the past decades as a response to Cesarean delivery and the lack of exposure to Bifidobacterium and other vaginally introduced bacteria to eventually colonize the infant’s gut. For infants born into a family with a history of allergies, sensitization and later development of allergies was especially stronger if delivered through Cesarean section. Subsequent food allergy was at a 4 to 7-fold increase for CS infants in comparison to vaginally delivered infants (Eggesbø et.al., 2003). In addition, a study using hen’s egg as an IgE allergen marker proved that CS infants were more susceptible to later sensitization (Laubereau, 2004).

Biasucci et.al. recognized that reduced exposure to a variety of microbes in the environment has been linked to the delay of postnatal maturation of the immune system and thus slower rate to obtaining an optimal balance between TH1 and TH2-like immunity (2010). The lack of Bifidobacterium present, and a greater presence of other bacterial strains, impacts the way upon immune system can be built upon. Ménard et.al. proved that Bifidobacterium’s ability to stimulate the immune is species specific whereas its influence of the orientation is strain-specific in regards to the balance of T-helper (TH1)/TH2 lymphocyte (2008). The ability to determine the onset of allergic diseases is the mechanism in which T-helper 1 (TH1)/TH2 lymphocyte responds to antigens with a TH2 phenotype (Ménard, et.al. 2008). In addition, the influence in which Bifidobacterium affects different response pathways in the immune system was observed by a study Dong et.al. conducted based on minimizing and supplementing the presence of Bifidobacteria against a control (2010). Their study proved that the intestinal colonization is able to aid expression of IL-12 in the gut, influence T-cell development in the thymus, and aid the development of Treg response in the gut (Dong et.al., 2010).

Uses as a Probiotic 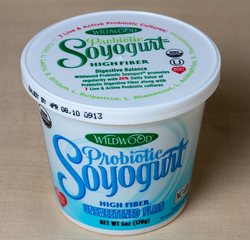 An example of a yogurt product advertising Probiotics. From Veganbaking.net, 2010.

Bifidobacteria has surged to popularity as one of the more popularly marketed lactic acid bacteria probiotic, a category that includes Lactobacillus and Streptococcus. Probiotics are known to be living microorganisms that affect the hosting individual in a positive manner by regulating mucosal and systemic immunity as well as fortifying the microbial balance in the intestinal tract (Madsen, 2001; Picard et al., 2005). As more research comes out praising the beneficial influences of these bacterias on human health, the market has burst into snowballing the term probiotics.

Matching What the Market and What Science Says

The market currently advertises strong supporting scientific evidence towards the uses of probiotics; however, this is often misleading. While we do observe significant benefits of Bifidobacteria in the infant’s gut, more investigation is necessary in terms of how a supplementation of Bifidobacteria can aid in maintaining general health. Interestingly, while Bifidobacteria colonizes up to 90% of an infant’s gut microflora, this proportion eventually shifts to approximately 15% in the average healthy human (Ménard et.al., 2008). A common misconception is that because Bifidobacteria clearly have been associated to positive effects in infants, it must do so too in adults.

The most important aspect of understanding Bifidobacteria as a probiotic is that research is still not conclusive on a lot of the information that has been labeled as a “scientifically proven” item. However, there are several advantages to certain Bifidobacteria strains, and characteristics of the genus itself, that proposes to actually live up to the potential currently marketed. Bifidobacteria is generally understood to have beneficial influences in the gut because of its unique ability to survive during gastrointestinal transit when administered as probiotic.

Consumers understand probiotics for its positive influence on digestive health to a larger degree than its application as immune-beneficial supplements. The United States has been experiencing a surge in the probiotics market for its proposed positive effects in the digestive system. Currently, clinical studies have focused on the mechanisms of action on how probiotics such as Bifidobacteria impact problems such as diarrhea in infants, irritable bowel syndromes, and administering probiotics present in yogurt in high dosages to children (NCCAM, 2007). However, the side effects of these products are often not as well known as long-term studies are still in preliminary researching stages, thus moderation is key towards introducing probiotics especially in younger and more vulnerable populations (NCCAM, 2007).

As mentioned previously, the rise in probiotic items and the information given out regarding its effects needs to be further investigated. In addition, while we’ve made great strides towards understanding the intestine colonization, especially Bifidobacteria’s role, we still do not know a lot regarding several aspects. The intestine itself has a total of up to 1013-1014 bacteria living in the intestinal tract, with only a portion discovered and identified (Picard et al., 2005). The usage of Bifidobacteria itself needs to be further investigated in long-term studies for its probiotic applications. However, this kind of research will be fully realized once we learn more on certain aspects including the discovery of more potential Bifidobacterium species in the gut and its specific effects towards general health, better understanding the mechanism of action as a probiotic, and the relationship to the general ecology in the microbiome (Picard et al., 2005).

National Center for Complementary and Alternative Medicine (2007). Oral Probiotics: An Introduction. Get the Facts. Retrieved from: http://nccam.nih.gov/health/probiotics/introduction.htm

Edited by (Christina Kang), a student of Nora Sullivan in BIOL168L (Microbiology) in The Keck Science Department of the Claremont Colleges Spring 2014.