The use of antibiotics on Wolbachia as treatment for filarial diseases

Neglected tropical diseases are a group of diseases that primarily affect poor populations across the globe. Brugia malayi is a filarial nematode that can cause lymphatic filariasis and Onchocerca volvulus is a different filarial nematode that causes onchocerciasis. Predominantly found in sub-Saharan Africa, these filarial diseases, that are also neglected tropical diseases, are not life threatening, but greatly affect the quality of life for those infected. Wolbachia, an endosymbiont that lives in many insects and arthropods, also lives within these filarial nematodes. Due to the symbiotic relationship that makes these nematodes' and Wolbachia's processes so specialized and heavily dependent on each other for survival, treatment of Wolbachia with antibiotics is a possible target for antifilarial activities.1 Thus, recent research looks for new modes of action for novel antibiotics to treat filarial caused diseases to possibly prevent Wolbachia from reaching antibiotic resistance.17 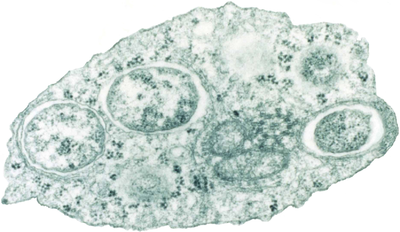 Past research has shown that the removal of Wolbachia from the host filarial nematodes causes antifilarial effects.1 To understand why this event occurs, the evolution of the symbiotic relationship between host and endosymbiont must be understood. This knowledge could lead to more efficient treatments of filarial disease that prevent the proliferation and transmission of Wolbachia through the life cycle of the host.

Wolbachia is found in stages of larval development in the hypodermal cells of the lateral cords as well as in the embryos of female filarial nematodes. 2 Past studies dating back to the late 1990's and early 2000's have shown that Wolbachia is transmitted by female Drosophila melanogaster to offspring by localizing in the posterior female host oocytes, thus increasing its chance to be incorporated into the germline and be passed off to the offspring. More recent studies on Drosophila have determined the mechanism to be related to the bacteria’s ability to use Drosophila microtubules, kinesin and dynein in insects to properly segregate to the maternal hosts' posterior germline pole plasma area during oogenesis. 3 4 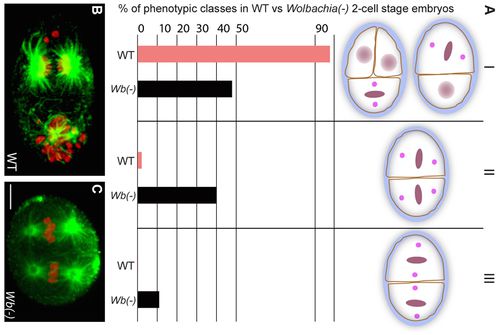 Landman et al. showed that removal of Wolbachia from the filarial nematode host leads to large scale occurrences of apoptosis in the adult germline, and in the somatic cells in certain stages of nematode development leading up to the adult stage.5 The apoptosis in the uterine area results in sterilization of the adult female worms, as the embryos in uterus undergo apoptosis. This considerably reduces the adult worms' ability to spread and cause filarial diseases. Microfilaria are able to remain motile and viable, but are limited in their ability to develop past the L4 larvae stage and thus be able to reach a reproductive age and help the proliferation of more nematodes, when Wolbachia is removed.5 It was also found that Wolbachia uses A-P (Anterior-Posterior) polarity to localize to the posterior of the egg and thus the beginning of the germline. Figure 1B shows that female nematodes with Wolbachia carry out normal embryogenesis, while Figure 1C shows that females nematodes without Wolbachia have defects in A-P polarity and disruptions in oogenesis. Thus, Wolbachia is needed for the proper A-P polarity in the filarial nematodes and, therefore, necessary for normal embryo development. 2 Both of these findings could explain how the removal of Wolbachia leads to sterilization of female filarial nematodes.

Wolbachia can create a proinflammatory response with interaction with specific immunne cells. 1 Wolbachia creates an ineffective neutrophil response by preventing the disperal of eosinophils.1 The Wolbachia stimulate the production of chemotactic cytokines that determine the neutrophil recruitment. When these neutrophils engulf the Wolbachia containing filarial nematodes, it stimulates the production of more chemotactic cytokines and thus a greater neutrophil recruitment pull. The large numbers of neutrophils release toxins, resulting in detrimental effects to nearby cells that regulate corneal functions.6 This event shows how Wolbachia can contribute to onchocerciasis.

Antibiotics have been seen to affect filarial nematodes due to their symbiotic relationship with Wolbachia.1 However, these treatments differ in efficacy, depletion of Wolbachia in the filarial nematode, and the duration and dosage of treatment.

Thus far, long dose treatments of doxycycline seem to be most effective in treating these tropical diseases: treatment of 100 mg/day for six weeks showed full Wolbachia depletion and sterilization of female filarial nematodes for 18 months, while 200 mg/day for 4 – 6 weeks showed detrimental effects towards filarial nematodes.8 However, doxycycline can disrupt bone and teeth development, making it unsafe for children and pregnant women to use.9 Due to its long duration treatments and its inability to be safe for all people to use, doxycycline is unsuitable for mass drug administration.10 Therefore, other combinations of effective treatments are being evaluated as an alternative to doxycycline. 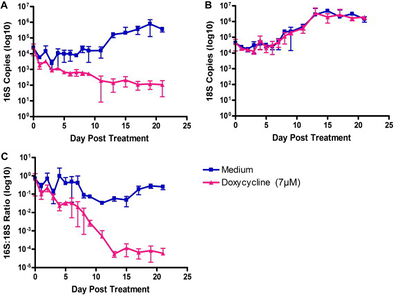 Doxycycline is harmful to pregnant women and children. Rifampicin is used to treat tuberculosis and could result in cross-resistance occurring in Wolbachia. 13 Therefore, other antibiotics must be tested to see if they are effective in removing Wolbachia from the nematodes. Corallopyronin A is a noncompetitive inhibitor of bacterial DNA-dependent RNA polymerase. 13 This target for the Corallopyronin A is specific to prokaryotes and different enough from the mode of action of rifampicin to prevent cross-resistance from occurring. According to Schiefer et al., treatment of 35 mg/kg/day for 28 days showed removed more than 98% of the Wolbachia along with no adverse effects to the mammalian host. These results are equivalent to a treatment of high dose doxycycline for a short period of time and a longer duration treatment of rifampicin. 13 Treatment using Corallopyronin A resulted in shorter larvae and sterility of the female filarial nematodes. These results show the possibility of Corallopyronin A as a potential antibiotic for treatment of filarial caused diseases.13

A recent find in effective antibiotic treatments state that there are many possibilities for potential antibiotics. Johnston et al. looked at repurposing antibiotics. They found that 69 out of 121 compounds that showed in vitro activity towards filarial nematodes were seen as possible effective targets for removing Wolbachia from these nematodes.10 Using this information, 4 out of 15 selected compounds were found to show in vivo activity. As seen in Figure 2, the effectiveness of these compounds was evaluated when by comparing the effects to doxycycline. These treatments came from the fluoroquinolone, tetracycline, and rifamycin classes.10 One of the most surprising results showed that ciprofloxacin from the fluoroquinolone class showed detrimental effects towards filarial activity. This finding is contradictory to earlier studies that found ciprofloxacin to be an ineffective treatment for these tropical diseases.10 Thus it is possible that Wolbachia may have lost its antibiotic resistance towards this specific antibiotic and opens up possibilities to new research and more treatments that may have been overlooked to its inconsistencies in removing the Wolbachia. This particular study has shown that there is much more to learned about this phenomena and much more research to be done to fully understand the depth of the symbiotic relationship between host and endosymbiont and possible treatments to disrupt that relationship. Mechanisms of action for the identified 69 compounds that showed in vitro activity still have yet to be discovered. This area of research is rapidly evolving and expanding, with new questions popping up along the way.

The Heme Biosynthesis Pathway has been identified a possible target for antibiotics on Wolbachia. Although humans also synthesize heme enzymes, there is a significant evolutionary distance between the human and Wolbachia heme synthesis genes.14 Thus, for the most part, protein products of Wolbachia heme biosynthesis genes targeted by potentially new antibiotics, will not affect protein products of human heme biosynthesis genes human and have an adverse effect on the person taking the antibiotics. Wu et al. showed that targeting the Heme Biosynthesis Pathway led to reduced adult filarial motility.14 Thus, nematodes’ ability to spread the filarial effects is hindered. 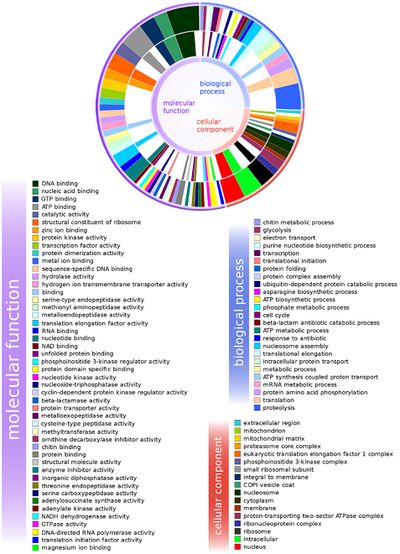 Figure 3. Host gene expression can be altered when the host's endosymbiont is depleted. In this figure, the inner circle corresponds to 7 days and outer circle to 14 days post-treatment data. The white junction ring between the 7 days and 14 days data allows a direct comparison of the proportions between both datasets. White spaces between colored boxes indicate missing GO categories in each of the datasets, or reduced numbers of genes belonging to that category in one of the datasets as compared to the other. doi:10.1371/journal.pntd.0000525.g004 (Ghedin et al. 2009 from PLOS Neglected Tropical Diseases).15

Gene Expression of B. malayi

Ghedin et al. looked at the gene expression of the host, B. malayi, when treated with antibiotics from the tetracycline class were done to see how the host copes after depletion of its endosymbiont. As seen in Figure 3, it was found that once the Wolbachia had been depleted from the host, there was an upregulation of gene expression from host genes that encode for amino acid synthesis and protein translation, and a downregulation of host genes that encode for cuticle biosynthesis.15 Also seen in other organisms, the upregulation of the specific genes suggest a stress response, to a large depletion of nutrients. The Wolbachia may have been supplying the host with many nutrients and once the Wolbachia was removed from the host, the nematode had to make its own nutrients.15 Gene expression from host genes encoding for energy metabolism pathways seemed downregulated as well.15 This could be interpreted as the filarial nematode saving energy for protein synthesis and be the reason for its reduced motility. Other downregulated genes included ones involved in cuticle biosynthesis, which could be another reason for reduced motility.15

FtsZ is expressed from a highly conversed gene sequence. It is also an essential cell division protein that is utilized in almost all bacteria and shows GTPase activity.16 Inhibition of the protein’s production was tested by evaluating GTPase activity. Li et al. observed that FtsZ was found in all stages of development, and specifically observed to be most numerous in during the fourth larval stage and in adult females and least numerous during the third larval stage. Since the third larval stage signifies that the filarial nematode is infectious and the fourth larval stage occurs after infecting the host, these results suggest that there is a large amount of replication occurring right after the filarial nematode infects its host.16 B. malayi was treated with GTPase inhibitors and there was a decrease in motility and proliferation of the nematode. These results show that FtsZ is a potential target for antibiotics treating these tropical diseases, and open up the possibilities for other possible cell division proteins as targets for inhibitors.16

How You Can Get Involved

According to the Bill & Melinda Gates foundation, more than 1 billion people in developing countries suffer from infectious diseases. These diseases bring in very little attention and donations, mainly because these infectious diseases are very uncommon in wealthier countries. For more information about getting involved in the eradication of these neglected tropical diseases, please look into the Carter Center Health Program and the Bill & Melinda Gates foundation.

William Sullivan's Lab is interested how Wolbachia use and manipulate host cell processes to their ensure its survival and proliferation. The group looks at the symbiotic relationship between Wolbachia and host to determine how the bacteria is passed from mother to offspring and mechanisms of Wolbachia replication. They are also looking into novel antibiotic targets for Wolbachia as treatment for filarial diseases.

Mark Taylor's Lab is interested in the symbiotic relationship between filarial nematode and Wolbachia to understand how the endosymbionts contribute to the pathogenesis of the filarial nematode when looking at host immunity and immunopathology. This group carries both research in the field and in the laboratory to find answers to their questions.

The Anti-Wolbachia (A-WOL) consortium, funded by the Bill and Melinda Gates foundation, is a coalition of industrial and research communities that work together to create suitable antibiotics for mass drug administration that target Wolbachia as treatment for filarial diseases of onchocerciasis and lymphatic filariasis. They are constantly look for new mechanisms of action for novel antibiotics and other alternative treatments to prevent formation of against drug-resistant strains of Wolbachia.

Edited by Nitin Kuppanda, a student of Suzanne Kern in BIOL168L (Microbiology) in The Keck Science Department of the Claremont Colleges Spring 2015.