Thiomargarita namibiensis was discovered in oceanic sediments off the Namibian coast in April 1997 and currently holds the world record for largest known bacterium (Schulz 2002). This microbe ranges from 100 to 300 micrometres in length with the largest reported to be 750 micrometres (Girnth et al. 2011). In comparison, E. coli and other normal sized bacterium are an average of 2 micrometres, approximately 0.7% the size of T. namibiensis (Wirsen 2004). To put this into perspective, a single T. namibiensis is approximately the size of a pure isolated bacterial colony on agar plate, which is the product of thousands of divisions of a single bacterial cell. Thus, the gigantism of the species can be truly appreciated. T. namibiensis is abundant in its environment, making up approximately 0.8% of the sediment thus occupying the greatest volume in Namibian sediments (Schulz 2002).

T. namibiensis exists as chains of white cocci enveloped by a sheath layer which is believed to protect the cell from damage from contact with sediment (Mokso et al. 2012). This vicious protective layer prevents this species from being motile. The white pigmentation is due to sulfur inclusions within the cell (Schulz 2002). The inclusions inside the organism are due to large liquid vacuoles which occupy most of its internal space (approximately 80-98%). The vacuoles permit such cell size without the organism experiencing diffusional limitation because the vacuoles reduce the size of effective cytoplasm (Kalanetra et al. 2005). The cytoplasm of T. namibiensis is a thin layer of approximately 1-2 micrometres surrounding the vacuole (Schulz 2002). This amount of cytoplasmic space is similar in surface area compared to standard bacterium. T. namibiensis reproduce through reductive division (Cunningham et al. 2011). 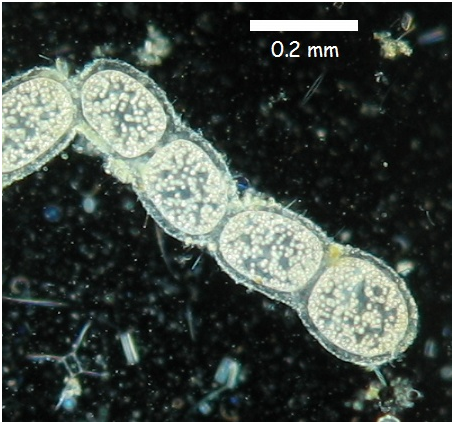 Bacteria are generally small which is favourable for rapid growth and efficient nutrient uptake (Jorgensen 2010). Nutrients are able to diffuse faster and are more effectively taken up in smaller cells. The primary mechanism of nutrient uptake in T. namibiensis is through diffusion without usage of special transport systems (Schulz 2002). Despite the large size of the microbe, nutrients are still capable of efficient diffusion throughout the organism due to the large central vacuoles which limit the volume of the effective cytoplasm. The large size of T. namibiensis is a result of its storage compartments for soluble electron donors and acceptors (Schulz 2002). With this adaptation, this bacterium does not need to be in constant contact with nutrients and are still capable of surviving for long periods of time. The occasional exposure to substrates allows T. namibiensis to uptake essential nutrients for storage in the central vacuoles. This adaptation is necessary for its habitat in oceanic sediments where nutrients are only available through occasional sediment re-suspensions (Schulz 2002). 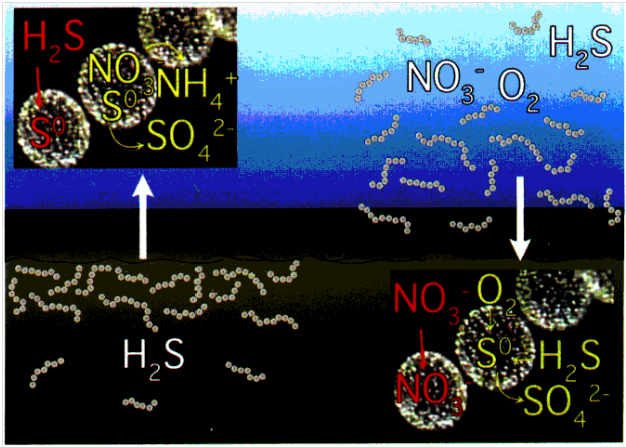 Image demonstrating metabolism of T. namibiensis. On the left side, the organism is shown suspended in sediment with high concentrations of sulfide. Under such conditions, sulfides are stored in sulfur inclusions and can be metabolized for energy. On the right, the sediment resuspensions expose the organism to nitrates which are also stored in cell vacuoles. Image from American Society for Microbiology.

T. namibiensis can tolerate a wide range of environmental conditions. This species is one of few the chemolithoautotrophic bacteria capable of using hydrogen sulfides as its main electron source and nitrate as primary electron acceptor (Wuethrich 1999). More specifically, T. namibiensis oxidizes hydrogen sulfide to elemental sulfur while reducing nitrate to ammonia (Schulz 2002). T. namibiensis resides in anaerobic sediments where sulfide concentrations reach toxic levels of up to 10 mM (Schulz 2002). The organism has the capability of converting the sulfide into a condensed, non-toxic form (Schulz 2002). This source of sulfide can then be stored in its vacuoles and slowly metabolized during starvation conditions. Nitrate, its primary electron acceptor is seldom available in sediment environment. Levels of nitrate in sediments are barely detectable (< 50 µM) (Schulz 2002). Thus, T. namibiensis has also evolved mechanisms to store nitrate along with sulfides in the central vacuole (up to 800mM) (Schulz and Beer 2002). T. namibiensis also has the capability of preferentially using oxygen in place of nitrate when it is available. However, oxygen is also unavailable in the bottom water just above the sediments (Schulz 2002). The only time which the organism has access to nitrate and oxygen is when sediment is resuspended by outgassings of methane (Girnth et al. 2011). In the presence of both oxygen and nitrate, T. namibiensis uses oxygen preferentially and uptake nitrate for storage. The T. namibiensis central vacuole also contains smaller inclusions of polyphosphate (Girnth et al 2011). Polyphosphates (ie: AMP, ADP, ATP) are present in all organisms but only few are able to accumulate them (Schulz and Schulz 2005). Under anoxic conditions, internally stored nitrate is used as an electron acceptor while polyphosphates are metabolized to gain energy (Schulz and Schulz 2005). Under oxic conditions, the bacterium can use sulfide and invest energy in the accumulation of nitrate and polyphosphates (Schulz and Schulz 2005). In this sense, T. namibiensis is capable of surviving long periods in which essential nutrients are unavailable.