Mycobacterium tuberculosis and Human Immunodeficiency Virus are both diseases that plague many developing countries. In fact, individuals living with HIV are 12-20 times more likely to develop tuberculosis [1]. Currently there is an extensive discourse on the relationship between the two diseases, and whether or not there is a correlation between their effects and multi-drug resistant tuberculosis. For example, studies have examined whether HIV has an impact on latent or recently transmitted tuberculosis, and if HIV exacerbates the development of multi-drug resistant tuberculosis. A closer look at this discourse may reveal new information about how to control and treat these diseases, and how to combat drug resistant strains of tuberculosis from developing.

Tuberculosis is caused by the bacteria called Mycobacterium tuberculosis. This bacterium is non-motile and rod-shaped, 2-4 micrometers in length and 0.2-0.5 um in width (Figure 1). Because this bacterium is classified as an obligate aerobe, it is commonly found in the lungs, however, complications in the kidneys, spine, and brain can arise [2]. Additionally,Mycobacterium tuberculosis has a generation time of 15-20 hours, and is an acid-fast bacteria due to its unique cell walls, which contain a high concentration of lipids, including mycolic acids. This high concentration of lipids allows the bacterium to be impermeable to many stains and resistant to antibiotics, acidic and alkaline compounds, osmotic lysis, and lethal oxidations. Multidrug-Resistant tuberculosis, otherwise known as MDR TB, develops when the bacterium is resistant to two or more of the common anti-tuberculosis drugs such as, isoniazied and rifampin [3]. 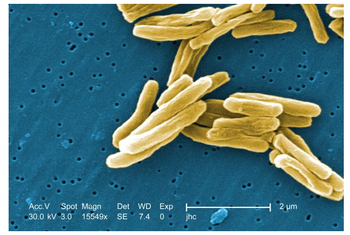 Figure 1 A colorized scanning electron micrograph of Mycobacterium tuberculosis. This was created in 2006. By Dr. Ray Butler, at the CDC.

Tuberculosis is highly contagious and spreads through the airborne transfer of Mycobacterium tuberculosis from an infected individual to others (i.e. through coughing and sneezing).There are two distinctions, latent infection and disease, that are ascribed to tuberculosis. Latent infection means that an individual has been exposed to the bacterium, but the immune system is able to control the bacterial growth by releasing macrophages that prevent the bacteria from spreading, and consequently the disease from developing [4]. These individuals are not contagious and do not experience any tuberculosis related symptoms, but will still test positive for tuberculosis. Tuberculosis disease, or active tuberculosis, occurs when the bacterium continues to multiply beyond the control of the immune system. White blood cells form granulomas, which then grow to form nodules. The bacteria grow in these granulomas, and eventually breach the granulomatous wall, from which the bacteria enter the lungs and divide rapidly [18]. Individuals with the disease experience coughing up blood and sputum, coughing for three or more weeks, night sweats, pleurisy, weight loss, fatigue, fever, pain in the chest, and loss of appetite (Figure 2). Left untreated, tuberculosis can be fatal. 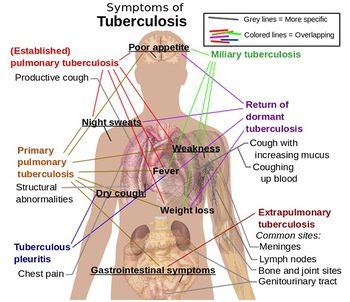 Figure 2 A depiction of the various symptoms and stages of Mycobacterium tuberculosis. This was created on June 1, 2009. By Dr. Mikael Häggström.

In order to diagnose tuberculosis, a mantoux skin test is conducted, however additional diagnostic tools such as, chest x-rays and sputum cultures, are needed to determine if the infection is latent or not. Over 10,000 bacteria per ml of sputum are required in order to determine the presence of Mycobacterium tuberculosis in a sputum sample under 1000X magnification [5]. Since the generation time of tuberculosis is lengthy, treatment includes a combination of antibiotics prescribed for 6-12 months. Individuals infected with tuberculosis disease receive a combination of antibiotics, including isoniazid, rifampin, ethambutol, and pyrazinamide. This combination decreases the chance of antibiotic resistance from developing. The treatment for individuals that are co-infected with HIV and tuberculosis is relatively the same, except the pharmacokinetic drug interactions between antibiotics and antiretroviral therapy need to be considered [16]. Certain antibiotics, such as rifampin, are not used to treat individuals who also have HIV, especially those who are taking protease inhibitors (saquinavir) and non-nucleoside reverse transcriptase inhibitors (delavirdine) [16]. This is due to a high risk of drug interactions between rifamycins and protease inhibitors. However, if a rifamycin is used in conjunction with antiretroviral therapy, rifabutin is preferred over rifampin because the risk of drug interactions is lower [16]. Individuals who have latent tuberculosis and HIV are treated with isoniazid. This particular treatment prevents the tuberculosis from developing into a disease, however it can have adverse side effects on the liver. 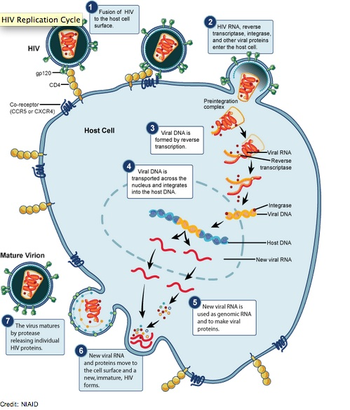 Figure 3. The steps of the HIV replication cycle. Please click image for enlarged text. From the National Institute of Allergy and Infectious Diseases.

HIV is spread through bodily fluids such as, blood, semen, vaginal secretions, and breast milk [19]. Contraction of the disease is likely to occur during unprotected sex, breastfeeding, vaginal births, and by sharing needles with an infected individual [19]. HIV is diagnosed by testing blood and saliva for antibodies to the virus. This diagnosis can result in a false negative because it can take up to six months for these antibodies to develop. Fortunately, there is a new test that can detect HIV antigens within days of infection [17]

This attack on the immune system highly increases the risk of individuals developing other infections. In fact, HIV is the biggest predisposing factor for tuberculosis, with 10 percent of HIV positive individuals infected. HIV significantly increases the risk of latent tuberculosis developing into active disease. According to the CDC, tuberculosis the leading causes of death among HIV infected individuals. The Natural Standard states that HIV infected individuals who also have TB commonly experience extrapulmonary symptoms in the bones, joints, nervous system, and urinary tract when the infection spreads to other organs (Figure 2). If treatment is started early, HIV infected individuals have a good chance of recovering from TB. HIV treatment usually includes a combination of highly active antiretroviral therapy, fusion inhibitors, nucleoside reverse transcriptase inhibitors, and protease inhibitors. Although treatment can suppress the virus, HIV is not yet curable.

The Natural Standard supports that tuberculosis causes HIV to replicate faster and exacerbates HIV infection whereas other studies contend that there is no significant relationship between HIV infection and tuberculosis. A sample of these studies will now be presented. Most of these studies rely on the examination of clustering, which is defined as “DNA fingerprinting analysis of insertion element IS6110 of the genome Mycobacterium tuberculosis [6]. Individuals who are part of a cluster are infected with strains with identical DNA fingerprints [6].

Studies reveal that HIV and tuberculosis affect each other

Sputum and blood samples obtained from 2100 patients in Chandigarh, India indicated a significant association between multi-drug resistant tuberculosis and HIV. After applying a multivariable regression analysis, which controlled the effects of previous treatment status, age, and sex, the study revealed that there was a high number of MDR Mycobacterium tuberculosis in the HIV seropositive group compared to the HIV seronegative group, with a p-value of 0.05. This suggests that there is indeed a correlation between the two diseases. This correlation indicates that individuals with HIV are more likely to have MDR TB in comparison to individuals without HIV. [7]. Another study also supports this correlation by revealing that there is a significant presence of HIV co-infection, of approximately 14.2%, in patients tested positive for tuberculosis. [10]. 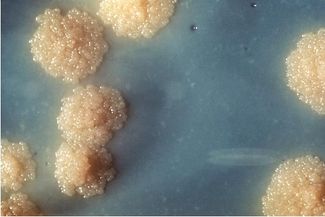 Figure 4 A sample sputum culture that would be collected in order to analyze clustering patterns. This was created in 1976. By Dr. George Kubica, at the CDC.

Another study also analyzed the correlation between TB clustering and HIV in order to determine whether HIV is associated with tuberculosis in individuals who were recently infected or in those who experienced reactivation of latent TB. This was done via a systematic review, which identified all studies focusing on TB clustering and HIV infection in communities with high HIV prevalence. This review confirmed the results of the aforementioned epidemiological study, and showed that clustering patterns were associated with recently transmitted tuberculosis rather than reactivated latent infection. This finding is important because it can impact how tuberculosis is treated in HIV endemic populations [9]. 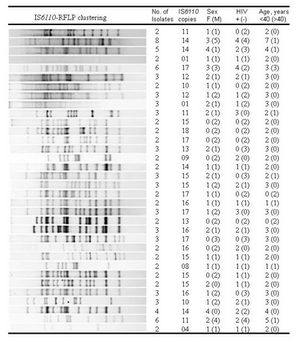 Figure 5 IS6110 DNA restriction fragment length polymorphism patterns do not suggest a significant correlation between clustering isolates and HIV status. Please click on image for enlarged text. This was created on February 5, 2009. By Dr. Asiimwe et al. from BMC Infectious Diseases.

In contrast, other studies reveal that there is no significant difference in culture analysis between HIV positive or negative individuals with tuberculosis [11]. For example, a study that also conducted a DNA restriction fragment length polymorphism analysis of Mycobacterium tuberculosis isolates, showed that there is no significant relationship (p value of 0.615) between clustered isolates and HIV status (Figure 5). Additionally, by assessing clustering in HIV positive and negative individuals, researches found minimal discrepancies in the level of DNA fingerprint diversity between the two groups of individuals. [12].

The CDC states that drug resistance develops in individuals who don’t take their medications regularly or correctly, develop tuberculosis after having taken medication for it in the past, and are in close contact with people who have drug-resistant tuberculosis (i.e. in hospital settings).

Further research suggests that HIV is closely associated with MDR TB, with a significant number (p value of 0.05) of MDR TB isolates found in cultures from HIV positive individuals (27.3%) compared to the number found in HIV negative individuals (15.4%) [7]. 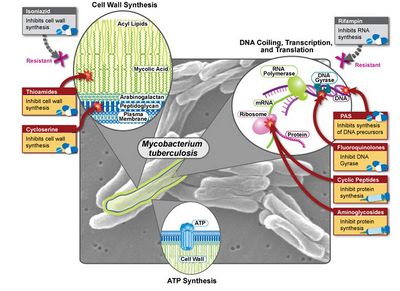 Figure 6 Effective general treatments for MDR TB. Please click image for enlarged text. The photo was created by Dr. Ray Butler and Janice Carr, at the CDC. The illustration was created by Krista Townsend, at the National Institute of Allergy and Infectious Diseases.

However, some studies show that HIV does not have significant effects on MDR TB development based on there being no difference found in sputum cultures of HIV positive and negative individuals with MDR TB [15]. Instead, these studies propose that MDR TB is greatly impacted by previous antibiotic treatments [11]. Individuals who have had previous treatments are five times more likely to develop MDR TB [11].

In addition to antibiotic resistance developing, studies show that the co-administration of tuberculosis and HIV medications may have adverse effects on individuals. This is due to pharmacokinetic interactions, toxicity, and the immune reconstitution inflammatory syndrome [14] Pharmacokinetic interactions include how well the drugs are absorbed by individuals with advanced HIV and how the drugs interact together. Proper drug absorption is crucial because studies show that individuals who absorb a lower concentration of drugs such as, rifabutin and isoniazid, are more likely to develop rifamycin resistance. Other studies also confirm the association between HIV co-infection and rifampicin resistance [10].

The discourse on the interactions of tuberculosis and HIV yields that more research needs to be done in order to more thoroughly assess the impacts the diseases have on each other and on antibiotic resistance. 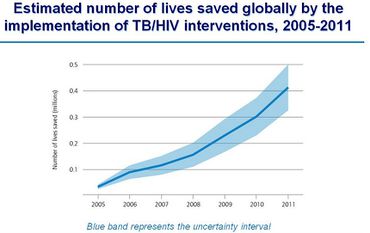 Figure 7 The implementation of HIV and tuberculosis interventions can significantly decrease the number of fatalities resulting from these diseases. This was created in 2011. By the World Health Organization (WHO).

So far, there is significant evidence that HIV affects recently transmitted tuberculosis more than latent infection. This means that greater care needs to be taken to prevent HIV patients, especially those with high viral loads, from being exposed to Mycobacterium tuberculosis. This can be difficult because there are high rates of coexistence of these diseases in developing countries, and HIV patients are often exposed to the bacterium in hospital settings. Ultimately, greater attention needs to be payed to HIV and tuberculosis interventions (Figure 7).

Additionally, there is a high prevalence of multi-drug resistant tuberculosis in HIV positive patients, which further implicates the co-infection of these diseases in adverse drug interactions and resistance. More research could reveal what drug combinations could be most effective for the patient by assessing and limiting pharmacokinetic interactions. This research could lead to new treatments that would prevent MDR TB from developing in HIV patients, consequently reducing fatalities.

I-National Center of Allergy and Infectious Diseases assessment of HIV and tuberculosis co-infection.

II-Set of guidelines on how to prevent MDR TB and XDR TB by the World Health Organization.

III-Interventions for HIV and tuberculosis co-infection by the World Health Organization.

IV-Recent publications about HIV and tuberculosis by the CDC.

VI-How to coordinate HIV and tuberculosis treatments so that pharmacokinetic interactions are minimized.

Edited by (Inna Tounkel), a student of Nora Sullivan in BIOL168L (Microbiology) in The Keck Science Department of the Claremont Colleges Spring 2014.