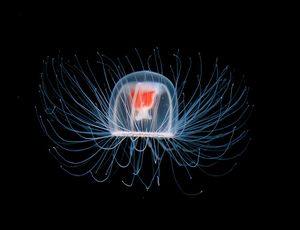 Turritopsis dohrnii (previously classified as Turritopsis nutricula),[1] commonly known as the immortal jellyfish or the Benjamin Button jellyfish,[2] is a small species of jellyfish known for its unique ability to revert back to an earlier life stage through transdifferentiation.[3][4] This ontogeny reversal renders the organism virtually immortal as this process has the potential to repeat itself indefinitely, although organismal death does still occur in its natural environment.[5] Reverse development can be triggered by a variety of stressors including starvation, changes in temperature or salinity, physical damage, or age-related deterioration.[4]

Although a rare ability, reverse development has been reported in several other Cnidaria species. Some of these include Laodicea undulata,[6] Aurelia sp.,[7] Hydractinia carnea,[3] Podocoryne carnea, Eleutheria dichotoma, Cladonema sp. and Cladonema uchidai, and Perarella schneideri.[5] However, these species can only undergo reverse development during the early stages of medusa bulb development. What makes Turritopsis dohrnii unique is its ability to revert after sexual maturation.[5]

Turritopsis dohrnii was first discovered in the Mediterranean Sea in 1883 by German marine-biology student, Christian Sommer, and was originally mistakenly classified as Turritopsis nutricula.[2][8] The species has since spread around the world to both the Pacific and Atlantic oceans due to it’s unique abilities for survival and international sea trade.[9]

The immortal nature of Turritopsis dohrnii makes it of interest for research in aging, cancer, and regenerative medicine. 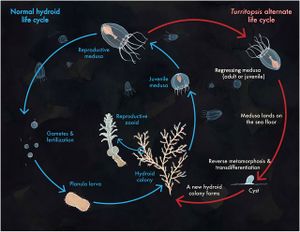 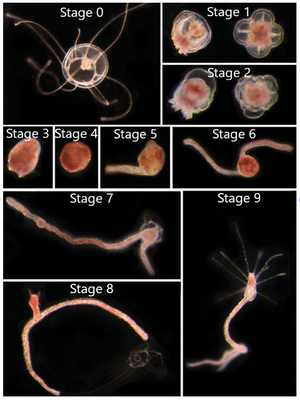 If produced sexually, the life cycle of Turritopsis dohrnii begins with planula larvae - fertilized eggs that settle on the seafloor.[11] From there, it develops into its hydroid stage. In this stage, it takes on the form of stolons and polyps that reproduce asexually to form a colony, and immature medusae then bud off of the polyps. Within 18 to 30 days, these medusae reach sexual maturity, characterized by the presence of at least 16 tentacles.[5][12] The mature medusae may then release gametes that form planula larvae if they undergo fertilization, repeating the cycle. However, unlike other species, this is not the only option Turritopsis dohrnii has for restarting the cycle (Figure 2). If faced with unfavorable conditions or physical stresses (such as starvation, changes in temperature or salinity, physical damage, or age-related deterioration)[4] in the immature medusa stage, the organism will skip the maturation and sexual reproductive stages and revert back to the hydroid stage. All mature medusae will spontaneously regress back to the hydroid stage as well, whether or not they face adverse environmental conditions.[5] This reverse development is likely the result of senescence-related stress.

The reverse development process can begin from either the immature or mature medusa stage (Figure 3, Stage 0). The first step in the process is the reduction of medusa features to create a “ball-like” stage (Figure 3, Stages 1-4), also commonly known as a cyst stage.[3] However, if the organism is in the transitional stage between maturity, characterized by the presence of 13-15 tentacles, there is a 20%-40% chance that the medusa will develop directly into the hydroid stage, skipping the cyst stages.[5] The next step in reverse development is stolon formation in which branches form off of the ball-like tissue (Figure 3, Stages 5-7). This step is followed by the formation of a polyp bud (Figure 3, Stage 8) and, finally, adult polyp formation (Figure 3, Stage 9).[3] From here, the polyp may asexually reproduce and produces buds that form new medusae. In this sense, Turritopsis dohrnii is “immortal,” as it does not die at the end of its lifecycle; it simply starts anew from an earlier developmental life stage. 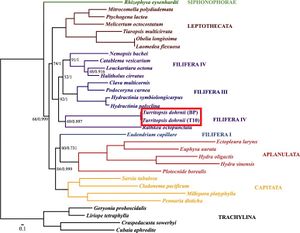 Analyzing which genes are expressed during the different stages of Turritopsis dohrnii’s reverse development can give insights into the genetics behind the species' unique biological immortality. Through RNA-sequencing and transcriptome assembly, Yui Matsumoto and her team analyzed gene expression during the medusa, cyst, and polyp stages. Genes related to DNA synthesis, DNA integration, DNA transposition, DNA repair (including telomere maintenance), metabolic processes, and synthesis of nitrogen-containing cellular compounds were over-expressed in the cyst stage compared to expression in the medusa and polyp stages.[11] These results suggest that DNA repair and transposable elements play a key role in the reverse development and regenerative properties of Turritopsis dohrnii. In contrast, there was under-expression of genes related to protein synthesis, synthesis of other cellular components, cell signaling and communication, cellular division, aging and lifespan, development, and cellular differentiation.[11] This makes sense with the reducing stages of reverse development and the simplification of the organism into the cyst stage.

Research on the microbiota of Turritopsis dohrnii has not been done; however, there is one interesting microbial relationship that is essential to Hydrozoan development. In order to progress from the planula larvae stage to the hydroid stage, Turritopsis dohrnii require an external signal from marine bacteria.[3] While the exact species of bacteria that induce metamorphosis in Turritopsis dohrnii has not been studied, there is research on the bacterial inducers for Hydractinia echinta, a closely-related Hydrozoan. In Hydractinia echinta, Alteromonas espejiana[14] and other Alteromonas species[15] are known to be strong inducers, but other common marine bacteria, including E. coli can also induce metamorphosis.[15] The presence of these bacterial signals are essential to Hydrozoan development as the planula larvae will not undergo metamorphosis without them.[14]

The exact mechanisms behind Turritopsis dohrnii’s biological immortality are still unknown to the scientific community, but with continued research, the answer is getting closer and closer. However, even if this biological mystery can be solved, there is no guarantee that this information can be related to human biology and medicine. Regardless, scientists are still hopeful about the organism’s potential for aging, regenerative medicine, and cancer research.