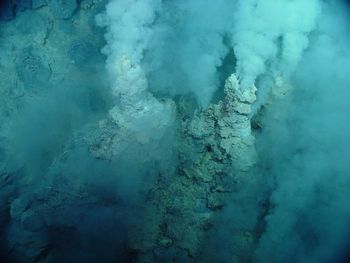 By Caroline Webster
Hydrothermal vents are chimneys formed by mineral precipitates that spew geothermally heated mineral rich water and are located on the sea floor near volcanically active zones, such as mid-ocean spreading ridges or hot spots. They were discovered in the 1970s by deep sea divers and are known for their interesting microbial communities and chemical habitat that could possibly have been the birthplace of life on Earth. Here, I discuss a specific type of hydrothermal vent, White Smokers.

White smokers are deep-sea hydrothermal vents located off-axis from mid-ocean ridges. Water plumes are high-pH (around 9-9.8) and typically 60-90˚C, though they can be as cool as 45-75˚C.[3][4] In a process known as serpentinization, white smokers form from superheated seawater that circulates in the ocean's crust, dissolving toxic minerals and gases. As pressure builds, the hydrogen and methane rich water is released through mineralized carbonate chimneys into contrastingly freezing ocean water, creating hot plumes. White smokers should not be confused with their more common relatives, black smokers, which are typically located directly along mid-ocean ridges and whose plumes are much hotter (around 360˚C). Black smokers are usually larger and gets their black color from iron monosulfide; white smokers emit lighter-hued chemicals such as barium, calcium and silicon. Furthermore, white smokers have porous axial zones white allows hot fluid to percolate outwards from all surfaces of the chimney, whereas black smokers release hot water from only the top chimney opening. [2][5]

Hydrothermal vents create unique conditions for microbial communities. Due to their deep-sea location, they exist entirely in darkness and support entire ecosystems from geothermal energy. Microbial communities are dominated by hyperthermophilic anaerobic archaea and bacteria [6]. Bacteria living in these plumes rely on chemosynthesis, converting minerals into organic material in the absence of sunlight. Due to the stark contrast between vent plumes and surrounding seawater, plumes are characterized by steep gradients. According to a study conducted Kormas et. al of a white smoker from the East Pacific Rise (9°N), the inner chimney walls, which can reach temperatures over 250˚C, are home to thermophilic and hyper-thermophilic prokaryotes such as methanogens, anaerobic hydrogen oxidizers, NO3/Fe/S°/SO4 reducers and fermentative heterotrophs [2][7]. Outer chimney walls come in contact with cool, oxygenated sea water and host a denser mesophilic community, white consists mostly of microbies that oxidize H2S, Fe, Mn and H2 along with aerobic methanotrophs [2] [8]. 16S rRNA gene clone libraries from the Kormas study were dominated by epsilon-Proteobacteria, Bacteroidetes, Thermales and Aquificales bacterial phlya along with hyperthermophilic Thermococcales, Archaeoglobales, Desulfurococcales and Thermoproteales archaeal orders. The superheated pyrrhotite-rich chimney center was populated only with epsilon-Proteobacteria that are related to mesophilic isolates. [2] 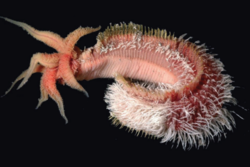 Information on key microbial players is derived from Kormas et. al 16S rRNA gene cloning and sequencing. The first key microbial player to mention is the Epsilon-Proteobacteria pyhla. Strains of Epsilon-Proteobacteria are mainly found in the chimney top, porous central orifice walls at the chimney top, and in the outer part of the middle chimney layer.[2] Cultured strains are described as mesophilic or moderate thermophlic chemoautotrophs [2] and "all strains use nitrate or oxygen as electron acceptors, and hydrogen, thiosulfate and elemental sulfur as electron donors". [6] [10]

Next, Kormas et. al identified Thermales and Aquificales are important hyperthermophilic bacteria players. They are found "located at the top chimney surface, the porous central orifice walls at the top of the chimney and the outer part of the middle layer". [2] Strains are closely realted to Oceanithermus profundus, a thermophilic microaerophilic and facultatively chemolithotrophic bacterium.[2][11] The closest cultured relative to Aquificales is Persephonella, "thermophilic, nitrate‐ and oxygen‐respiring, sulfur‐, thiosulfate‐ and hydrogen‐oxidizing chemolithoautotrophic bacteria" with optimal growth at 70-73˚C.[2] [12]

Bacteriodetes are another important player, found on the orifice walls, at the chimney base and outer middle layer.[2] Cultured members of the bacteriodetes phylum are non-thermophilic heterotrophs and very common in marine environments.

Some interesting symbiotic macrobes are also found near and inside the vent. For example, Rimicaris exoculata [13] (a deep sea shrimp) and Alvinella pompejana [14] (a Pompeii worm) were derived from symbionts of Alvinellid polychaetes [2] [14]. An extensive phylogenetic tree of bacterial and archaeal members found in the white smoker studied by Kormas et. al are shown below.

Implications for the Origin of Life

As early as the 1970s, hydrothermal vents have offered insight into the origins of life on Earth. It is widely believed that life on Earth evolved over 3500 Ma in after the big chemical evolution. During this evolution, chemical reactions among the ocean, lithosphere and atmosphere created the necessary conditions for complex molecules to emerge.[15] While it is still unclear how exactly organic compounds evolved, hydrothermal vents are a plausible geological context for where it could have happened. These vents provide the necessary concentration, geothermal and redox gradients to facilitate such reactions. [15]