A Microbial Biorealm page on the genus MacbethR

Describe the appearance, habitat, etc. of the organism, and why you think it is important. Rickettsia rickettsii is a small (0.3-1.5μm), rod-shaped, Gram-negative, obligate intracellular bacterium. The bacteria typically reside within ticks. A bite from an infected tick can cause infection in a mammal, and in humans R. rickettsii infection causes Rocky Mountain Spotted Fever (RMSF). R. rickettsii has only been identified in the Western Hemisphere, and it has been found in all 48 continental states in the U.S. except Maine (1). Established tick hosts of R. rickettsii in the US include the American dog tick, D. variabilis, the Rocky Mountain wood tick, D. andersoni, and the brown dog tick, R. sanguineus. The tick D. variabilis and thus R. rickettsii are commonly found in the eastern US deciduous forest biome (1,2). The Rocky Mountain wood tick, D. andersoni, is found predominantly in the Western US (10). 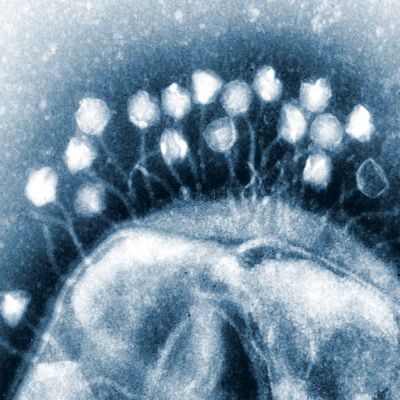 Image of R. rickettsii under microscopy (3).

Rickettsia rickettsii have a single circular genome (4). It contains 1,257,710 bases and 1,382 open reading frames (4,5). The guanine and cytosine content is 32% (5). The genomes of two strains of R. rickettsii have been completed: the Sheila Smith strain and the Iowa strain. The Sheila Smith strain is virulent and the Iowa strain is non-virulent (5).

The outer membrane of the R. rickettsii have two large surface proteins, rompA and rompB, with rompB being much more prevalent than romp A (6). The fraction of rompB:rompA is approximately 9:1 (6). Romp stands for rickettsial outer membrane protein (6).

R. rickettsii has a less then 125 nm slime layer and 16 nm microcapsular layer (7). The inner leaflet is 6.2 nm and the outer leaflet is 2.5 nm (7). The total cell wall is 13 nm, and its cytoplasmic membrane is 5.7 nm (7). R. rickettsii recruit actin at the surface of the bacteria cell to induce microﬁlament production and allow the bacterial cells to move within the host’s tissue cells (12). Also, their cells walls contain muramic acid (11).

Image of R. rickettsii cell under electron microscopy showing the inner and outer leaflet of the cell wall. The bar represents 0.25 μm (7).

Penicillin inhibits the growth of R. rickettsii and results in the formation of spheroplasts, which lack a fully developed cell wall (8).

The Rickettsia rickettsii divide by binary fission rather than a more complex developmental cycle, and they will oxidize glutamate to produce ATP (11).

The Dermacentor ticks, the prime carrier of Rickettsia, are thought to have originated in North central Asia and spread to North America. The R. rickettsii have been found and reported, through reported cases of Rocky Mountain spotted fever, in all 48 continental states in the US, except Maine. They have also been reported in Canada and Mexico. In Canada, human infection with R. rickettsii has been reported in British Columbia, Alberta, and Saskatchewa. In Mexico, human infection has been reported in Sonora, Sinaloa, Coahuila, Durango, San Luis PotosI, Nuevo Leon, and Veracruz. Antibodies to R. rickettsii have also been found in human serum from Costa Rica, Honduras, Nicaruaga, and Panama (1).

The distribution of R. rickettsii in the United States and Canada depend on factors affecting the tick and its host, such as deer, fox, or humans. For example, in Colorado studies have shown R. rickettsii reside primarily in shallow soils, moderate shrub coverage, exposed rock, steep slopes, pines, log litter, and grass cover; these conditions are the living conditions of both the arthropod (tick) and vertebrate host. The temperature and humidity have been shown to play a key role in R. rickettsii distribution as well. Relative humidity must be high enough to prevent excessive drying of ticks and their eggs, and ambient temperature must be high enough to allow the life cycle of the tick to be completed. The winter soil must also be cold enough to release the adults from the diapause that prevent the from feeding in the fall. The moist deciduous forest of the Eastern United States provides an ideal environment for (1).

In 2009, over 90 cases of Rocky Mountain Spotted Fever and R. rickettsii infection were reported in a new geographic location in Arizona. Approximately 10% of the people diagnosed with the disease in this part of the state have died. The tick responsible for transmission of R. rickettsii in Arizona is the brown dog tick (Rhipicephalus sanguineus) (2).

R. rickettsii initially infects the epithelial cells of the tick’s midgut, multiplies, enters into the hemocoel, and then invades and multiplies in other tick tissues including the salivary glands and ovaries (1). R. rickettsii replicate within the cytosol of the host’s cells and use the host cells’ actin polymerization machinery to spread themselves through other cells in the host (12). The ticks are then carried by vertebrate hosts, such as small mammals. A tick can also latch onto a human and start feeding by inserting its feeding tube and breaking the human skin. During feeding, some of the ticks saliva is transferred into the human, and thus the R. rickettsii can be transmitted within the tick saliva into the human to cause Rocky Mountain Spotted Fever (2).

Image of the life cycle of R. rickettsii (1).

Risk factors for Rocky Mountain Spotted Fever include recent hiking or exposure to a wooded area likely containing the ticks. The bacteria are more likely to be transferred after 20 hours of exposure to the tick carrying the bacteria (9).

The symptoms of Rocky Mountain spotted fever are typically seen 2-14 days after a tick bite and include: chills, confusion, fever, headache, muscle pain, abdominal pain, nausea, vomiting, conjunctival infection, and a rash. The rash usually starts a few days after the fever and first appears on wrists and ankles (1-5 mm in diameter). It then spreads to most of the body. Approximately 10% of infected people do not get a rash (2,9).

Image of an early stage rash in a patient with Rocky Mountain Spotted Fever (2).

Image of a late stage rash in a patient with Rocky Mountain Spotted Fever (2).

It has recently been discovered using transposon mutagenesis that an actin-based motility protein, Sca2 (surface cell antigen 2), is a virulence factor in R. rickettsii. When Sca2 was mutated in a guinea pig model, the R. rickettsii bacteria did not cause fever. Sca2 falls within a family of large autotransporter proteins, and when R. rickettsii contain an experimentally truncated version of Sca2, the bacteria do not show wild type actin based motility or production of fever in guinea pigs. Both RickA and Sca2 are necessary for actin-based motility. RickA has been proposed as the molecule responsible for directing actin-based motility in the members of the spotted fever Rickettsia. The RickA protein acts through localizing to the surface of the bacteria, activating Arp2/3 in vitro, and causing actin polymerization in vitro (12).