FIG 1. Salt lake in southern Russia filled with halophiles. Natronorubrum is present in many similar salt lakes in China, Inner Mongolia and Russia[3]. The carotenoids inside many Halobacteriaceae cause the red coloring and serve to protect DNA from damaging agents such as ionizing radiation and hydrogen peroxide[9]. Helmholtz Centre for Environmental Research UFZ.

Natronorubrum [Na.tro.no.rub’rum] was first proposed as a new genus in 1999 when traditional 16S rRNA sequence, and the additional DNA-DNA hybridization, lipid composition, and phylogenetic and phenotypic features identified it as a separate genus from other members of the family Halobacteriaceae[11]. And five species were later identified within the genus Natronorubrum: N. bangense, N. tibetense, N. sulfidifaciens, N. aibiense, and N. sediminis.

Natronorubrum means “red of soda”, derived from the Arabic word “natrun” meaning “soda” or “sodium carbonate”, and the Latin word “rubrum” meaning “red”[7]. The name accurately describes two key properties of Natronorubrum genus: salt-loving and red-purple morphology. Natronorubrum belongs to the class Halobacteria, which has only one order Halobacteriales and one family Halobacteriaceae[11], and it is comprised of the extremely halophilic members of the Archaea domain[4]. For example, this genus has a minimum salt requirement of 12% or 120g/L[7] , which is equivalent to 4 times the salinity of seawater. In addition, Natronorubrum microbes form red-purple colonies of approximately 2mm in diameter[11]. The bacterioruberin carotenoids present in the microorganisms is responsible for the red color3, and the color is a distinctive feature for many members of the family Halobacteriaceae. As a result, an abundance of halophilic Archaea present in hypersaline lakes often turns the water red[9] (FIG 1).

The genus Natronorubrum is discovered in many hypersaline lakes. It could be a significant contributor to the hypersaline lake ecosystem as an aerobic chemoorganotroph, using oxygen as electron acceptor, and organic compounds as electron donor and source of energy. Natronorubrum Strain HG-1 of unclassified species can also oxidize thiosulfate (inorganic sulfur compounds) to tetrathionate during heterotrophic growth with acetate. This ability is widespread in Bacteria but previously found only in thermo-acidophilic Archaea. This reaction increases heterotrophic growth, by mechanisms not clearly understood, but thought to provide additional energy yields[10]. The discovery of Natronorubrum contributes to our understanding of the Archaea domain and the alkaline lake ecosystem.

The complete genome for Natronorubrum has not been mapped at this current time. Only the DNA G+C content and the 16S rRNA partial sequences have been analyzed for each species. Natronorubrum is defined to have G+C content between 59.9-61.2mol%[7]. N. sediminis, however, has G+C content of 61.9mol% and 62.5mol% for the two strains discovered[5], exceeding the current description of Natronorubrum. Note that the publication on N. sediminis postdates the last amendment for the genus Natronorubrum. This demonstrates our limited knowledge of this genus and possible modifications to the genus description in the future.

All 5 species’ 16S rRNA analyses have more than 95% consistency with each other[5], which is the conventional method to map phylogenetic trees and within the acceptable value for genus classification. However, some scholars argue that based on 16s rRNA alone is not a completely accurate way to classify microorganisms. The DNA dependent RNA polymerase B’ subunit genomic sequencing might serve as a better phylogenetic map, because it is highly conserved and present in only one copy in Bacteria and Archaea, as opposed to multiple copies of 16s rRNA gene in some microorganisms. Natronorubrum tibetense might represent a new genus according to a recent study using this method because it shows less than 50% bootstrap support in the rpoB’ gene tree[6]. Future full genome mapping might help to settle this debate.

All Natronorubrum are pleomorphic, with triangular, square, polygonal or disc shapes, flat, and stains Gram-negative. The cells are 0.8-3.6um in size and form red colonies approximately 2mm in diameter after one week of growth in laboratory settings. Similar to many members of its family, Natronorubrum expresses C20-C25 and C20-C20 polar lipids, derivatives of phosphatidylglycerol (PG) and phosphatidylglycerol phosphate (PGP). They may also contain triglycerosyl diether-1 (TGD-1) and additional unidentified glycolipids in the membrane. Natronorubrum are strictly aerobic and chemoorganotrophic, and can be motile or non-motile. Natronorubrum can grow on a variety of sugars including glucose, sucrose and maltose, depending on the species. All are oxidase positive and catalase positive. Natronorubrum microbes are extreme halophilic, growing in at least 12% NaCl at pH 8-11. The cells lyse in distilled water. The cells grow at a temperature between 20°C and 55°C[7] [11]. Each Natronorubrum species has different optimal growth conditions within these ranges, as well as slightly different antibiotic resistance, cell structure and metabolism needs (Table 1). Unfortunately, no further information could be found at this time on the details of Natronorubrum life cycle, such as generation time, cell division, and proteins used for these processes. 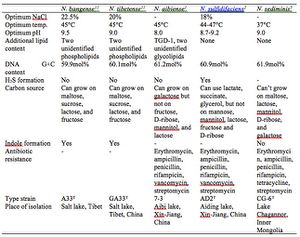 Table 1. Summary of individual Natronorubrum species. This original figure is a summary of each species within the defined range for Natronorubrum, demonstrating the variability among members of the genus. More detailed and conclusive information can be found in the original research papers defining each species.

Natronorubrum strains are isolated from several saline lakes in Tibet, Xin-Jiang, Inner Mongolia of China and the Kulunda Steppe of Russia. Saline lakes are divided into aerobic and anaerobic layers. There are a dense population of cyanobacteria, and some aerobic organotrophs and aerobic sulfur oxidizers in the aerobic layer[12]. Natronorubrum, as a aerobic sulfur oxidizer and organotroph, is a contributing member of the sulfur and carbon cycle in the salt lake ecology. Microbes of the family, similar to Natronorubrum, are also found living in saline soils, subterranean salt deposits and solar salterns, and even saline microniches in non-saline environments[3]. This indicates the possibility of Natronorubrum bacteria being present in these environments as well.

One interesting environment that Natronorubrum is unable to survive on is Mars, as one research has proven. With the current interests towards finding microorganisms that can survive on Mars and the moon, some phylogenetically related halophilic microorganisms are reported to survive simulated Martian conditions. Natronorubrum’s ability to oxidize thiosulfate into tetrathionate would be advantageous to survival on sulfate heavy Mars. Unfortunately Natronorubrum strain HG-1 of unidentified species failed to survive under ultraviolet radiation, low temperatures, desiccation and exposure to Mars soil analogue[8]. This is to be expected since this genus is obligate aerobe.

Natronorubrum is not known to cause any disease within animals, plants, or humans.

Fig 2. A Map of major basins found around the globe. Areas colored in grey and black are the major saline basins and lakes. They are all potential places where Natronorubrum exist. Lake Scientist.