The Asian Long-horned bettle (Anoplophora glabripennis) is a wood-borer that attacks and kills a wide diversity of both weakened [8] and healthy hardwood trees including more than 20 types of deciduous trees [11]. Wood is composed of highly cross-linked lignocellulose, which is resistant to break down [2]. Therefore, for biodegradation of lignocellulose, A.glabripennis carries a broad diversity of symbiont microorganisms in its gut that produce essential enzymes. These gut microorganisms consist of a community of diverse bacterial species and a single fungal species. 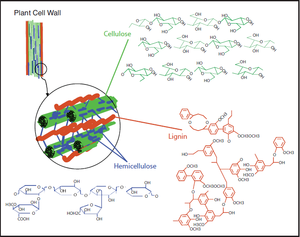 Lignocellulose in plant cell wall is composed of cellulose (≈ 45%), hemicellulose (≈ 25%) and lignin(≈ 1-35%). Cellulose is a linear polymer of glucose with β-1,4 glycosidic bonds. It has extensive hydrogen bonding that hold the molecule in a crystalline structure making it inaccessible to hydrolytic enzymes. Hemicellulose is also linked by β-1,4 linkages with different side groups such a sugars, sugar acids and acetyl esters which prevent the molecule from forming a homogenous crystalline structure [8]. Lignin is an aromatic macromolecule [2] made of Phenylpropanoid units in a condensed structure with more than 12 types of chemical linkages. The insoluble property of lignin makes it resistant to most forms of biodegradation [8]. 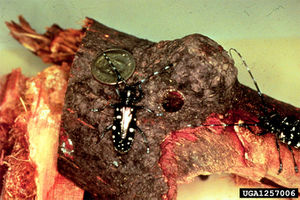 The Asian long-horned beetle, Anoplophora glabripennis is a wood-feeding insect in the family Cerambycidae [10]. A.glabripennis is a large shiny black beetle with several white spots on its back and long, segmented antennae with alternate black and white colors. A.glabripennis is native to eastern China, Korea and Japan and was first introduced to the United States and Canada in the early 1990s by ways of global trading [1]. They can colonize a broad range of deciduous trees such as maples (Acer), horsechestnut (Aesculus), elms (Ulmus), poplars (Populus), willows (Salix), mountain ash (Sorbus) and hackberry (Celtis) [12]. Adults feed on the leaves and tender barks of small branches [1].The female beetles chew through the barks and create oviposition sites to place the eggs. They secrete some additional fluid with the eggs to secure them and prevent them from desiccation [6]. After the eggs are hatched, larvae first feed on the phloem and immature xylem. As they develop, the beetles chew tunnels through the sapwood and heartwood and feed on mature woody tissue.

A.glabripennis can have important roles in ecological processes such as carbon and nitrogen cycling in natural systems [10] by attacking the dead or dying trees and contributing to the degradation of decaying wood tissue [3]. However, they can also be damaging to healthy trees. These insects can kill healthy trees by cutting off the transport of nutrients and water by creating tunnels in the woody tissue. Their activity also disrupts the integrity and the structure of the infested tree [1].Treating of large infested trees with pesticides or insecticides is practically difficult. Furthermore, they cannot eliminate the beetle because of its protected habitat within the inner wood [10]. The only effective way of eradicating these beetles is to cut down, burn or chip the infested trees. Consequently, thousands of ornamental trees and shade trees were eliminated in North America to eradicate the beetle [9]. These hardwoods were important in providing shade, shelter for some birds and animals and filtration of air pollutants and oxygen production. A.glabripennis is a serious threat to local forests in North America. It is estimated that the beetle can significantly change the composition of hardwood forests if it spreads throughout the country [9]. 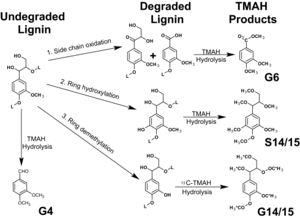 Degradation of cellulose requires the activity of three classes of glycosyl hydrolases: endoglucanases, exoglucanases, and β-1,4-glucosidases. Other glycosyl hydrolases and xylanases are required for the degradation of hemicellulose. Exoglucanases break the cross-linkages of the plant cell wall. Endoglucanases and xylanases break the long chain polymers into smaller chains. β-glucosidases cleaves these short chains into monomeric sugars. To access the carbohydrate component of the lignocellulose, the lignin barriers need to be overcome. Lignin degradation consists of oxidation or cleavage of side chains, ring demethylation, and ring hydroxylation [4].

Lignocellulose degradation in Cerambycids and other common wood-feeding insects

Lignin limits the accessibility of cellulose for degradation by digestive enzymes. Many Cerambycids, have the ability to produce endoglucanases and glycoside hydrolases to disrupt random β-1,4 linkages in cellulose chains and hydrolyze β-1,4 linkages in cellobiose disaccharides. However, they cannot produce exoglucanases to break the lignin barrier. Like other common wood-feeding insects such as termites, they overcome this barrier by feeding on previously degraded wood or by establishing exo- or endo-symbiotic relationships with food degrading microbes [4]. In both the beetle and termite guts, significant levels of lignin ring demethylation and side chain oxidation occur by the gut bacterial community. In some cerambycides, in addition to the gut bacterial communities that are also commonly found in termites, they have established fungal symbiosis that facilitates the degradation of living woody tissue [4]. In A.glabripennis, a single symbiont fungal species Fusarium Solani is found in its gut that has the ability to digest lignocellulose and extract nutrients from woody tissue [11]. 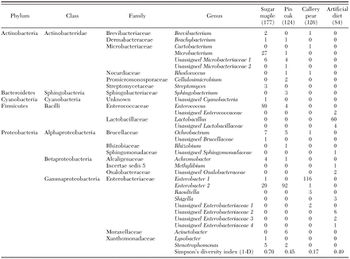 Soft-rot fungal species associated with the gut of A. glabripennis [4 ]

A.glabripennis grows in the high lignin content inner wood. Lignin is low in accessible nutrients such as carbohydrates.A.glabripennis uses endosymbiont microbes located in its gut, bacteria or fungi, to extract the nutritional carbohydrates from lignocellulose. These insects’ guts also provide optimal conditions for the activity of these microbes [4]. The gut microbial community enables A.glabripennis to occupy habitats with inaccessible nutritional resources in the form of lignocellulose by making the nutrients more accessible to the insect. The bacteria isolated from the gut of A.glabripennis are identified to be members of actinomycetes, α-proteobacteria,β-proteobacteria,γ –proteobacteria, Firmicutes, and Bacteroidetes [10]. A wide range of actinomycetes seems to possess extracellular peroxidase activity break the lignin inter-unit linkages [2]. Gut bacterial composition of the insect differs during its different life stages [6] and between different host tree species [5] in a way that allows the organism to develop in its habitat and perhaps to overcome host defenses. In a study, the gut microbial composition of A.glabripennis was measured from colonies reared in three different host trees or artificial diet. The results showed how the host tree affects the gut microbial community complexity [5]. Some of these bacterial species are either vertically passed during the oviposition from the adult female beetle to the egg, or derived from the environment during development of the insect. During the oviposition process, the female insect also manipulates the environmental microbial communities in the niche by depositing some bacteria species in their fluid secretion with the eggs. These microbial communities are important for the survival and development of the offspring [6].

Some cerambycids that feed on weakened or stressed trees seem to digest lignocellulose using the enzymes produced by fungus-infected wood. However, adult A.glabripennis and the larvae can also feed and grow in the inner wood of healthy hardwood trees, not invaded by fungi. A single strain fungal species, Fusarium Solani, is associated with the gut of this insect, and produces hydrolases that facilitate complete degradation of lignocellulose [11]. F.solani produces efficient lignin-degrading enzymes that aid the insect to digest lignocellulose in the gut [7]. By Phylogenetic analysis, it is shown that this fungal species and other identified cerambycids related fungus fall into the “soft rot” degrading fungi phylum [4].