High levels of atmospheric carbon dioxide pose a huge environmental challenge in our industrialized world and scientists have been looking for ways to somehow trap or reuse the CO2 being emitted as a result of human activities. One method utilizes carbon sequestration, which is a way to mineralize CO2 and store it deep underground. Some scientists have taken it a step further by attempting to mineralize CO2 into a form useful for building materials. They have done this by utilizing a genetically engineered mutant of Saccharomyces cerevisiae, or ordinary baker's yeast. 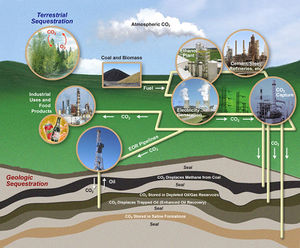 Outlining the Carbon Storage Program in the United States. http://fossil.energy.gov/programs/sequestration/overview.html

There have been many efforts to somehow channel this increasing amount of atmospheric CO2 to more harmless or even more helpful forms. One method is carbon sequestration, in which CO2 is captured from industrial facilities, transported via pipes and then injected underground deep into porous rocks underground which are then blocked from the top by non-porous rock (EPA, 2013). This essentially traps the CO2 underground permanently. This sequestration can pose some geological safety and security concerns and there are a limited amount of sites that can safely store CO2 and these sites must then be monitored to ensure there is no leakage (EPA, 2013). Some MIT researchers have recently developed a new method to capture carbon dioxide while also putting it to good use. They have used baker’s yeast, or Saccharomyces cerevisiae, to convert carbon dioxide gas into carbonates useful as building materials (Trafton, 2010). After capturing the carbon dioxide in water, it is then combined with mineral ions to form solid carbonates (Trafton, 2010). Although yeast do not perform this conversion on their own, they have been genetically engineered by these researchers to express genes found in snails such as the albalone who build their own hard shells composed of calcium carbonate from carbon dioxide and mineral ions found in their marine habitats (Trafton, 2010). The genes they have utilized code for enzymes that facilitate the mineralization of carbon dioxide (Trafton, 2010). This experiment holds promise as it “can produce about two pounds of carbonate for every pound of carbon dioxide captured” and “captures carbon dioxide at a higher rate” than processes companies have used to convert CO2 to solid building material (Trafton, 2010).

Bricks made from CO2 would potentially solve two problems- sequester excess atmospheric CO2 and eliminate additional CO2 emissions that result from traditional brick-making. Although this team of researchers are not the first to propose CO2 sequestration, they do seem to have developed an efficient technique. “It involves no chemicals or temperature changes, unlike chemical solidification methods” (Trafton, 2010). The researchers want to make the process efficient enough to deal with large amounts of CO2 to be useful in an industrial setting such as a factory or power plant. 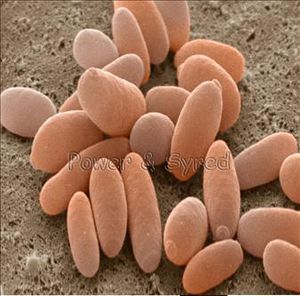 Saccharomyces cerevisiae is a type of single celled fungi. It is commonly used in baking and brewing alcohol and is also known as “the budding yeast”. It is a popular organism to work with because it is easily cultured, grows very rapidly, has had its entire genome sequenced, allows for easy replica plating and mutant isolation, and because it is easily usable for genetic engineering/ transformation. Yeast are also nonpathogenic and bakers’ yeast is cheaply and widely available. This yeast consists of small oval/ elongated cells, which are about 5-10 micrometers in diameter (Sherman, 2004) .They are enclosed by a two-layered cell wall, the cell’s most noticeable structures are the nucleus and a large storage vacuole (Sherman, 2004). Saccharomyces cerevisiae can have an asexual or sexual life cycles (Sherman, 2004). In the more commonly occurring asexual cycle, the haploid cells of the yeast undergo mitosis and creating more identical haploid daughter cells. The diploid cell undergoes mitosis to form zygotes (Sherman, 2004). Diploid cells are more able to tolerate extreme environmental conditions. To ensure the inhibition of sexual reproduction, an isolated a haploid cell type is used (Sherman, 2004). Saccharomyces cerevisiae ability to survive in the presence or absence of oxygen and ability to reproduce asexually or sexually allows it to thrive in many diverse environments (Sherman, 2004). Haploid strains of saccharomyces cerevisiae allow for the isolation of recessive mutations whereas diploids allow for complementation tests allowing for the identification of any gene from plasmid libraries (Sherman, 2004). Plasmids can be inserted into yeast cells as long as there are partial homologous segments in the genome (Sherman, 2004). The phenotypes of the yeast arising after insertion of foreign genes has allowed us to understand the function of many foreign genes and even bring them about in yeast for other purposes as the researchers discussed earlier are doing (Sherman, 2014). 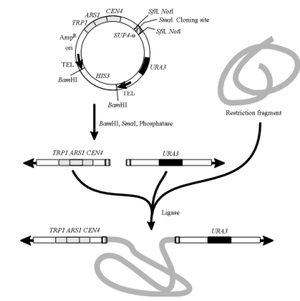 A yeast artificial cloning system in a plasmid allowing for recombinational targeted cloning of a gene. The DNA flanking the gene(s) of interest is from a linearized plasmid that contain targeting segments that are homologous to the termini of the DNA segment that is to be cloned. http://www.microbio.uab.edu/bedwell/Lectures/reading.pdf

Yeast may prove to be a viable organism to facilitate the mineralization of carbon dioxide into solid material that is useful in construction work. It is an interesting and what seems a quite useful feat in genetic engineering.