How and when Spiroplasma poulsonii selectively kills male Drosophila flies is a key part of understanding their host-pathogen relationship. Several papers have been published trying to uncover the specific pathway of male-killing that the bacterium causes. The dosage compensation complex (DCC) and programmed cell death, apoptosis, are two important portions that may be involved in the pathway. 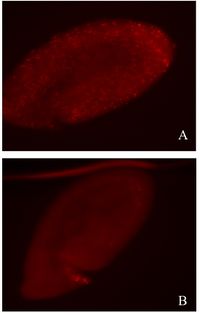 S. poulsonii-infected D. nebulosa (A) male and (B) female embryos, 5 to 7 hours after egg laying. Shows apoptosis occurring in increased amounts in male as compared to female. Figure by Bentley et al., 2007

Drosophila males differ from females by their number of X chromosomes; males have a single X while females have a pair. This genetic discrepancy is balanced through the hypertranscription of the male X chromosome by the dosage compensation complex. In females, a protein called Sex-lethal (SXL) inhibits the production of DCC components, preventing unnecessary dosage compensation. Male flies do not express the proper form of Sxl, and SXL cannot affect DCC components. Four proteins in the DCC have been tested using loss-of-function mutations. Mutant fly lines with these DCC components reduced or absent showed a reduction in male-specific lethality. This demonstrates that the DCC must be functional for Spiroplasma to successfully target and kill developing male flies. (Veneti et al., 2005)

The other potential mechanism that causes male embryonic death is an increased number of male embryonic cells undergoing apoptosis, resulting in overall organism death. It has been found that male D. melanogaster embryos infected with the bacterium development slowed between stage 10 and stage 13 in embryogenesis and completely arrested in stage 13 about 10 hours after egg laying. Before stage 13, male embryos showed an increased amount of apoptotic cell death as compared to females. Apoptosis in uninfected individuals begins naturally at stage 10, the stage at which infected male embryos begin to die, suggesting that apoptosis is affected by the Spiroplasma bacterium. (Bentley et al., 2007)

As Spiroplasma-infected D. melanogaster females undergo embryogenesis and larval development, the amount of the bacteria within the organisms steadily increase. When the hosts emerge as adults and begin to age, the amount of bacterium present increases exponentially until it peaks at 3 weeks and begins to decrease. The sex ratio of the offspring produced by newly emerged females (1 day old) is not fully biased towards females, with approximately 36% of their offspring being males. However, after 24 hours primarily all emerging offspring are female. (Anbutsu and Fukatsu, 2003.)


A threshold density hypothesis can be applied to Spiroplasma infection dynamics, which suggests that the expression of the male-killing phenotype is reliant on the bacterial density within the host mother. An estimated threshold density of 6x108 copy equivalents of a Spiroplasma gene per adult female. (Anbutsu and Fukatsu, 2003.)


Two possible explanations can account for how the infection level of the mother is correlated to the male-killing phenotype. If a mother is host to a large amount of bacteria, this may result in the transfer of more bacterial cells to her offspring, which, if above a certain threshold, may cause male-specific death. A second method may be that the bacteria within the host mother create a factor that, when passed on to male embryos, causes male death if it is above a specific threshold. (Anbutsu and Fukatsu, 2003.)

Edited by Jennifer Martin, a student of Nora Sullivan in BIOL187S (Microbial Life) in The Keck Science Department of the Claremont Colleges Spring 2013.