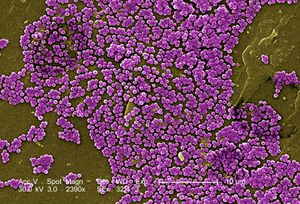 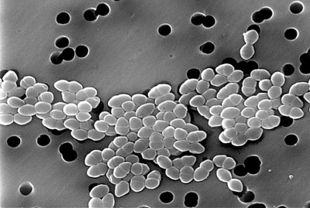 Benzalkonium chloride (BAC) is a major non-alcohol-based active ingredient used for clinical, food line, and domestic household biocides (16,19). A biocide is a general term for a chemical agent, that may be applied topically in/on living tissue (antiseptic) or on inanimate objects (disinfectant), in order to inhibit growth of (“-static”) or kill (“-cidal”) microorganisms (20).

In communities where people are in constant contact with one another and surfaces covered with microorganisms, hand hygiene is important for infection control (16,26,30,31). Studies found the use of antiseptic hand sanitizers subdued the prevalence of the common cold, acute respiratory syndromes, gastroenteritis, viral influenza, and more (1,14,17,24,26,27,31). Similarly, this practice is important in limiting hospital-acquired, or nosocomial, infections between patients and clinical staff by limiting spread of opportunists like Pseudomonas aeruginosa, methicillin-resistant Staphylococcus aureus (MRSAs), and vancomycin-resistant Enterococcus (VREs) (4,8,12,16,18,29).

For such preventative measures, there are a variety of hand sanitizers available with alcohol-based and alcohol-free antiseptic agents including ethanol, triclosan and benzalkonium chloride (16,20). Recently alcohol-free hand sanitizers with triclosan or benzalkonium chloride have been gaining ground due to concerns that ethanol is dries out the skin, is too toxic, and there are frequent cases of intentional ingestion (9,13,16) Additional concerns involve the extensive use of antiseptics risking the selective survival of antiseptic resistant pathogens, which may be simultaneously selecting for antibiotic resistance (10,21,25,29). This theory of simultaneous or “cross-selection” suggests that selection of either antiseptic or antibiotic resistance will also select for the other, ultimately resulting in weaker antibacterial therapy and pressure for careful use of both biocides (1,7,25,28). Despite speculations of evolving resistance mechanisms, BACs are extensively used biocides especially efficacious against enveloped microorganisms (16,19,20). 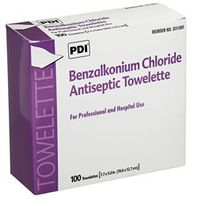 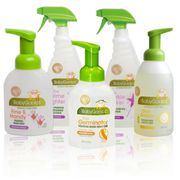 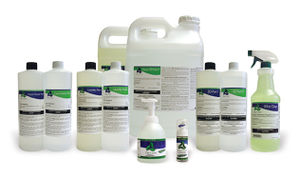 Dephyze is a benzalkonium-chloride based foaming hand sanitizer brand that claims to have a 99.999% microbe kill rate. 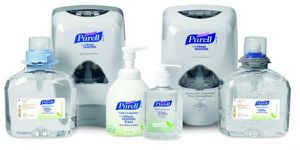 Purell is an ethanol-based antiseptic hand sanitizer advertised to kill 99.99% of hand microbes within 15 seconds. 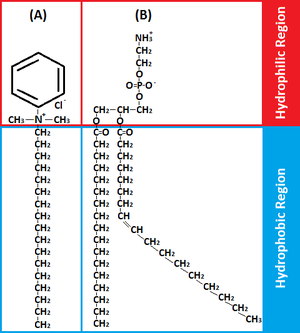 Since the discovery of penicillin, research of antibiotic mechanisms garnered much attention with widespread studies dissecting details of resistance against vancomycin, β-lactams, and other antibiotics (12,15,32). In contrast, studies on the mechanistic details of particular antiseptics remains largely inconclusive aside from the generality that antiseptics have less specific activities at multiple targets compared to antibiotics (18, 20). This broad level of activity is well summarized by McDonnell and Russell (1999), as the antiseptic first interacting with the cell surface, then penetrating into the cell, and finally acting at intracellular target sites. Sheldon (2005) further suggests that the details behind each antiseptic depend on the biocide’s chemical nature, the pathogen, and the test conditions (including but not limited to antiseptic concentration, pH, time of exposure, and temperature). In this way, antiseptic mechanisms lack mechanistic details, but the general activity is still well agreed upon.

BACs are classified as Quaternary Ammonium Compounds, which are positively charged derivatives of ammonium compounds with the chemical formula NR4+, where R can be different carbon-hydrogen containing groups (23). QACs are commonly used as antiseptic agents because of their cationic amphiphilic property, having a distinct hydrophobic and hydrophilic region, resulting from nucleophilic substitution of alkyldimethylamine and benzyl chloride (10). BAC’s hydrophilic cationic region destabilizes the pathogen’s surface by forming electrostatic interactions with negatively charged components (10,20,32). These interactions effectively outcompete the divalent cations, which normally stabilizes surface structures by linking adjacent negatively-charged components (10,20,32). Once close contact is accomplished by the hydrophilic region, the BAC’s hydrophobic region proceeds to penetrate the hydrophobic bilayer to cause cell leakage and lysis (10,19,20). The ultimate effect of BACs is to damage the pathogen’s membrane, thus for bacteria, disrupting essential cell processes like ATP synthesis or solute uptake (20). Therefore BAC’s amphiphilicity is critical in interacting with and perturbing target membranes for efficacious antimicrobial action. 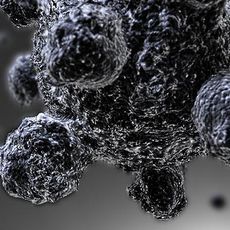 A three-dimensional image of the surface of an enveloped measles virus.

General comparison of Gram-positive (a) and Gram-negative (b) bacterial cell wall structure.

Staphylococcus aureus is a Gram-positive bacterium that can survive on antiseptic-free hands for at least 150 minutes, which is enough time for it to spread and persist as a leading cause of nosocomial infections (16). However, S. aureus is readily killed with BACs because their cell walls are chiefly composed of slightly-negatively-charged peptidoglycan and techoic acids (10,20). These surface structures also lack effective permeability properties and allow uptake of more BACs and other antimicrobial substances (10,20).

Despite suggestions that the non-specificity and multiple target range of antiseptic mechanisms minimizes selective pressure for resistant species, it is generally thought that widespread use has indeed selected for antiseptic resistance as found with antibiotics (12,20,29). Currently suggested antiseptic resistance mechanisms uncannily resemble those conferring antibiotic resistance: enzymatic degradation of antiseptic agents, biofilm formations, active efflux, and impermeability (29,32). Generally, these mechanisms may originate as either an intrinsic (natural) or acquired property (by genetic mutation or horizontal gene transfer) of the microorganism (20). In the case of rapidly growing microorganisms, beneficial mutations are selected for then stabilized in a growing population resulting in acquired resistance (20,22). Additionally, studies are finding that genes encoding resistance components located on mobile genetic elements (eg. plasmids or transposons) may be transferred from one microorganism to another, as is the case with Staphylococci carrying QAC-resistant plasmids encoding efflux pumps (3,7,25). Therefore in response to antiseptic action, different microorganisms exhibit these aforementioned intrinsic and acquired antiseptic resistance mechanisms. 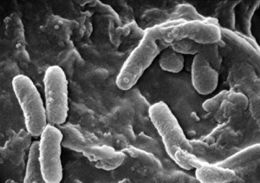 In particular, impermeability by additional or architecturally-complex surface layers in addition to the cellular membrane are commonly exhibited by a variety of microorganisms that render BAC less efficacious (18,20). Not only is BAC prevented from causing cell lysis, but the uptake of BAC and other active agents in hand sanitizers is severely inhibited (20). Therefore, even at high concentrations, BACs tend to be “non-cidal” and are rather bacteriostatic, mycobacteriostatic, and sporostatic (20).

Pseudomonas aeruginosa is a Gram-negative bacterium with reduced sensitivity to BACs, and is of clinical importance as a common opportunistic pathogen causing nosocomial respiratory tract infections like pneumonia (5,6,20,). Generally, Gram-negative bacteria like P. aeruginosa are less permeable to QACs than non-sporulating, non-mycobacterial Gram-positive organisms (6,20). This marked difference in uptake regulation by Gram-negative bacteria is mediated by structural differences including an outer membrane, porins, and efflux pumps (16,29). While inner membranes have a conventional phospholipid bilayer, the outer leaflet of an outer membrane is composed of lipopolysaccharides (LPS) (32). The outer membrane’s reduced permeability is a result of strong LPS-LPS lateral interactions, where a highly anionic “R-core” region on the LPS links interacts with soluble cations to link LPS molecules together (see Fig#) (16,29,32). The outer membrane’s hydrophobic core has greater London disperson forces as LPS has up to seven hydrocarbon tails per molecule compared to two per each phospholipid molecule of the inner membrane (32). Small porins studding this outer membrane facilitates diffusion of hydrophilic solutes, but can strictly restrict larger molecules of BAC (16,29). Additionally, efflux proteins in the inner membrane may actively pump out BACs that make it past the outer membrane (mechanism not covered in this wiki, see "efflux pump" for details) (16,29). Although P. aeruginosa is only a model organism and there have been reports of BAC efficaciously destructing the outer membranes of other Gram-negative species, P. aeruginosa maximizes BAC impermeability as an antiseptic-resistance measure (19). 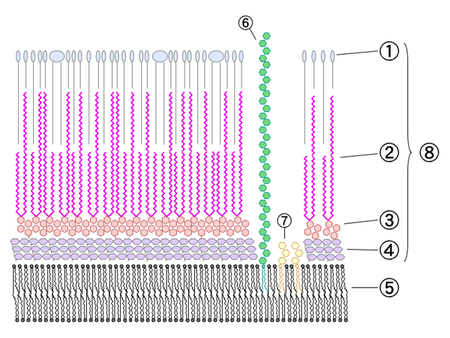 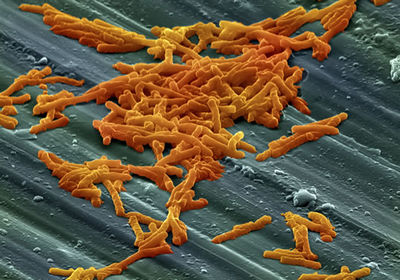 Clostridium difficile is a major spore forming bacteria, causing 15-55% of all nosocomial diarrheas (16,18,20). Similar to Gram-negative and myco- bacteria, additional impermeability layers of complex spore coat(s) hinders the permeability and activity of BACs (20).

10.Fazlara, A., and Ekhtelat, M. 2012. The disinfectant effects of benzalkonium chloride on some important foodborne pathogens. American-Eurasian Journal of Agricultural & Environmental Science, 12 (1): 23-29.

16.Kampf, G., and Kramer, A. 2004. Epidemiologic background of hand hygiene and evaluation of the most important agents for scrubs and rubs. Clinical Microbiology Reviews, 17 (4): 863-893.