A Microbial Biorealm page on the genus Varicella zoster virus 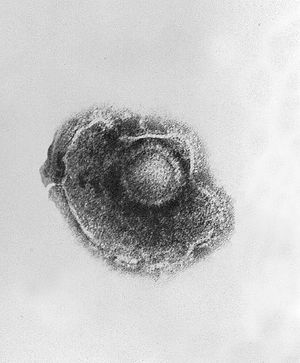 The isolation of Varicella Zoster Virus was first published in 1958. This virus is the causative agent of chicken pox, a disease characterized by a blister-like rash on the skin and often accompanied by fever. This disease is highly contagious, transmitted by sneezing or coughing, direct contact, or aerosol transmission of virus from skin lesions. This is known as varicella.

After recovering from the varicella disease, a person may develop shingles, also known as zoster or herpes zoster, due to the virus remaining in the dorsal root ganglia. Shingles is characterized by a painful rash on one side of the body, typically preceeded by pain, itching, or tingling in that area. It may also be accompanied by fever, headache, chills, or upset stomach. The risk of developing shingles increases with age, especially after 50 years of age. Almost 1 out of every 3 Americans will develop shingles, and 1 million cases are estimated to occur in this country each year.

Disease caused by the Varicella Zoster Virus can be prevented by the varicella vaccine; two doses of the vaccine are recommended. People who have been vaccinated may still get the disease, but if they do it will be milder, and there is a much lower chance of such infection. Before the vaccine became widely available (1995), an estimated 4 million cases of varicella occured each year in the U.S.; rates have decreased by 53-88% as of 2004.

Varicella zoster virus has a variable genome size (from just above 124,000 bp to more than 126,000 bp), but the obtained sequence published consisted of 124,884 base pairs containing 70 genes distributed roughly equally over the two DNA strands. G + C content is 46.02%.

The genome is a linear double-stranded DNA molecule made up of two segments (L and S) joined covalently. Each segment comprises a unique sequence (100,000 bp in L, 5,232 bp in S) flanked by a large (7319.5 bp, in S) or small (88.5 bp, in L) inverted repeat. These terminal repeat components have higer G + C content, which is common in herpesvirus genomes. A small proportion of virions have been reported to contain superhelical circular DNA molecules.

In analysis of the genome, splicing was predicted to be rare in the VZV genome due to imprecise consensus splice acceptor and donor sites and analogy with another herpesvirus, HSV-1, which has only 4 spliced genes confirmed. However, the possibility could not be reasonably dismissed.

Of the 71 protein-encoding open reading frames predicted, ORFs 42 and 45 are represented as a spliced transcript, resulting in 70 genes, three of which are duplicated in the S-segment inverted repeats, so only 67 identified genes are unique.

The gene layout of VSV is similar to that of HSV-1, but 6 HSV-1 genes have no counterpart in VZV, and many local differences exist.

The virion of VSV is made up of a nucleocapsid surrounding the genome, separated by a protein tegument from the lipid envelope (which incorporates the major viral glycoproteins). VSV is the smallest human herpesvirus.

Varicella zoster virus is strongly associated with cells, and is not released at any phase of replication in cell culture. To enter cells, VSV attaches like HSV to heparin sulfate proteoglycan on the cell surface, then binds a second, low-affinity receptor. Replication is associated with viral protein expression (within 4-10 hours) and formation of multinucleated giant cells (within 2-7 days). The virus is highly sensitive to temperature, and is inactivated at 56-60 degrees Celsius.

Infectivity is species-specific; the virus may infect some non-human primates and small animals such as rats, but such infection does not result in VZV disease.

Chicken pox, caused by the varicella zoster virus, is characterized by the varicella rash. This rash is due to replication in epidermal cells, reached through cell-associated viremia (although the exact mechanism of transfer to skin cells is not known). Once in the skin, infectious material passes between contiguous cells.

The varicella lesions develop through maculopapular (vasculitis involving small blood vessels, fusion of epithelial cells), vesicular (progressive "ballooning" degeneration of epithelial cells, fluid-filled spaces between cells, and more infected cells at the base of the lesion), and crusting phases. The lesions appear as a clear blister surrounded by an irregular zone of erythema--"dewdrop on a rose petal" appearance. Prodromal symptoms may appear 24-48 hours before skin lesions appear, particularly in older children and adults. Even without complications, systemic symptoms of fever and fatigue may result.

Unlike other herpesviruses, varicella zoster virus is transmissible through respiratory routes. It is highly contagious, and is transmissible 24-48 hourse before symptoms are readily apparent. Primary infection has a long incubation period (10-21 days, generally 14-16 days).

Shingles, also known as herpes zoster, results form varicella zoster virus latency in dorsal root ganglia. Symptoms of shingles include a vesicular rash, generally localized to the dermatome of a single sensory nerve (most often thoracic dermatomes). The rash is typically preceeded by several days of localied pain and frequently hypersensitivity. The lesions resemble those of varicella, although vasculitis may be more pronounced. Even without a rash, acute unilateral neuropathic pain may be diagnosed as shingles. Inflammation and necrosis from this reactivation may extend into anterior horn cells, negatively affecting motor function. This infection may also cause the death of primary neurons, resulting in chronic pain. In healthy individuals, the affected dermatome can heal completely in as little as 2 weeks (often 4-6 weeks), though in 5-10% of patients hypersensitivity persists for several months.

Varicella zoster virus can be cultured in cell culture with many types of human tissues (embryonic skin-muscle and foreskin tissues were used in the original isolation) as well as Rhesus monkey testis or kidneys (though somewhat less effectively); other species (rabbit, chick, bovine, porcine) are not as effective.