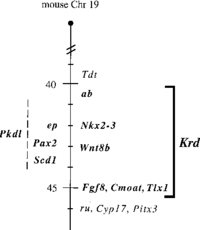 A linkage mapping of homeobox genes in mouse chromosome 19, through the use of interspecific backcross analysis.

The novel homeobox gene, Vax1, is a member of the Emx/Not gene family, which plays an important role in the growth and development of the vertebrate, forebrain, olfactory, and visual systems of mammals when expressed. In 1998, the researchers at the Max Planck Institute for Biophysical Chemistry in Germany determined that the Vax 1 gene mediates the activation of transcription factors.[1] The gene Vax1 directly regulates the activation of transcriptional factors, such as Emx2, a protein coding gene that is necessary for the development of the neural and ciliary structure of the frontal systems of the roof and archipallium of the brain during early development. Through the use of interspecific backcross analysis in mice, crossing a hybrid with one of its parents or an individual genetically similar to its parent, the Vax1 genome was accurately mapped on the distal regions of the mouse chromosomal region, located on mouse chromosome 19. Therefore, Vax1 is directly linked to the homeobox genes, Pax2, Fgf8, MxiL, Emx2, and Aop1, which are located on the same chromosome 19. [1] [2] Due to the mutation of the Vax1 homeobox gene, the development of the forebrain and optic nerves would express phenotypical impairment in mammals. Phenotypical impairments, expressed due to the presence of mutations of the Vax1 genome, include neurodevelopmental delay, decrease in the eye/optic nerve size, and labial malformations. [3]

The Vax1 homeobox gene is a DNA-binding transcription factor classified in the Emx/Not genome family and located on the mouse chromosome 19 and human chromosome 10. The Vax1 homeobox genome is located in the nucleus of both somatic and germline cells. The Vax1 genome encodes for a homeodomain region, classified as a class of homeobox genes present in vertebrates. Vax1 primarily affects the embryo development and morphogenesis of an organism. It is classified to have 3 enhancer regions, and 2 promoter regions. Vax1 is highly specific in function, having properties of initiating DNA Binding and activation of linked transcription factors such as Vax2 and Emx2(both are in the same genome family as Vax1). This allows Vax1 to induce biological processes such as cell differentiation, proliferation, organization, and major system development. According to the MGI database, the Vax1 homeobox gene has a major impact on the phenotypical expression of organ systems in mammals. Vax1 effects phenotypical expression of biological systems such as the cardiovascular, nervous, and olfactory system of mice.[4] It has been registered in a public database, mice with a specific mutation in the Vax genome labeled Vax1tm1b(KOMP)Mbp tend to experience the phenotypic trait of abnormal sinus arrhythmia. This is defined by an irregular heartbeat, increasing or decreasing the rate the organism inhales or exhales.[5] 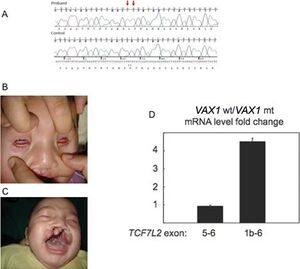 Phenotypic mutation of Vax1 expression due to the homozygous inheritance of the successive nucleotide substitution c.453G>A and c.454C>A. [3]

There are various mutations in the Vax1 homeobox gene in the human chromosome 10, such as successive nucleotide substitutions c.453G>A and c.454C>A, that lead to drastic malformations of the olfactory system of mammals, causing an range of detrimental phenotypic characteristics. These genetic diseases would include anophtalmia and microphthalmia. In a published paper lead by Anne M. Slacorinek 2011, one of the first case studies was presented, researching the phenotypic impact Vax1 homeobox genes has on human organisms rather than mice. With the use of an active case study, a male offspring who suffers from a successive nucleotide addition mutation, inhibits the proper function of the Vax1 genome leading to physical impairments such as orofacial clefting, and microphthalmia. These physical malformations in the olfactory system of the human body are clear examples of the major role the Vax1 homeobox gene plays in the development of the optic nerve and its hybridization during the embryonic stages of a mammalian organism.[3][6] 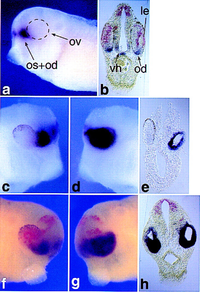 Vax1 expression is positively regulated by the X-bhh enhancer, leading to increased expression of Vax1 in the optic stalk and discs in the eyes. [1]

In addition to physical impairments caused by point mutations in the Vax1 genome, inactivation of the Vax1 genome would result in permanent stunted growth of the forebrain, impairing the development of cognitive functions. When the patient was reviewed at the age of 3.5 years old, it was found he had global developmental delays equivalent to that of a six month old child. It was determined that there was the absence of the Corpus Callopsum, revealing a lack of nerve fibers that connect the two hemispheres of the brain. The absence of the Corpus Callopsum can create severe developmental delays, such as cerebral palsy, severe intellectual learning disabilities. Furthermore, the brain MRI scan of the patient revealed an absence of normal ocular globes. However, the right ocular globe, was replaced with a fluid filled cyst.[3]

In recent studies, a mutation that leads to the inhibition or removal of the Vax1 homeobox gene also leads to the loss in GnRH neurons in the brain. This causes a neurological defect in the hypothalamic pituitary gonadal axis, leading to the prevention of the secretion of the hormone gonadotropin-releasing hormone (GnRH), ultimately reducing the fertility levels in mice. Because Vax1 is classified as a homeodomain transcription factor that overlaps with the development of GnRH during embryo development of mammalian organisms such as humans and mice, it suggests that the Vax1 homeobox gene could have clear effects on the development and synthesis of neurons in the brain responsible for GnRH regulation. It was also discovered that mice with the heterozygosity for the Vax1 mutation had a 88% total reduction in motile sperm, leading to sub fertility. These results reflect on the impact Vax1 homeobox gene has not only on the organisms olfactory and neurological aspects, but also its reproductive germ line cells.[7] This ultimately effects the ability of the organism to reproduce and produce viable offspring.

The Vax1 homeobox gene is required for the development of the forebrain, neuro and olfactory systems of mammalian organisms. With novel research focusing on the phenotypical effects, Vax1 mutations directly result in mammalian organisms, such as mice and humans, to develop various genetic malformations during the embryonic stage. Examples include IHH and Kallmann syndrome, two rare genetic disorders that affect the fertility of an organism. However, 50% of those cases have been noted to lack a point of origin. In 2014, it was discovered that the Vax1 homeobox gene has a direct impact on the fertility of organisms, and the reduction of GnRH neurons. Being a novel homeobox gene, Vax1 remains a dialogue of controversy, due to the limited amount of research in its function and structure. However, there has been a clear connection between the inhibition, or removal of the genomic sequence leading to a stunted growth in brain development during the embryonic stages.