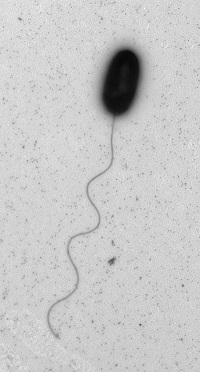 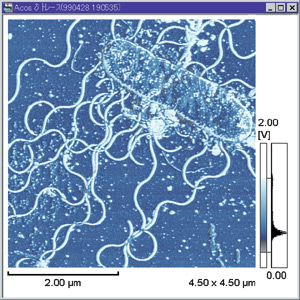 Organisms from the Vibrio genus were first observed by Filippo Pacini in 1854, and were further described by Robert Koch in 1883. The species V. alginolyticus emerged on the scene as a result of the need to further classify another Vibrio species, Vibrio parahaemolyticus. V. parahaemolyticus historically had included two biotypes, but it was suggested by Zen-Yoji et al. in 1965 the second biotype be moved into its own species. In 1968, Sakazaki et al. proposed a new name for the biotype species: Vibrio alginolyticus. V. alginolyticus would later be isolated in 1997, as a result of a pathogenic outbreak in Russia.9, 12

V. alginolyticus can be “comma” or coccoid shaped and is Gram negative.7 There are a few different strains, many of which are pathogenic. V. alginolyticus displays a single polar flagella in liquid media, but when the bacteria is introduced to solid media, morphogenetic changes occur to produce numerous lateral flagella (see photo).2

Vibrio organisms belong to the larger prokaryotic branch of Proteobacteria. V. alginolyticus itself is closely related to the Vibrio species of V. cambellii, V. parahaemolyticus, and V. proteolyticus, based on 16S rRNA sequencing.2

The complete genome of V. alginolyticus has been sequenced by Illumina high-throughput sequencing.4 The genome was revealed to have a total size of 5,406,094 bp and G+C content of 44.71%. The genome has 4,644 coding genes present. The complete sequence was deposited at GeneBank under the ascension numbers CP016224 and CP016225.

While Vibrio species do vary greatly in their nutrition and growth requirements, one feature shared by all members of this genus is that they are halophilic, requiring the presence of Na+ to grow.2 V. alginolyticus has an absolute salt requirement, meaning it will not grow unless in the presence of salt. For V. alginolyticus the minimal concentration of NaCl required for optimal growth is approximately 200-260mM.2 Most Vibrio species prefer a pH range of 7-8 for optimal growth, at a temperature of 18-22 °C.

Vibrio alginolyticus was originally a biotype of V. parahaemolyticus, due to many similarities, but the differentiating factor was V. alginolyticus' ability to ferment sucrose.10 The bacteria is able to utilize citrate and other sugars as a carbon source, and also can produce extracellular enzymes which degrade DNA, RNA, proteins, lipids, and a variety of carbohydrates.2 V. alginolyticus in particular has been shown to be able to utilize d-glucose, d-maltose, d-trehalose, d-fructose or N-acetyl-d-glucosamine as its sole carbon source. 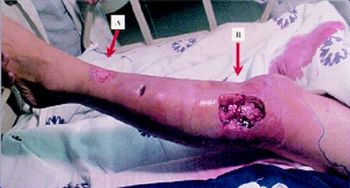 Vibrio alginolyticus is also pathogenic to humans, known to cause gastroenteritis and other infections of the gastrointestinal tract.2 Additionally, V. alginolyticus has been isolated from soft tissue infections in humans, and there have been reported cases of humans contracting diseases as severe as necrotizing fasciitis following infection from V. alginolyticus, though most commonly the infection is gastroenteritis, otitis media, and otitis externa.3 Depending on the severity of the infection, simple antibiotics may be all that is required, and treatment tends to be focused more on the comfort of the patient, especially in the case of gastroenteritis. Cases are associated with the consumption of raw seafood or exposure of a wound to brackish water which may be housing V. alginolyticus.2

The complete genome sequence of Vibrio alginolyticus' was published late 2016,4 due primarily to the need for further research into the bacteria. V. alginolyticus is responsible for significant mortality and economic losses in many commercial fish, and the researchers responsible for the genome sequencing wanted to respond to the threat posed by V. alginolyticus. By sequencing the complete genome, the researchers were able to identify many coding, non-coding and pseudogenes, which the researchers hope will contribute to further study of the bacteria, as well as prove useful for comparing V. aglinolyticus to other vibrios.

In addition to genome sequencing, another article published in 201211 revealed the prevelance of V. alginolyticus in Bangladesh. The researchers took sediment samples from three costal areas and six rivers in Bangladesh, and, after characterization and differential tests, were found to contain V. alginolyticus cells. These cells were tested for antibiotic susceptibility, and their effect on a species of fish. It was found that V. alginolyticus is only susceptible to one of the six commonly used antibiotics tested, nalidixic acid, and resistant to the others. It was noted that the mortality of the fish increased with increased concentration of V. alginolyticus, where infected fish were able to infect healthy fish. The researchers argued that one of the virulence factors for V. alginolyticus might be an extracellular toxin, and proposed that a characterization of this toxin could be a potential start for further pathogenicity research.

10. Sakazaki R. Proposal of Vibrio alginolyticus for the biotype 2 of Vibrio parahaemolyticus. Japanese Journal of Medical Science and Biology. 1968;21(5):359–62.

Authored by Parker Morris, a student of CJ Funk at John Brown University