The genome of Vibrio splendidus consists of two circular chromosomes. The larger of the two, chromosome 1, is 3299 kb, and it contains 199 out of 205 of the minimal gene set. Chromosome 2 is 1675 kb long and is subject to more frequent genome rearrangements than chromosome 1, in which there is a higher conservation of gene order. Although differing in size, chromosomes 1 and 2 have similar G+C contents (44.03% G+C and 43.64% G+C, respectively) [7].

Few mobile elements exist in the genome of V. splendidus. Chromosome 1 houses one RS1-like phage and 8 transposons, and chromosome 2 contains one transposon as well. Because all DNA repair enzymes are present in the organism, the high genotypic diversity between strains of V. splendidus is most likely not to be the result of a missing repair pathway. Rather, because it contains several genes that play a role in transformation competence (including those coding for a type IV pilus assembly complex and a putative DNA binding protein), it has been suggested that natural transformation may be one of the sources of high genomic polymorphism [7].

One surprising finding regarding the organism's genome is the nature of its chromosomal integron; in some strains of Vibrio splendidus, it is very small, while in others, it is completely absent from the genome. Prior to this finding, the chromosomal integron was thought to be a universal feature of all species in the Vibrio genus [7].

Vibrio splendidus is a gram negative bacterium. It is rod-shaped, and has perichous polar flagella with sheaths. It is also bioluminescent, and for optimal growth it requires a salt concentration between 300 and 400 mM Na+ [9].

V. splendidus is chemoorganotrophic in nature, obtaining its energy and carbon from organic compounds. Its metabolism is facultatively fermentative; it makes ATP through aerobic respiration when oxygen is present, but it can also switch to fermentation when not in the presence of oxygen [8].

V. splendidus is also capable of metabolizing alginate, a linear block copolymer of uronic acids b-D-mannuronate (M) and a-L-guluronate (G). It contains a class of enzymes known as alginate lyases (Alys) which catalyze the depolymerization of alginate into oligomers through an endolytic b-elimination reaction. These oligomers can then be broken down further into unsaturated monomers by the exolytic enzyme oligoalginate lyase (Oal). The monomers produced here spontaneously rearrange into 4-deoxy-L-erythro-5-hexoseulose uronic acid (DEH), which is reduced into 2-keto-3-deoxygluconate (KDG) by DEH reductase (DehR). Using KDG kinase (KdgK) and KDG-6-phosphate aldolase (Eda), KDG eventually yields pyruvate and glyceraldehyde-3-phosphate [4]. 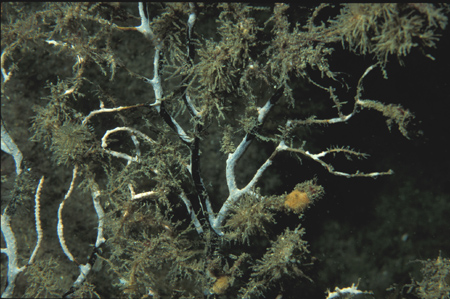 Vibrio splendidus a planktonic vibrio species found in oceanic environment. It is a facultative anaerobe that has strains that have been found to be culturable in a lab environment. It has been found to be extremely prevalent in the gulf coast where it is able to be sampled out of most open water in the gulf.[11] V. splendidus strains have been found that emit a sort of bioluminescence that is visible in high cell concentration areas. A study has found that V. splendidus and Vibrio harveyi are so closely related that a site specific probe for V. harveyi was also found to hybridize with V. splendidus, although the true phylogenetic relationship between these two organisms is still unknown.[11] Vibrio Spendidus is a bioluminating organism. This means that the light it emits is not actual emitting a lot of thermal radiation.[12] It is commonly accepted that nearly 90% of marine animals emit some sort of bioluminescence, so just that fact could show how common this organism may be in aquatic environments. This light that is emitted by the organism can offer many benefits to any animal that chooses to uptake this microbe and associate it with itself.[12] It is speculated that the light could be used as an attractant luring prey in, as a deterrent keeping predators away or even simply a light source that allows the animal to see things that reflect the certain wavelength of light that V. splendidus is emitting. It is still not very well known what else this organism may be doing in marine life.[11]

The Vibrio splendidus' metallo protease gene Vsm is hypothesized to directly contribute to this organisms toxic effect on oysters . Other research is attempting to determine the toxic effects of this gene product on bivalves and to further determine its pathogenic ability [3]. V. splendidus has also been found to cause vibriosis in marine life.[10] Vibriosis in one of the most common diseases that is contracted by marine life, usually effecting sea life found in shallow waters during mid to late summer months.[10] By ingesting marine life that has this disease, vibriosis can be spread to humans. When contracted by humans, vibriosis exhibits many of the same symptoms as food poisoning such as nausea, vomitting, abdominal cramps and chills. When trying to care for someone with suspected vibriosis, just ensure they get enough fluids and the diseases should subsides in 3-4 days. Although hospitalization is rare, it can occur do to severe dehydration.

Wargacki, A., et al. Science. 2012. Engineered E. coli for the microbial degradation and metabolism of alginate present in brown macroalgae used for the production of ethanol. 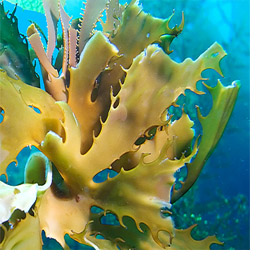 Vibrio splendidus contains a 30 kilo-base pair fragment which codes for the molecular machinery needed for the transport and metabolism of alginate [4]. These cellular processes have the potential to greatly contribute to the production of biofuel from brown macroalgae [1].

Common substrates used for the production of biofuels, such as corn and sugar, present issues regarding production efficiency and competition with the production of food [4]. Current microbial technological research is being performed to address the cost and metabolic requirements to make use of the sugars released from recalcitrant polysaccharides found in other substrates such as brown macroalgae [5].

Brown macroalgae does not compete with food crops for the use of landmass, fertilizer or fresh water [4]. It is estimated that 59 dry metric tons/ha of this substrate can be produced per year and the estimated bio-ethanol activity from this crop is 19,000 liters/ha/year [4]. This ethanol yield is two-times greater than that of sugar and five-times than that of corn [4].

The alginate transport and metabolizing pathway found in V. splendidus was reconstructed by creating a fosmid library using fragments of the Vibrio splendidus genomic DNA coding for the desired pathway and transforming it into E. coli [4]. It was reported that this engineered organism could produce ethanol at levels over 80% of the estimated maximum yield [4].

[11] Mealson K.H., Wimpee C, Wimpee B. "Identification of Vibrio splendidus as a Member of the Planktonic Luminous Bacteria from the Persian Gulf and Kuwait Region with lux,4 Probes" APPLIED AND ENVIRONMENTAL MICROBIOLOGY. 59:2684-2689, 1993