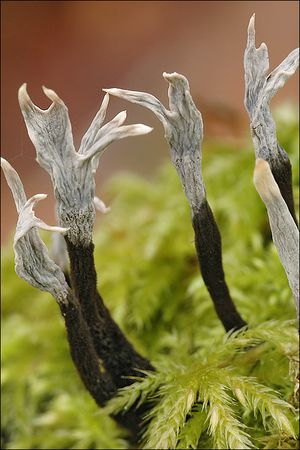 Their fruiting bodies are dark brown to black with antler-like white tips which blackens as ascospores within asci that develops flask like perithecia in the surface.. The small bumps are the locations of sexual spore production called perithecia. [3] The fungus specializes in consuming polysaccharide – glucan and other content compound of the timber that binds the cellulose and lignin together to form wood. This allows insects and other small creatures to feed on the remainder of the nutrient in the wood. Some of the fungus are simple spikes but mostly branch like antlers with a small stroma of 2 to 8mm in diameter at the base and 3 to 5cm tall. The base is the black and the tip the asexual is that of the white with conidia. [1]

The fungi appears throughout the year but it is more noticeable during winter and autumn at this time, the whole fruiting body turns black and also habitat to gregarious to clustered on rotting wood. [1] X. hypoxylon also contains a carbohydrate-binding protein, a lectin, with a unique sugar specificity, and which has potent anti-tumor effects in various tumor cell lines, The pyrone derivative compounds named xylarone and 8,9-dehydroxylarone also have cytotoxic activity and several cytochalasins, compounds that bind to actin in muscle tissue, have been found in the fungus. [4]

Page authored by Abigail Somuah, student of Mandy Brosnahan, Instructor at the University of Minnesota-Twin Cities, MICB 3301/3303: Biology of Microorganisms.