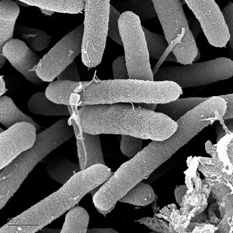 Bacterial ice nucleation has been an area of study which began around the 1980s. Species of Pseudomonas were found living on the surface of many crops. Further study provided a correlation between presence of Pseudomonas syringae and freezing of crops. It was soon thought that these microbes played a role in plant damage during cold temperatures.

Further analysis on this particular species Pseudomonas syringae, showed that there was a particular membrane protein which had the ability to act as a nucleation site, called ice-nucleating proteins (INPs). These nucleation sites allowed water molecules to become particularly aligned in order to promote freezing. Similar to a catalyst, the increase in number of nucleation sites promoted freezing at higher temperatures. With the new technology of genetic manipulation in the early 1980s, bacteria which had a mutation in this particular protein resulted in a lower freezing temperature of water droplets on the surface of plants.

This topic has many implications with the current society and its food crisis with starving countries. The weather is a massive determinant in crop harvests around the world. The fight against frost seems like a helpless battle. When plants are exposed to below-freezing temperatures ice crystals can form, causing many growth implications and tissue damage. On crops harboring the epiphyte Pseudomonas syringae, temperatures at which freezing occur usually range from 0-5°C [15]. Commercial preparation of a mixture of naturally occurring Ice- strains is now available for control of frost injury on some crops [16]. Could this be a possible solution for preventing freezing at near-freezing temperatures in crops around the world? Current studies of bacterial ice nucleation are also trying to link the weather to microbes in the upper atmosphere. As aerosol particles, bacterial cells can act as cloud condensation nuclei to form cloud droplets. There is a great deal of future study in these areas, as the weather affects all of earth’s surface inhabitants.

As a Gram-negative, rod-shaped, obligate aerobe, Pseudomonas syringae is one of 78 species that have been described in the Pseudomonas genus (Figure 6)[5]. As an epiphyte, it grows non-parasitically by plants where it derives its nutrients and water from floating dust, rain, etc [10]. This species can be found on tomatoes and beans to rice and tobacco, and is responsible for more surface frost damage to plants than any other mineral or organism [7]. Its affiliation as a plant pathogen in a large variety of plants makes this particular bacterium important in the field of food and biomass production, and is an important focus for the Department of Energy [1]. P. syringae is a very stress-tolerant organism, and is the focus of many studies of stress-tolerant gene expression. Kurz et al., (2010) used biochemical approaches to address water stress tolerance in P. syringae[6]. They showed that different osmolytes differentially contribute to water stress tolerance and interact at the level of transcription.

This bacterium can reside on plant surfaces without harming the plant itself. When water freezes however, the bacterium live off nutrients expelled from the host. Different species of these flagellated, motile bacteria infect leaves and tissues of a wide range of hosts, but can be specific to a particular location of an individual. For example, Pseudomonas syringae pv. aesculi is able to infect vascular tissue to cause cankers in European horse chestnut in northwest Europe, but does not infect leaves, buds, or flowers on the same individual (Figure 5) [2]. Some have also identified genes which are only expressed when the bacterium is on plants, which represent a ‘hidden genome’ not very well studied due to the absence in culture [1]. Although there is variation with each pathovar, this bacterium grows optimally in cool, wet conditions from 15-25°C. It is proposed by Hirano et al. (1987) that momentum from falling raindrops is responsible for initiation of rapid growth and the forming of massive colonies on host surfaces [8]. This has been seen as a method of how these bacterial cells are able to spread infection from plant to plant. This can also however, prevent infection by washing off bacterial cells from yet-infected surfaces. 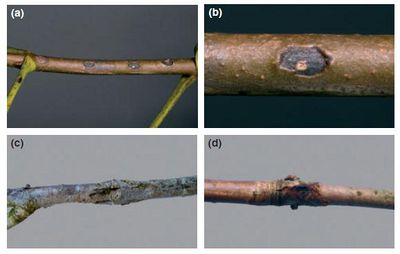 This particular species of Pseudomonas has been the subject of a large array of studies over the past 35 years with its involvement in crop freezing. The majority of frost-sensitive plants usually suffer from damage between -2 and -5oC [11, 12]. When water gets this cold, water turns into ice in both inter- and intracellular ways, causing frost damage. P. syringae express a particular type of surface protein, ice-nucleation protein (INP), which increases temperatures to which water is able to freeze. In the absence of sites capable of ice nucleation, the cold water can supercool and freezing will not occur until the temperature is low enough for the most active ice nucleus available is able to catalyze crystallization of supercooled water[4]. Thus, supercooling instead of ice-nucleation could be a mechanism of frost protection.

P. syringae is a species of bacteria very important to present-day society, particularly with the ever-increasing population of planet earth. Chronic hunger affects 820 million people worldwide, killing 25,000 people every day, one child every eight seconds [13]. Large quantities of crops are lost every year are lost due to frost such as in the state of Florida, where 40% of the world’s orange juice supply is grown [14]. A large area of interest with Pseudomonas syringae focuses on genetically engineering these bacteria with ice-nucleation-minus proteins. Without these proteins it is thought the temperatures tolerable by plants may be decreased.

All proteins interact with water, but there are two classes in particular which have a function relating to ice: antifreeze proteins (AFPs) and ice-nucleation proteins (INPs). AFPs have particular structures known to inhibit formation of ice crystals, while INPs do just the opposite. INPs can be seen affiliated with the production of artificial snow [8]. Pure water can be supercooled to -40oC in the absence of a heteronucleus [9]. INPs are able to promote ice formation by raising the nucleation temperature, and in vitro this temperature can range from -14 to -2oC depending on the number of proteins that cluster together.

In order to promote freezing, this particular species of bacteria has membrane proteins protruding into extracellular space that position water molecules in a particular orientation. Graether and Jia (2001) attempted to present a model of INP from Pseudomonas syringae based on comparison with two newly determined insect AFP structures [3]. They analyzed the INP sequence of ~60 16-residue repeats similar to a different model organism, and proposed a 16-residue loop for P. syringae (Figure 1). Their result suggested that insect AFPs and bacterial INPs may have a similar B-helical structure, even though they have opposite effects on water molecules. From here, the proposed structure should be confirmed by invitro studies. 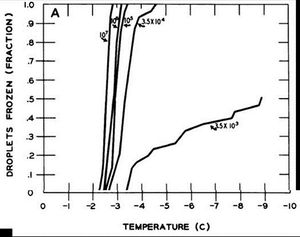 [Figure 2]
Proportions of frozen droplets with respect to temperature at Pseudomonas syringae concentrations of 107, 106, 105, 3.54, and 3.53. Cells were grown on nutrient agar and suspended in sterile water at appropriate concentrations. Source: Lindow et al., 1982. 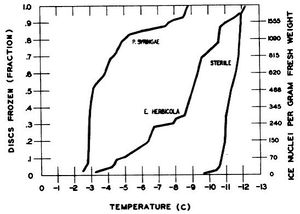 In mutant lines of P. syringae which are ice-nucleation inactive (Ice-) have been genetically engineered and used in a variety of studies [22]. Competition for limiting resources such as space and nutrients on leaf surfaces was suggested as a mechanism by which Ice- bacteria may prevent buildup of incoming Ice+ strains. With the use of potato plants, reduced population sizes of Ice+ bacteria treated with Ice- strains correlated with reduced amounts of frost injury during a natural radiative forest event. Thus, biologists are concerned that an introduction of bacteria with genetic mutation on the INA proteins might be detrimental to the survival of the original species.

The use of ice-nucleating bacteria has already been seen in uses for creating artificial snow to protection of crops from frost during growing seasons. On a larger scale, IN bacteria has been studied in the atmosphere.It is proposed that Pseudomonas syringae from plant surfaces are often emitted into the atmosphere [17]. Ice nucleation active strains have been detected in rain and snow, as well as in the atmosphere [18, 19]. This suggests that they may be disseminated through the global water cycle. Bacterial ice nucleation is an important area of study in the initiation of precipitation, and with particular species nucleation can occur at a range of temperatures. Mohler, et al. (2008) conducted a study investigating five different bacterial species in the range of -5 to -15oC and their correlations to condensation [20]. In this study, bacterial cells were suspended in aerosol phase using the Aerosol Interaction and Dynamics at the Atmosphere facility in Germany. Growing water droplets and ice particles were sensitively detected using in situ light scattering and depolarization, which measures the depolarization of polarized light at a particular wavelength scattered from particles in the center of a large, cold cloud chamber. Infrared extinction spectrometers were able to detect and characterize water droplets and ice clouds. As a result, the IN active cell fraction was calculated from the ratio of ice particle number concentration to number of total cells in the chamber. The bacteria investigated were IN active between -7 and -11oC. This chamber resembles similar conditions to what is seen in the lower atmosphere, and proves that IN active bacteria are able to form ice crystals. From this data, future studies should test different concentrations of IN active bacterial cells in this chamber and record when the initiation of precipitation occurs through the ice phase. This might help create a realistic approach towards comparing amounts of bacteria present in the atmosphere with how efficiently they create rain or ice droplets. More studies are needed to measure distribution, sources, and bacterial cell concentration in the troposphere. Although cultures may be very difficult to simulate, characterization of more IN active cells extracted from cloud and rain water is also needed.

There have also been studies using ice-nucleating bacteria commercially. In some uses, bacterial ice nucleation at higher temperatures may be useful in keeping foods frozen. For example, nucleation temperatures of salmon muscle with the use of ice-nucleation active (INA) Pseudomonas syringae was raised from -4.9 to -1.5oC [21]. This means that the difference between the freezing-point temperature and the nucleation temperature of the sample was reduced by 3.4oC (Figure 4). With the ability of freezing food at warmer temperatures, businesses could save on various expenses and could prevent spoilage. Li et al. (1997) tests freezing effects in multiple foods in response to concentrations of bacterial ice nucleators [23]. The addition of P. syringae cells to egg white solutions resulted in a significant increase in nucleation temperatures at -6oC (Table 1). In solution containing 9% egg white solution freezing occurred at -5.1oC without INA bacteria, but was raised to -0.6oC in the presence of INA Pseudomonas syringae cells. At 20% egg white solution the control did not freeze when exposed to -6oC temperatures, but the INA samples froze easily. This means that the behavior of the egg white solution was determined by the presence or absence of INA bacteria. It may be impractical to supplement large quantities of bacteria into everyday foods, but their effects on the freezing model of food systems may provide information for future studies of microbes in the food industry. 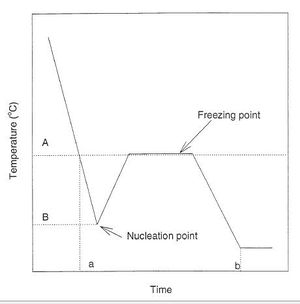 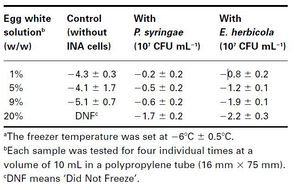 Although most go unnoticed, the presence of ice-nucleating bacteria is important for everyday life from agriculture to making snow. In particular, Pseudomonas syringae have been an epiphyte of great interest for nearly three decades. Its ice nucleating proteins protruding from the membrane are important to structural properties of molecule organization. The process of nucleation can be catalyzed by these specific IN proteins, or inhibited by a mutation in these proteins. The addition of ice-nucleating bacteria to agriculture has potential benefits of protecting crops from frosts dropping below freezing, which might contribute to a solution of the world-wide problem of starvation and chronic hunger. These bacterial mechanisms might also someday be used to keep food frozen leading to conservation of energy or other benefits. The role of INA bacteria is also predicted to influence cloud formation. Future studies could uncover even more answers for most people who don’t realize how dependent they really are on these bacteria.