A Viral Biorealm page on the genus Circovirus 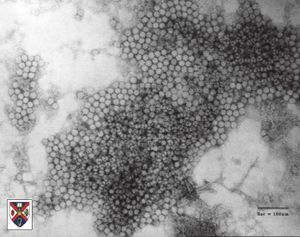 Porcine Circovirus. From ICTVdB Descriptions Courtesy Prof Stewart McNulty. Copyright notice: This notice must accompany any copy of the images. The images must not be used for commercial purpose without the consent of the copyright owners. The images are not in the public domain. The images can be freely used for educational purposes.

Circoviruses are the smallest pathogenic DNA viruses that have been identified and characterized in animals.

The genome of the circovirus is monomeric. It is unsegmented and contains a single molecule of circular, ambisense, single-stranded DNA that forms a covalently closed circle. The complete genome is remarkably small, often containing just two major genes: rep (encoding the replicase protein) and cap (encoding the capsid protein). The rep genes may however generate variant products. The genome is typically 1800-2000 nucleotides long and the genome has a guanine+cytosine content of 48.4- 53.1 %. (source: ICTV dB Descriptions) For an example of genetic study of circoviruses, see Hughes and Piontkivska, 2009.

Virion Structure of a Circovirus

The virions of a circovirus consist of a capsid with no envelope. Virions have an extracellular phase during their life cycle. The virions are not tailed. The capsid is round and exhibits icosahedral symmetry (T=13). It is isometric and has a diameter of 17-22 nm, although the size of particle diameter varies with the type of stain used. The capsids appear round and the capsid surface structure reveals a regular pattern with distinctive features. The capsid consists of 32 capsomers. The capsomers are hollow morphological subunits. (source: ICTV dB Descriptions)

Reproduction Cycle of a Circovirus in a Host Cell

In case of the Porcine circovirus type 1 (PCV1), the rep gene directs the synthesis of two proteins. The full length protein Rep is 312 amino acids in size, the spliced variant Rep' is truncated and exon 2 is frame-shifted. The replication on PCV1 DNA depends on the synthesis of both proteins. Rep and Rep' bind in vitro to double-stranded DNA fragments comprising part of the origin of replication of PCV1, but the minimal binding sites of the two proteins are distinct. Rep protein represses the promoter of the rep gene by binding to the two inner hexamers H1 and H2. Although Rep' bind to the same sequence, it does not influence Prep. The ratio of the two transcripts varies later on, although similar amounts of rep and rep' are detected by real time PCR immediately after PCV1 infection. Both proteins are co-localised in the nucleus and the formation of homo- and heteromeric complexes is also possible.