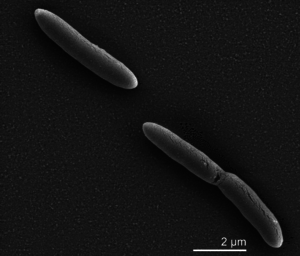 Most Desulfotmaclum stain negative, but under electron microscope are gram-positive due to a lipid layer. All species are obligate anaerobes and can be either bacillus or vibrio. Approximate size ranges from ~0.5 X 1-6 micrometers, and grow optimally in basic pH. Population growth is generally slower than aerobic bacteria because sulfur is the limiting reagent and bacteria must be in contact with it. Some species are slight thermophilic, at 53C, or mesophilic, at 37C. Their DNA G-C contents do not appear to correlate to optimal temperature conditions, some of the species were able to live at moderate thermophilic conditions with a G-C content of 43%. Cell membrane composition and chaperone proteins likely account for high temperature survivability. Almost all species are motile using peritrichous flagella.