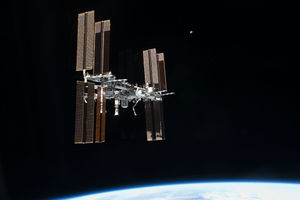 Long-term space station missions to date include Salyut, Almaz, Skylab, Mir, ISS (International Space Station), and Tiangong, with the latter two still ongoing. Researches on the microbial communities which persist during these missions have demonstrated that space stations support a diverse microbial community. While most microbes are not harmful, routine microbial monitoring onboard space stations is still essential in preventing material biodeterioration[2] and maintaining crew health[3]. As currently identified, these microorganisms originate from Earth, with the main source being from crewmembers themselves and from materials manufactured on ground.[4] Environmental monitoring is important in identifying these microorganisms and providing data for future studies in attempt to minimize microbial threat to crewmembers’ performance and spacecrafts’ durability. 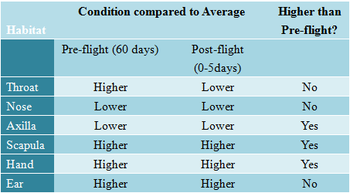 Microorganisms exist in the portable water, ventilating air, and on surfaces of space stations.[4] While these microorganisms share the same living space as the crewmembers, the crewmembers themselves also serve as incubators for various microbes.[5] Researchers have identified several strains of bacteria and fungi as opportunistic pathogen that may pose threats to crewmember. (refer to Key Microorganisms section) Moreover, they have also identified the type of microbes responsible for biodegradation of structural materials.[6] (refer to Biodegradation section)

Other than in portable water and air, bacteria and fungi typically co-exist in biofilms on surfaces, including water pipe lines.[7] Biofilms provides suitable growth conditions, and intrinsically contribute to antibiotic and biocide resistance[13] due to horizontal gene transfer of antibiotic resistance plasmid, and the fact that microbes positioned inside biofilms are harder to reach. One study shows that as much as 36 species of fungi and 58 species of bacteria can co-exist in a single biofilm.[16] However, the composition varies drastically due to dynamic (changing) environmental conditions, available nutrient (surface materials), and also the thickness of biofilm.[16] In addition, exchange of microflora carried by crewmembers travelling to and from the space craft also increases microbial diversity onboard space stations.[12]

Biodegradation of the surfaces of spacecraft structural materials are results of colonization of bacteria and fungi.[2] While fungi are more abundant in early colonization and biofilm formation on polymeric materials, given sufficient humidity, subsequent microbes thrive in biofilms that forms at wide ranges of temperatures.[2] Biodegradation of bacteria and fungi predominantly occur on these surfaces due to the availability of carbon in surface finishings, as well as other nutrients present in structural materials[2] (polymeric-base and metal-based). In thin biofilms, oxic condition support aerobic biodegraders; in thicker biofilms, where oxygen diffusion is limited, anaerobic fermenters and metal reducers are come into play. Although these biodegradation of carbon (polymeric)-based and metal-based materials are due to similar hydrolysis reactions, the yielding products and degree of degradation are different depending on different microbes.[2]

According to various in vitro studies, the microgravitaional environment in space enhances microbial growth.[1][12] Several factors were examined in a closed, isolated environment on ground-based labs, and the results show a decreased lag phase and increased final yield compared to normal-gravity conditions.[12] This enhanced microbial growth also contribute to increase of antibiotic resistance.[1][12] In addition to the confined, microgravitaional condition, various unknown factors onboard also provide distinctive selective pressures that favor certain microbes that eventually become harder to eliminate.[12] 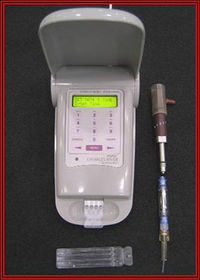 Most antimicrobial and environmental monitoring implementations on ISS are results of studies done by previous expedition, Mir and Skylab. Before December 2006, isolation of microorganisms depended on the growth of environmental isolates on agar media onboard space stations and the subsequent ground-based analysis back on Earth.[11] However, this method restricts the number identifiable microorganisms since more than 95% of environmental microbes do not grow on conventional agar growth media. Furthermore, accuracy is limited since months often passed before returning to Earth for further analysis.[11]

All are opportunistic human pathogens.

The following antimicrobial methods focus on minimizing microbial colonization of the circulating air, portable water, and inside surfaces, as well as preventing the spread of antibiotic resistance. Data collected on ISS show that these methods were successful in reducing the microbial threat to crewmembers and the spacecraft.[9]

HEPA and onboard contamination controls effectively minimize contaminants and organic compounds in air.[9] This reduces the chance of microbial colonization by minimizing possible nutrient sources.

Iodide biocide is used to treat water sources on Earth before they were pumped onto space stations.[15]

The use of biocide, diiodomethyl-p-tolyl-sulfone, on surface finishings was proven effective in reducing microbial colonization.[13] However, current studies suggest that the best way to prevent microbial colonization on surfaces is to select for materials that inhibit biofilm formation and are less susceptible to potential microbial biodegraders.[2] Unfortunately, studies suggest that the material widely used in constructing spacecrafts, Fiber-reinforced polymeric composite materials (FRPCMs), is a potential site of microbe colonization due to its carbon content, is not resistant to biofilm formation, and is especially susceptible to fungal biodegradation.

The core module of International Space Station was launched in 1998 with contributions from the United States, European Space Agency, Japan, Russia, and Canada.[8] One of the ongoing goals of the ISS expeditions is to research on methods of environmental microbial monitoring and controlling.[9]

The first Chinese space station, TianGong-1 (TG-1) was launched in September 2011.[10] Two more space stations in this series, TG-2 and TG-3, are expected to be launched in subsequent years to researching on technologies required for long-term space missions.[10] TianGong is projected to be upgraded to a large scale space station by 2020.[10]