Difference between revisions of "Pond water"

A pond is a body of freshwater smaller than a lake. Ponds are naturally formed by a depression in the ground filling and retaining water. Streams or spring water is usually fed into these bodies. They cn also be man-made ponds which can be created by damming a stream, digging a hole. Ponds are usually land locked and have no outflow. Because of this, they are considered to be self-contained ecosystems. These ecosystems are often teeming with rich vegetation and a diverse organismal life. 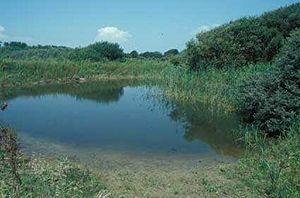 Ponds can be very different from one another depending on their location and climates. Temperatures can vary from moderately warm in the summer to completely freezing over in the winter. Usually ponds have a pH of approximately 7 but can be as low as 6 and as high as 10 depending on many factors. Large populations of algae and other aquatic plants can change a pond's pH depending on the time of day. These organisms take up more dissolved carbon dioxide through photosynthesis during the day and emit carbon dioxide during the night though respiration. Higher amounts of carbon dioxide help maintain pH at around 7 by dissociating into bicarbonate ions. With a large organic demand for carbon dioxide, the bicarbonate ion concentration and thus buffering capacity of the pond can be significantly reduced and the risk of a rapid pH change increased.

Composition of water may be murky if it has a high amount of suspended particles and/or organisms. The bottom of a pond is usually sediment of sand, decaying matter and microorganisms. Pond water is usually stagnant. Nutrients are brought to the pond by the streams that feed into it, run off during rain, or by the snowmelt off of the surrounding terrain. This washes in soil, animal waste, and decaying plant matter into the pond where they are broken down and used to fuel the ponds ecosystem. Many animals that live in the surrounding area, migrating birds, and near by plants depend on these ponds for a rich source of nutrients and water.

Ponds have a wide variety of microbial life. According to a study in 2000, ponds have an average of 184.5 different types of microbes. Different levels of dissolved oxygen and light are present at different depths in the pond. This leads distinctly different niches from green algae and cyanobacteria on the surface to sulfate reducers and methanogens on the bottom.

These pearl shaped cyanobacteria are photoautotrophs. They can are able to synthesize their own sugars using carbon dioxide in the air and sunlight. They have been found to form symbiotic relationships with plants such as on the underside of Azolla ferns and other microorganisms. This bacterium is extremely valuable to the ponds ecosystem because of its rare nitrogen fixing ability. All organisms need a source of nitrogen to survive but very few can make their own from nitrogen gas in the air due to it's chemical structure. Anabanea can take dinitrogen and convert it in to ammonia, which then can be used as a nitrogen source by other organisms. For this reason, they are often used in rice paddies to help fertilize the plants.

This spiral shaped anoxygenic photosynthetic bacteria can live both in aerobic and anaerobic conditions. When in the presence of oxygen, Rhodospirillum can suppress photosynthesis and becomes colorless. When in anaerobic conditions, it can become photosynthesis active by producing bateriocholorphylls and carotenoids proteins in its membrane. Bacteriocholorphylls contains cholorphyll b, not cholorhyll a like in plants. This allows Rhodospirillum to abosrob light with longer wavelengths. Carotenoids help the bacteria gather light energy for photosynthesis and give this bacterium a purple red color when in sunlight.

This dark green bacteria lives strictly under the surface of the pond where no oxygen is present. Chlorobium is a spherical photolithotroph. This means it gets energy from the light and inorganic substance for biosynthesis. For this bacterium, the inorganic substance is hydrogen sulfide, which is used as an electron source. 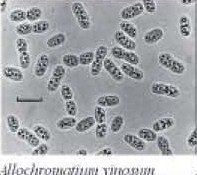 Sulfate is produced as a waste product that then can be used by other organisms in the pond.

These are both examples of sulfate reducers found in ponds. These microbes thrive in the decaying sediment at the bottom of the pond. They are anaerobic bacteria because they use sulfate as its electron acceptor instead of oxygen. They are known for their bioremediation value because they can break down toxic pollutants and corrode metals by reducing them.

This is an extremely large and diverse group of organisms that include more than just bacteria but archea as well. These organisms produce methane, which is also known as swamp gas or natural gas, in anoxic conditions. These autotrophs are also found at the bottom of ponds where other reduction targets have be depleted (oxygen, nitrate, sulfate, etc.) Methanogens are important to the ponds ecosystems because they remove excess hydrogen and make use of fermentation products that have been formed by other forms of anaerobic respiration.

This is another large group of bacteria. These negative gram cells are mostly anaerobic and heterotrophic and contribute a lot to decomposition of waste suspended in the water and deposited in the sedimentary floor. Proteobacteria flourish in eutrophic ponds and include phototrophs, pathogens, and fecal bacterial indicators of contaminated water. They can be found suspended in all layers of the pond. Fecal indicator bacteria are bacteria used to assess the quality of a water source. They are not necessarily disease causing but do have a high correlation with the presence of water-born disease causing organisms, such as bacteria, protozoa, amoebas, and other microbes. High concentrations above a specific limit would indicate that a body of water is unsafe for contact and consumption due to waste water contamination.

These include most of the phototrophs. Some form symbiotic relationships with plants (eg. Rhodospirillum (see above). Others are pathogenic and release toxins that are harmful to other pond organisms and animals if ingested.

These include many wastewater bacteria important for the break down of sewage and other chemicals. They also play a vital role for plants by fixing nitrogen to ammonium and to nitrite.

They are the groups that are associated with bad water and sickness such as salmonella. E.coli and cholera. Vibro cholera is known for causing diarrhea if ingested and infect open wounds in swimmers. Cholera blooms occur during the summer when temperature and nutrients in the water increases and are known to survive for more than a year in biofilms.

They are specialized in the break down of organic plant matter (chitin and cellulose), these bacteria are great contributors to the organic turn-over in the carbon cycle.

What Else Lives There Besides Microbes?

There are many other organisms besides bacteria that share the pond water. Many are every day organisms that we would find anywhere. Plants such as water lilies, duckweed, grass, and cattail are may be found present in water. There are mollusks, which includes clams, snails, and freshwater mussels. There are also insects such as dragonflies, damselflies, and water scorpions. Worms may also be found in ponds such as flatworms, leeches, and roundworms. It’s not surprising to find many amphibians, reptiles, and fish swimming in the water such as turtles, frogs, toads, salamanders, snakes, sunfish, minnows, bass, and carp in ponds. Finally, many birds and mammals travel around ponds and making contact with the water for feeding and/or shelter purposes. They include herons, mallard ducks, muskrats, and beavers.

How They Interact/Compete/Help Each Other

There are many factors that determine the variety and number of organisms that live in a pond. These factors include oxygen, light, size, shelter, and competition for food and nutrients. The organisms also depend on the way plants and animals live together in the pond. They can either live in the pond, on the pond, right outside of the pond, or near it. Organisms that live in a pond are required to follow the food chain no matter what. Everything that is alive or has been alive will become food for another living organism sometime in their lives. This means that a smaller organism (plant or animal) is eaten by the next larger organism, and that organism is then eaten by the next larger organism, and so on. This normally continues until the largest organism in the pond dies and becomes food for the smallest. Then the food chain starts all over again.

How They Interact with the Environment

The environment surrounding a pond has many affects towards it. Factors such as sunlight, changing of seasons, and snowmelt play a huge role in a pond in which they are all able to affect a pond’s ability to decrease E.Coli count. For example, sunlight decreases E.Coli count by its UV radiation. The UV radiation can cause degradation some of the bacteria that are floating towards the surface of the water. Another example is snowmelt, which also decreases E.Coli count when it dissolves into the pond water.

Do the Microbes Carry Out Any Metabolism That Affects Their Environment?

All of Earth's living organisms need nitrogen to survive. About 78% of the Earth's atmosphere is nitrogen gas. Nitrogen in this state is unusable to all but a small number of organisms. Nitrogen fixing bacteria and blue green algae that live in ponds and soil are responsible for changing nitrogen gas in to ammonia, which is compound plants are able to use. Some plants (legumes and ferns with anabaena) have formed a symbiotic relationship with these organisms. Next, nitrifying bacteria further change ammonia from nitrogen fixing bacteria and decaying organic matter in to nitrites and nitrates, which are also taken up by plants and then animals. Nitrogen is returned to the atmosphere as gas from nitrates by denitrifying bacteria. 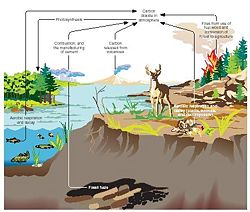 Carbon is an element in the world that is recycled over and over again. Carbon in the atmosphere is in the form of carbon dioxide. This gas is turned in to a usable form by pond plants, algae, photoautotrophic bacteria, and other primary producers. Carbon is then passed from to organism to another during predation. Carbon is turned back into carbon dioxide by respiration and decomposition of organic organisms into the water and atmosphere. 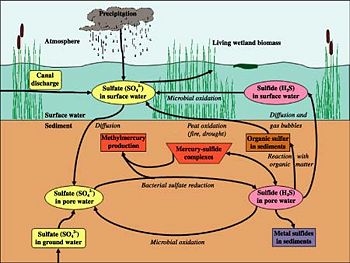 Sulfur is another important element to life. It is a major component in proteins and vitamins in plants and animals. Sulfur deposits are found in the sediment of lakes and ponds from decomposing organisms and tied up rocks, salts, and metals. Sulfate reducers at the bottom of the pond break down these sources of sulfur so other organisms can use them again. Sulfide on the bottom of ponds and in surface water is turned oxidized by bacteria in to sulfate which then can be used by other animals and returned to the biomass circulation.

Ponds can be used for waste management. Purple non-sulfur bacteria (PnSB) are being used experimentally with infrared light for the breakdown of organic matter. PnSBs use hydrogen acts as a reducing agent for photosynthetic processes. Infrared suppresses algae growth so that more bacteria can be produced. With no oxygen, more PnSBs can be made and less sulfate reducing bacteria is produced.

According to Zoonoses and Public Health, an experiment was conducted in the local tilapia fish to determine the microbial quality of pond water, prevalence of bacterial pathogens and their anti-microbial resistance. It turned out that 75 healthy fish and 15 pond water samples commercial tilapia fish farms in the country were processed. After recovering 202 bacterial isolates from fish slurry and 88 from the water, it was concluded, “The predominant bacteria from fish slurry were Pseudomonas spp. (60.0%), Aeromonas spp. (44.0%), Plesiomonas (41.3%) and Chromobacterium (36.0%) (P < 0.05; χ2) compared with isolates from pond water where Bacillus spp. (80.0%), Staphylococcus spp., Alcaligenes spp. and Aeromonas spp. (60.0%) were most prevalent” (Pages 206 – 213).