The archaeon Methanosaeta harundinacea 6Ac is part of a family of aceticlastic methanogens who exclusively catabolize acetate (Ferry 2008). It is rod-shaped, non-motile, and usually found singly or in pairs, but when grown in acetate with high cell density, the cells form into filaments which are self-contained (Ma et. al 2006), products of quorum sensing.

Quorum sensing is a cell density-dependent process of gene regulation by which unicellular organisms can communicate with others of the same species and co-ordinate their behaviours (Miller and Bassler 2001). Signal molecules called autoinducers are constitutively expressed and secreted out of the cell, which then get taken up by members of the other species present in the area. As such, autoinducer concentration in the immediate environment increases as cell density increases and given that enough autoinducers are uptaken, a threshold concentration is reached inside the cells which triggers a change in gene expression. The cells can then co-ordinate a number of processes together, such as biofilm formation, sporulation (Miller and Bassler 2001, production of virulence factors such as in Pseudomonas aeruginosa (Pesci et al. 1997) , or in the case of Vibrio fischeri, bioluminescence (Hastings and Greenberg 1999). In Gram-positive bacteria, oligopeptides serve as autoinducers, and Gram-negative bacteria use acyl homoserine lactones (AHLs) (Miller and Bassler 2001). 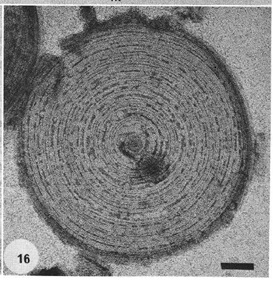 Negatively stained EM micrograph depicting a spacer plug which has been separated from the filament. The plug is firmly attached to the sheath, and is composed of numerous concentric rings (Beveridge et al. 1986).

When the cell density is low, M. harundinacea 6Ac exist as short, singular rod-shaped cells (Ma et al. 2006), but when the cell density is high the archaeon’s physiology drastically changes. Chains of cells are stacked end to end forming filaments that can be greater than 200 microns, in contrast to a length of 3-5 microns as single cells (Guo et al. 2009). Beveridge et al. (1986) found that the filaments consist of four major parts: the cells lined up in a chain, spacer plugs which separated each individual cell as well as plugging the two ends of the filament, an amorphous granular matrix, and encasing everything a proteinaceous sheath. The spacer plugs are anchored to the sheath, and appear to have multiple layers. The granular matrix is enclosed by the sheath and the plugs and completely encloses individual cells. The protein sheath is striated and composed of a highly crystalline structure. This lends it tremendous strength against pressure, as well as other physical and chemical disruption (Beveridge et al. 1986). As such, when M. harundinacea 6Ac form into filaments, they can better withstand unfavourable environment conditions and thus have an edge over other micro-organisms in the area. Note that Beveridge et al. (1986) described filaments formed by Methanothrix concilii, which have been renamed to Methanosaeta concilii as elucidated by Patel and Sprott (1990). Given that there is a 92.5% similarity between M. concilii and M. harundinacea 6Ac based on 16S rRNA sequences (Ma et al. 2006), the filament descriptions are likely accurate for M. harundinacea 6Ac as well.

A segment of the filament (3 individual cells) formed by M. harundinacea. The four major components of the filaments, the outer protein sheath, the spacer plugs, granular matrix, and the individual archaea are shown (Beveridge et al. 1986).

The metabolic patterns between the 2 distinct morphologies are significantly different. Both methane production and the reaction rate of methanogenesis are higher in the filamentous cells than in the short rods (Zhang et al. 2012). It was also shown by Zhang et al. (2012) that the filamentous cells produce lower levels of cellular proteins compared to the short cells, and had less biomass. The significance of this is that M. harundinacea 6Ac can better compete with other micro-organisms for resources in the environment, such as for acetate with acetoclastic microbes, and as well they can divide quicker due to faster metabolism and the lower biomass required, and outgrow any competitors.

There are quite a few similarities between the quorum sensing mechanism of M. harundinacea 6Ac and that of bacteria. The filI-filR system is a homolog of a universal quorum sensing system in bacteria, the luxI-luxR system, which essentially works the same way. The luxI gene encodes a protein which synthesizes the autoinducer, and the autoinducer is bound by the sensor protein encoded by luxR, and the LuxR-autoinducer complex facilitates the changes in gene expression (Miller and Bassler 2001). FilI synthesizes the autoinducer carboxyl-AHL, which as mentioned above is only one carboxyl moiety away from being an AHL, which is the autoinducer utilized by Gram-negative bacteria. This suggests that possible horizontal gene transfer, the flow of genetic information between prokaryotes of different species (Syvanen M. 2012), might have occurred between bacterial species and the archaeon. In addition, several other Methanosaeta spp.(such as Methanosaeta thermophila, and other methanogenic archaea (such as Methanosarcina mazei have been found to respond to carboxyl-AHLs and undergo morphological changes in a cell density-dependent manner (Zhang et al. 2012), and so AHL-based quorum sensing may be a universal mechanism in prokaroytes.

Quorum sensing is a demonstrated process in the archaeon M. harundinacea 6Ac, via the usage of carboxyl-AHLs and the FilR protein, and the changes in gene expression result in the formation of filaments composed of 4 major parts, the cells, spacer plugs, extracellular matrix, and a sheath. As well the filamentous cells have a higher and faster methane output rate, and have decreased protein production, and as a result a lower biomass. These changes enable the archaea to work together as a group and give them an edge over other microbes in the environment, namely being more resistant to unfavourable environment conditions, and being able replicate faster.

Hastings J.W. and Greenberg E.P. “Quorum Sensing: the Explanation of a Curious Phenomenon Reveals a Common Characteristic of Bacteria”. Journal of Bacteriology, 1999, 181(9):2667-2668