Difference between revisions of "Quorum sensing in vibrio cholerae"

Overview: Cholera is a severe diarrheal disease with ancient origins, with Sanskrit accounts of the disease from the Indian subcontinent dating to the fifth century B.C. ((1). In the early 1850s, the British physician John Snow was the first to suggest that cholera was a communicable disease that was spread through a drinking supply contaminated with infected stools. The bacterium responsible for cholera was isolated in pure culture by Robert Koch in 1850. Today it is estimated to infect three to five million people annually, with cases being hugely underreported. Although it has largely been eradicated from industrialized nations, cases worldwide have continued to grow since 2005 (CDC)(2). Cholera is endemic in 50 nations around the world (1). Outbreaks most commonly occur in Africa, Southeast Asia, and Haiti (CDC). Floods and other natural disasters often contribute to these outbreaks.

Vector: The pathogenic agent of cholera is Vibrio cholerae, a Gram-negative, curved-rod shaped bacterium. There are many serogroups in this species; however, only two, 01 and 0139, are pathogenic (Harris). Vibrio cholerae is able to alternate between living in the environment and within a host. In the environment, the bacterium is found in marine ecosystems and estuaries. V. cholerae is often found living symbiotically with zooplankton and shellfish, using the chitin found in their exoskeletons as a carbon and nitrogen source.

Transmission and Infectivity: Cholera is most commonly spread by water supplies contaminated with stools infected with Vibrio cholerae. It can be difficult to detect the presence of V. cholerae in water sources, due to the bacterium’s ability to aggregate in biofilms of conditionally viable environmental cells (CVECs) (3). The formation of these biofilms is postulated to be evolutionarily beneficial because it could help Vibrio cholerae persist in the environment as well as minimize the energetic cost of osmotic stress. CVECs are challenging to culture using standard techniques. However, CVECs have an extremely high potential of infectivity. While in the environment, they are in a partially dormant state but can reactivate upon entering a host. The biofilm can then disperse, leading to a burst of infectivity.

Pathogenesis: The infectious dose of V. cholerae is between 105 and 108 for humans (1). Most of these infecting microbes are killed by stomach acid. However, those that survive travel to the small intestine where they begin to produce cholera toxin (CT), which is the main virulence factor of V. cholerae. The B subunit of CT binds to the outside of the host cells, allowing the A subunit to enter the cell. Once inside, it activated adenyl cyclase, causing the concentration of cyclic-AMP to increase. These heightened cAMP levels cause the diarrhea that is characteristic of cholera. Regulated in parallel to CT are pilus genes, which allow effective colonization of the digestive tract.

Prevention and Treatment: Prevention is contingent on the availability of clean water and the development of sanitation facilities (4). Health education about proper food hygiene is also important in reducing the transmission of the disease. Mass treatment of communities with antibiotics has been shown to have no benefit, and can actually be detrimental as it can lead to antibiotic resistance. There are two types of vaccines available for Vibrio cholerae, a parenteral vaccine and an oral vaccine. The WHO does not encourage use of the parenteral vaccine, due to high potential of deleterious side effects and relatively low efficacy. The oral vaccine is available for individuals travelling to countries where cholera is endemic, and has recently started to be used during outbreaks of the disease. Left untreated, cholera can have a fatality rate of over fifty percent (1). However, effective therapy, which involves aggressive fluid and electrolyte replacement, can lower this mortality rate to less than one percent. 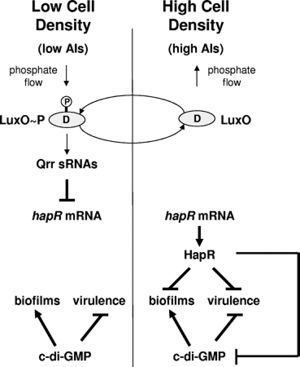 Regulation of biofilm formation in Vibrio cholerae at high and low cell densities, from http://jb.asm.org/content/190/7/2527.full

Quorum sensing is a type of bacterial communication that occurs via the secretion of autoinducer molecules (5). Bacteria can detect the presence of autoinducers produced by members of the same species. At a critical level of environmental autoinducers, gene expression in the members of the colony changes and the behavior of the colony as a whole is altered. Vibrio cholerae must contend with two distinct environmental conditions: free-floating in the environment and attachment to a host (6). Consequently, the bacterium must be able to effectively transition between these two phases through differential gene expression patterns. This transition is facilitated through both quorum sensing and a second regulatory system, 3′,5′-cyclic diguanylic acid (c-di-GMP) signaling. Quorum sensing in V. cholerae is governed by parallel phosphorylation cascades. The first system uses the autoinducer AI-2, a furanosyl borate diester, whose presence in the cell is detected by LuxPQ (7). AI-2 is found in many other families of bacteria besides Vibrio (8). The autoinducer used in the second system is cholera autoinducer-1 (CAI-1), a hydroxylated alkyl ketone, which is detected by CqsS (5). Unlike AI-2, CAI-1 is unique to the Vibrio family (8). At low concentrations of autoinducers, indicating low cell density, A1 molecules act as kinases, transferring phosphate groups to the response regulator LuxO. The phosphorylated version of LuxO, in conjunction with a second protein, LuxP, activates the genes encoding Qrr small regulatory mRNA molecules (9). These regulatory mRNA molecules destabilize the mRNA encoding a major quorum sensing transcription factor, HapR. This destabilization results in downregulation of quorum sensing, so that the low-cell density phenotype of biofilm formation can be expressed. It also results in the upregulation of the extracellular proteases HapA and PrtV (10). When the concentration of autoinducers increases, these molecules bind their cognate receptors, resulting in a conformational change that confers phosphatase activity. The receptors then begin to remove the phosphate groups from LuxO (5). As a result, the production of the small regulatory mRNAs is lessened, and the HapR mRNA is stabilized and can be translated to protein. The expression of HapR signals to the bacteria that it is in a high-cell density environment, and results in downregulation of both biofilm and virulence genes, which aids in the dispersal of the bacteria. The biofilm phenotype is activated by the regulator c-di-GMP, a second-messenger molecule that switches the cell from a motile to a sessile state (5). High levels of c-di-GMP promote biofilm formation and repress virulence and motility (6). The molecule is generated when two GTP molecules cyclize with the loss of two phosphate groups, a process carried out by proteins with GGDEF motifs such as QrgB. HapR has an effect on this cycle because it represses the expression of GGDEF proteins. Thus, when cell density HapR concentrations are low, more c-di-GMP is produced. The molecule c-di-GMP acts by inducing the biofilm activator vpsT. HapR exerts a second type of control on biofilms formation by binding to vpsT, inhibiting the expression of biofilm genes. A second type of regulation that affects c-di-GMP levels is the protein VieA, controlled by the promoter V1086, which contains an EAL domain that acts as a c-di-GMP phosphodiesterase, thereby degrading the molecule and reducing its overall cellular concentration. As a result, exopolysaccharide genes, which are important in the formation of biofilms, are repressed (11). The role of c-di-GMP was demonstrated in experiments where abnormally high concentrations of the molecule were expressed at high cell density. In this high-density system, the biofilm phenotype characteristic of low cell density was observed.

Competence, which is the ability of a microbe to take up DNA from the external environment, is a process that occurs in V. cholerae. The DNA absorbed can then undergo transformation into the genome through recombination. Being naturally competent allows the possibility of horizontal gene transfer (HGT). The presence of large genomic islands in the genome of V. cholerae indicates that HGT has occurred throughout its evolutionary history (8). Transformation could allow for the acquisition of virulence genes by nonpathogenic strains of V. cholerae. Chitin, found in the exoskeletons on which V. cholerae live symbiotically, is required for the induction of competence and subsequent transformation in V. cholerae (12). The detection of chitin and subsequent alteration of gene expression to allow for competence and transformation is regulated by the protein TFox. However, other factors, such as high concentrations of cyclic-AMP in the cell, are required for transformation to occur. Quorum sensing also has an effect on whether DNA uptake will occur. Both of the autoinducers that V. cholerae produces contribute to the expression of comEA. However, CAI-1 is more important for this process, with AI-2 playing a less significant role (8). The quorum sensing transcription factor HapR is also required for transformation (12). While quorum sensing does not regulate all of the genes involved in transformation, it does regulate two: comEA and comEC. ComEA encodes a DNA-binding protein located in the perisplasm that activates competence-involved genes. ComEC is directly involved in taking up DNA from the external environment. Quorum sensing also acts to regulate the nuclease dns (12). Under conditions of low cell density, low concentrations of HapR are present and dns is transcribed and translated to protein. This protein is excreted from the cell and acts to degrade free-floating DNA in the environment. Thus, there is not DNA available to recombine into the genome of V. cholerae. The reverse process occurs at high cell density when high concentrations of HapR are present. Less of the nuclease is produced, and as a result, there is a possibility for surrounding DNA to be taken up. The induction of competence does not happen equally to all V. cholerae cells in a population (12). This disparity is postulated to exist due to unequal distribution of autoinducers in the environment, as well as unequal distribution of the chitin derivatives required to induce competence genes. 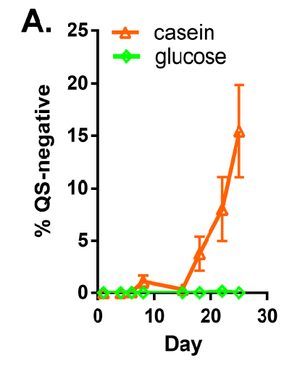 When V. cholerae are grown on casein protein, the prevalence of QS-deficiency increases, while this increase is not observed when glucose is the nutrient source. Retrieved from http://aem.asm.org/content/early/2015/03/23/AEM.00586-15.abstract 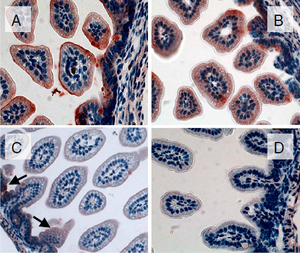 Presence of cholera toxin (red color) in infant mouse intestines. Prior to infection with V. cholerae, mice were treated with A) nothing, B) E coli Nissle or C) E coli transformed to express V. cholerae cqsA. which encodes the enzyme CAI-1. Group D) had no pretreatment or infection. Retrieved from http://www.ncbi.nlm.nih.gov/pmc/articles/PMC2895089/