The Thermophiles of Kamchatka

The Kamchatka peninsula is located in far-east Russia. It is 1,250 kilometers long and is known for great variation in temperature, which ranges in proximity to volcanoes, hot springs, and elevation. Along the border of the Kamchatka River, there are around 160 volcanoes and various hot springs. These hot springs have temperatures ranging from 40ºC to 100ºC and support the growth of microorganisms capable of tolerating high temperatures (thermophiles). Some environments of Kamchatka can also be extremely acidic. An example of the extreme conditions encountered in Kamchatka: hydrothermal pools in the Uzon Caldera. These pools can have temperatures as high as 95ºC and extremely acidic environments, pH = 1 [1]. 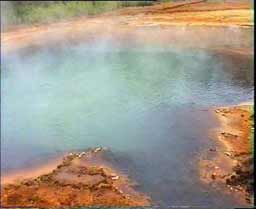 A picture of the Maliye Banniye hot spring located uphill of the Bannaya river. The temperature of the water can reach up to 76ºC. Source: Kamchatka.org

The majority of microorganisms thriving in these extreme environments are anaerobic [1]. These organisms possess a variety of adaptations of the basic chemistry which keep cells functional. For example, the proteins of these thermophiles are stabilized at high temperatures through a large number of charged residues taking part in ion-ion interactions [1]. Also, lipids forming the cell membrane are often linked by ether groups, rather than the common ester groups, and this allows their lipid chains to form a monolayer wall which stabilizes the cell membrane at such high pressures and temperatures [1]. Thus, they are able to maintain cell structure by utilizing this monolayer wall and correctly fold their proteins in conditions which would have detrimental effects on most microorganisms.

Microorganisms of the Zavarzin spring encounter high sulfur and nitrate concentrations and temperatures as high as 60ºC [2]. 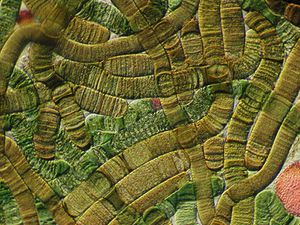 Thermophilic cyanobacteria are found in many springs including the Zavarzin spring. These bacteria tolerate high temperatures and different species can tolerate varying acidities.

The cyanobacterial mats, in neutral springs with temperatures around 60ºC, often consist of 10 to 15 layers of Phormidium laminosum [3]. The organic matter formed by these autotrophic cyanobacteria, through photosynthesis by reduction of CO2, can be used by organotrophs [2]. Organotrophs in the hot springs of Kamchatka include Calditerrivibrio, Thermus, Desulfurella, and Sulfurihydrogenibium [2].

The high nitrate (NO3- ) concentrations in the Zavarzin spring confer strong selective pressure by selecting for microorganisms capable of tolerating and using the nitrate [2]. Calditerrivibrio are anaerobic organotrophs which use the organic compounds made by thermophilic cyanobacteria as energy sources, and nitrate as a terminal electron acceptor (TEA) [2]. The end products of their metabolism are CO2 and ammonium (NH4+) [2]. Thus, they cycle organic compounds back to CO2. 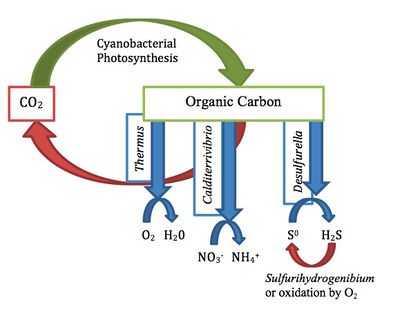 Species of the genera Thermus also completely oxidize the organic compounds to CO2. They may use dissolved O2 or NO3- in the hot spring as TEAs [2].

Their use of organic compounds contributes to the carbon cycle by cycling organic carbon back to CO2 [2]. This may allow further fixation by the cyanobacteria.

Species of the genus Desulfurella are sulfur-respiring thermophilic bacteria commonly found in the hot springs of Kamchatka [4]. These species are Gram-negative obligate anaerobes, which prefer neutral environments [3]. Two such species include D. kamchatkensis and D. propionica. These bacteria reduce elemental sulfur (Sº) in the environment and can use H2, organic acids, and fatty acids as energy sources. They oxidize all organic substrates completely to CO2 and grow optimally at 55ºC [4]. Both species obligately require sulfur-containing electron acceptors for growth [4]. They are often found associated with cyanobacterial mats where there is an abundant supply of elemental sulfur precipitated between the layers of the cyanobacteria [4].

Their respiration plays a role in carbon and sulfur cycle as the end product of respiration is CO2 and often H2S [5].CO2 can be used by autotrophs for fixation. H2S, as part of the sulfur cycle, may be oxidized by dissolved oxygen, or by chemolithoautotrophs such as Sulfurihydrogenibium, and converted back to elemental sulfur [2].

Caldicellulosiruptor Species and Other Cellulose Degraders

Cellulose-degrading organisms, including species of the genus Caldicellulosiruptor, have been isolated from the Geyser Valley. These organisms inhabit hot springs with temperatures ranging from 55-65ºC and pH values from 4.5-8.0 [6]. The hot springs are rich in dead plant material, which the organisms use as a source of cellulose [6]. C. kronotskyensis and C. hydrothermalis, two particular species of the genus Caldicellulosiruptor, are strictly anaerobic and Gram positive [6]. They are also non-sporulating and flagellated [6].

Role of Archaea in the Nitrogen Cycle

Nitrification by archaea has been hypothesized to be a key process in the nitrogen cycling in thermophilic environments [7]. Genes encoding a subunit of ammonia monooxygenase, which allow the archaea to use ammonia as an energy source, have been isolated from many hot springs in the Uzon Caldera [8]. Ammonia Monooxygenase (AMO) oxidizes ammonia (NH3) to nitrate (NO3-) [8]. Analysis of 16S rRNA genes has also shown that Crenarchaeota are abundant members of the archaeal community in these hot springs [8]. The hot springs in which the genes were isolated had temperature ranges of 82-97ºC and pH values as low as 2.5 [7]. This shows that archaea may contribute to the nitrogen cycle in extreme environments by providing nitrate to other microorganisms for use as TEAs [7].

Considering the acidic environment, ammonium (NH4+) dominates over ammonia (NH3) [8]. Therefore, it would be useful to understand how these enzymes can carry out this reaction in such extreme temperatures and acidic conditions, and how this impacts the global nitrogen cycle.

Acidification of Hot Springs by species of Acidithiobacillus

Species of the genus Acidithiobacillus, predominantly A. thioparus, have been isolated from hot springs in the Uzon Caldera [9]. These organisms metabolize iron and sulfur compounds and produce acid as a by-product of their metabolism [9]. Their metabolism helps create a niche environment in which the growth of acid-tolerant organisms is favoured [9]. The hot springs which these species inhabit have pH values as low as 2.3 [9]. Thriving in this acidic environment are also cyanobacteria, such as Calothrix thermalis, which form green cyanobacterial mats [9].

These microorganisms also impact macroscopic organisms such as hoverflies. Hoverfly larvae are often found in these acidified hot springs.[9] The larvae use organic compounds made by the assimilation of CO2 by the photosynthetic cyanobacteria as nutrients [9]. They also feed on the microorganisms themselves. The acidic environment prevents larvae from being overtaken by higher order organisms, which cannot tolerate the acidity [9]. Thus, the symbiotic relationship prevents the larvae from completely depleting all of the nutrients and microorganisms because it requires Acidithiobacillus to create a favourable acidic environment [9]. 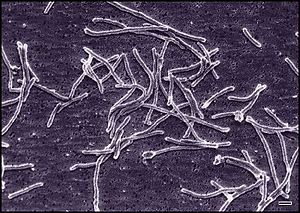 Thermus aquaticus; a rod-shaped bacterium. Taq polymerase is isolated from this microorganism and used in PCR. Source: Wikipedia

Taq polymerase (Taq) is a thermostable DNA polymerase used in the polymerase chain reaction (PCR), which amplifies DNA segments of interest. Temperatures encountered in PCR denature most proteins but Taq is able to withstand the extreme temperature cycles and can retain its activity even at 94ºC [10]. The name “Taq” is a derivation of the name of the organism from which it was originally isolated from: Thermus aquaticus [11]. Thermus aquaticus was originally discovered in Yellowstone National Park [11] and it is also found in Kamchatka. Today, PCR can be used in various different fields. One such field is forensics, where Taq is used to amplify DNA for DNA fingerprinting.

[9] Lobkova, L., Barinsova, E., Dulov, L., and Galchenko, V. “Interactions between Larvae of the Hoverfly Eristalinus sepulchralis and Microorganisms in the Hydrothermal Springs of the Uzon Caldera, Kamchatka.” Microbiology 76.3 (2007): 357-367.