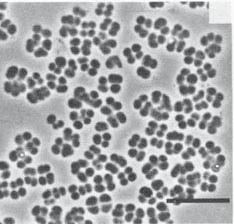 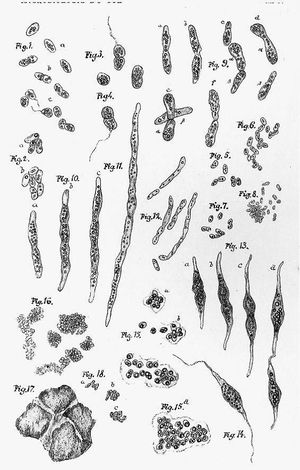 Thiocapsa roseopersicina and other sulfur bacteria as drawn by Winogradsky (9) 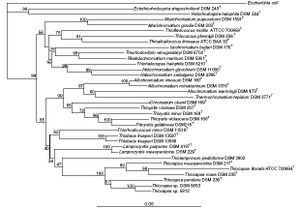 Thiocapsa roseopersicina has optimal growth in a medium with 0.3 M sodium chloride. This is a lower concentration than that of the seawater that T. roseopersicina is found, but that is common for marine/halotolerant organisms to have different optimal conditions than that of the environment they are isolated from. This is a good survival technique as the osmolarity of the marine water fluctuates from various occurrences like rain or evaporation. (5)

The bacterium is mainly characterized as an anoxygenic photosynthetic bacteria but it also has chemolithotropic capabilities that are dependent on the environment. Bacteriochlorophyll a is the main light harvesting pigment. The peak optical absorbance is between 800-930 nanometers which is near infrared range. The rose color of the bacteria is formed by the optical activity of the carotenoids (pigments of chloroplast). Spirilloxanthin is the most abundant carotenoid in Thiocapsa roseopersicina. (2) 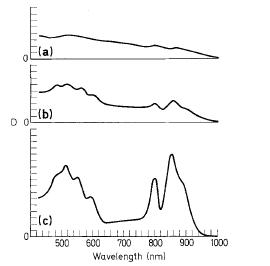 The genome is currently under construction. The genome of Thiocapsa roseopersicina was sequenced in order to help understand the bacterium’s hydrogen metabolism and related metabolic pathways. Shotgun sequencing was done and the results were assembled into 2400 contigs. Currently, the sequencing of 3000 cosmid clones are in progress in order to link the previous contigs into larger contigs as well as fill in gaps between the contigs. Despite the unfinished assembly, many genes were discovered in preliminary results Thiocapsa roseopersicina genome assembly. (8)

One of the initial findings was the Tat gene sequence in the Thiocapsa roseopersicina genome. The Tat pathway is the twin-arginin translocation pathway. It is the pathway of transporting membrane-associated hydrogenases to the periplasmic space. Another discovery from the shotgun genome library is that the Hyn hydrogenase genes have two extra open reading frames. They are named isp1 and isp2 and are located in the middle of the genes that code for the small and large hydrogenase subunit. (8) 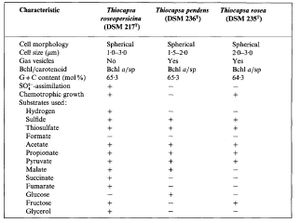 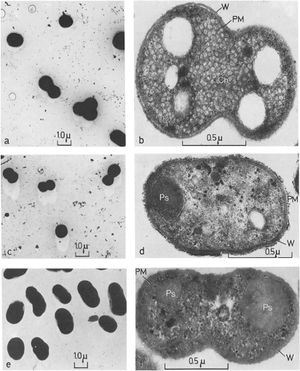 Thiocapsa roseopersicina has spherical cells that can form tetrads. The cells are 1-3µm in size. The cells do not have gas vesicles. The guanine and cytosine content is 65.3%. T. roseopersicina can use hydrogen, sulfide, thiosulfate, acetate, propionate, pyruvate, malate, succinate, fumarate, fructose, or glycerol as substrates. It cannot use formate or glucose as substrates though. (3)

Thiocapsa roseopersicina has two different types of metabolism that it can use based on the environment. Its main metabolism is anaerobic photosynthesis which uses reduced sulfur compounds as electron donors. The secondary metabolism is chemolithotrophy in dark environments, and it uses sulfide or thiosulfate as electron donor and oxygen as the terminal electron acceptor. The discovery of the secondary metabolism of chemolithotrophy was supported by the presence of the active ribulose biphosphate carboxylase enzyme which shows that carbon dioxide is assimilated using the reductive pentose pathway. (1) 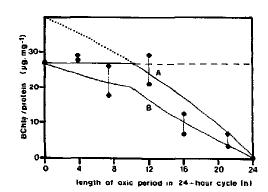 Thiocapsa roseopersicina grows best when it can use both metabolisms simultaneously. This usually occurs in microaerobic conditions of 0-20µM of O2. Photosynthesis is preferred under electron donor limiting conditions, especially when the cells have a lot of pigment like the bacteriochlorophyll a and the carotenoids. When T. roseopersicina is growing under chemolithotropic conditions, it has to compete with colorless sulfur bacteria. (1) Therefore, when T. roseopersicina is using its photosynthetic metabolism, it has a faster growing rate. The bacterium reaches a stationary phase at 3-4 days with the photosynthetic conditions whereas it reaches a stationary phase at 7-12 days with the chemolithotrophic conditions. (6)

Thiocapsa roseopersicina is mainly found in microbial mats in hypersaline and marine environments. Purple sulfur bacteria like T. roseopersicina are limited to a narrow zone vertically that is 1-2 millimeters thick. This area usually fulfills the purple sulfur bacteria’s need for light and sulfide. This area also has opposing gradients of sulfide and oxygen which fluctuates based on the day and night cycle. T. roseopersicina’s interchangeable metabolism is useful for surviving the oscillating conditions. (1)

Thiocapsa roseopersicina has often been found in anaerobic waste stabilization ponds that have a lot of dissolved organic matter. It is often the dominant anoxygenic phototrophic bacterium in microbial mats, which may be in part because of its flexible metabolism. Thiocapsa roseopersicina can form a visible pink to purple patch in the water or on the sediment that it is growing upon. (2)

Thiocapsa roseopersicina is an important bacterium for microbial detoxification. It is one of the few bacteria that can completely oxidize dimethyl sulfide (DMS) to sulfate. The process starts with the presence of dimethylsulfoniopropionate (DMSP) in the environment. T. roseopersicina can cleave DMSP to DMS and acrylate under anoxic, light conditions. DMS and acrylate inhibit microbial growth at high concentrations. DMS in particular also contributes to acid precipitation and has a role in the global sulfur cycle. Under oxic, light conditions, T. roseopersicina can convert DMS to sulfate as well as convert acrylate to propionate. The main drawback is that not all of the DMS is converted to sulfate so there is still a significant amount of DMS in the environment. (5)

T. roseopersicina can also be used to monitor bacteriochlorophyll a-containing cells with optical instruments. The optical characteristics of the bacterium were assessed. These characteristics will be used for developing a technique that will be able to use optical instruments to quantify photosynthetic bacteria. This technique will be especially useful in wastewater treatment plants as it can be used to remotely monitor bacteriochlorophyll a-containing cells either continuously or periodically.(2)

(2) Gitelson, A, R Stark, I Dor, and O Michelson. "Optical Characteristics of the Phototroph Thiocapsa roseopersicina and Implications for Real-Time Monitoring of the Bacteriochlorophyll Concentration." Applied and Environmental Microbiology 65.8 (1999): 3392-97.

(10) Welsh, David T., and Rodney A. Herbert. "Osmoadaptation of Thiocapsa roseopersicina OP-1 in batch and continuous culture: Accumulation of K ÷ and sucrose in response to osmotic stress." DEMS Microbiology Ecology 13 (1993): 151-58.