Entamopathogenic bacteria are [1] pathogens that infect insects. Given that insects and bacteria are some of the most numerous organisms on our plant, their interactions hold significance in many areas. These interactions have a direct effect on humans, as insects are often vectors for transmission of diseases to humans (1). Further, these interactions can have an economic impact (2). Below we will explore some understood methods of pathogenesis by different bacteria and model insects (Figure 1) through the steps of an infection (Table 1) 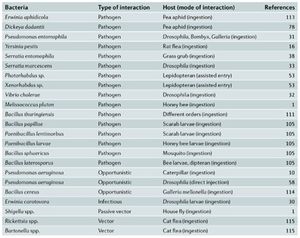 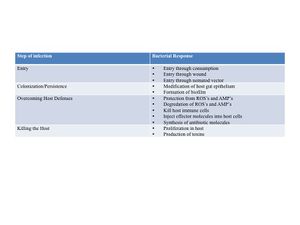 The first task in infecting any host is to gain access into host cells or body cavities. When infecting insects it is gaining access into the [2] haemolymph. This can occur through three main mechanisms: invasion of body cavity via [3] nematode vector, through a wound, and though consumption of contaminated food by the insect (Figure 2) (3). An example of infection by consumption is the infection of fleas by Yersinia pestis, the bacterium responsible for the plague. The gut is infected when the fleas feed on infected rats- another vector for this bacteria. After consumption the bacteria colonize the mid-gut of the flea and cause a blockage between the fore and mid gut. This prevents the flea from pumping blood into the mid gut and leads to starvation causing repetitive flea bits and regurgitation of blood into the bite wound causing infection (4). An example of infection via nematode vector are Photorhabdus luminescence and Xenorhabdus nematodphila who infect insects by first colonizing the nematode gut in a symbiotic manor. The nematode then infects an insect and releases the bacteria allowing colonization. The bacteria then kill the insect providing food for the nematode (5). 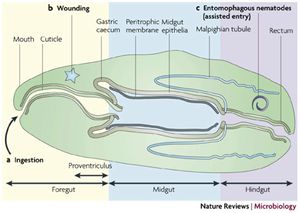 Persistance in the body

After obtaining entry into the body the next step is persisting and colonizing the insect. Three mechanisms of this have been described: secretion of enzymes that counteract insect gut products, [4] biofilm formation, and modifying the host gut (3). An example comes from the bacterium Y. pestis. that uses three key genes in colonization of the flea gut: ymt (Yersinia murine toxin), gmhA and hms (hemin storage) genes. The ymt gene encodes a phospholipase enzyme that prevents bacteria degredation by blood degradation products. GmhA is an enzyme involved in the synthesis of the outer membrane of the bacterium and hms is involved in the extra cellular matrix; both of which are essential for biofilm formation and gut colonization (6,7,8). An example of modifying the host gut is observed in Erwina spp. infecting [5] Drosophila melogaster that encode an evf (Erwinia virulence factor) gene that appears to modify the host gut preventing their eradication (9). Another example of this are the afp (antifeeding prophage) genes encoded in Serratia spp. that have a toxic effect on host gut epithelial cells allowing bacterial colonization(10).

After the bacteria persist in the insect gut they must evade the host immune system. They do this in two ways: avoiding being detected by the immune system or suppressing the immune response (3). A mechanisms used by insects to prevent infection is the production of reactive oxygen species [6] (ROS’s) and anti-microbial peptides [7] (AMP’s). Both of these are produced in response to the presence of peptidoglycan in the insect gut (11). Bacteria produce proteins that either protect them from the effects of these compounds or degrade the compounds3. One example of this is the zinc metalloprotease AprA produced by Pseudomonas entomophilia that acts against host AMP’s (12). A further example is expression of the katN catalase in Salmonella spp. and Escherichia coli that works to counteract the ROS’s produced by the host (13). An example of host immuno-supression is demonstrated by the bacterium X. nematophilia. They have been found to kill host haemocytes: immune cells that are involved in recognition and phagocytosis of foreign cells/compounds14. They repress transcription of genes that code for AMP’s (14). P. luminescens has two methods by which it suppresses the host immune system. The first is a [8] type III secretion system that allows the bacteria to directly inject effectors into host cells, preventing their antimicrobial activities (15) . This bacterium also synthesizes an antibiotic molecule: (E)-1-3-dihydroxy-2-(isopropyl)-5-(2-phenylethylene) benzene that inhibits phenoloxidase: an enzyme involved in melaninization- a method use by the host to kill bacteria (16).

Toxins and Killing the Host

Though many factors involved in bacterial pathogenesis have been described it still remains unclear as to what directly causes insect death. It appears that death is either causes by excessive proliferation of the bacterium or the production of toxic factors that cause damage to the host3. (Figure 3) An example of toxic factors are Cry and Cyt toxins created by Bacillus thuringiensis that create holes in the lining of the gut epithelium of their host (17). Degredative enzymes such as proteases, lipases and haemolysins also have detrimental effects on hosts. Examples of these are metalloproteases produced by Serratia marcescens that inactivate host AMP’S and degrade host tissue (18,19).

Entamopathogens hold ecological, biological and economic significance. Through study we can learn about the largely uncharacterized insect immune systems and the mechanisms that bacteria use to overcome them. This furthers our understanding of insects and how they interact with bacteria in symbiotic and pathogenic manners. From an evolutionary point of view the study of the transmission of virulence factors between bacteria gives us evidence of [9] horizontal gene transfer (20). Thus, furthering our understanding of bacterial evolution and bacterial relationships. Characterizing the interaction between bacteria and insects can provide a model for general host-bacteria interactions. For example, the human disease cholera has been modeled in D. Melogaster (21). Understanding these interactions can further our understanding of insect roles as vectors transmitting human diseases benefiting individual and global health (1,22). Finally, in terms of agricultural development, many insects are detrimental to crop growth and developing methods of [10] biocontrol though bacteria could have importance in optimizing crop yields (23). Though little is understood about the interactions between bacteria and insects its importance is not overlooked. Future research in this area should yield greater understanding of disease transmission, agriculture, and insect pathology.