A Microbial Biorealm page on the genus Lactobacillus delbrueckii 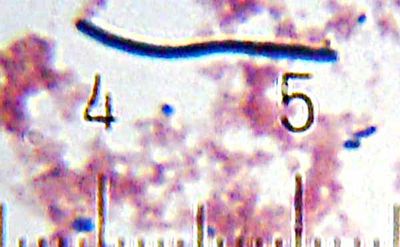 Lactobacillus us delbrueckii is a rod shaped, gram positive, non-motile bacterium. Common to the species is its ability to ferment sugar substrates into lactic acid products under anaerobic conditions. As such, L. delbrueckii are generally found in dairy products such as yogurt, milk, and cheese with the exception of L. delbrueckii subsp. delbruecki which reside in vegetable sources (3). There are four subspecies differentiated by its metabolites and its internal genetics known to date. The most recent accepted subspecies, L. delbrueckii subsp. indicus was isolated from an Indian dairy (1). In contrast, Dr. Stamen Grigorov isolated L. delbrueckii subsp. bulgaricus from a yogurt sample in 1905.


The properties that define L. delbrueckii as a homofermentive lactic acid bacteria (LAB) are not confined by its metabolic end product D-lactate and L-lactate. L. delbrueckii subsp. bulgaricus has been proven to have probiotic affects on humans and animals which include improved lactose tolerance and its ability to stimulate immune responses (4, 5, 7). Past debates against this information questioned the ability of the latter to survive within low acidic environments and the gastric juices of the human gastrointestinal tract. A phosphopolysaccharide produced by L. delbrueckii subsp. bulgaricus has the capability to enhance phagocytosis of macrophages in mice (4).

The circular genome of Lactobacillus delbrueckii subsp. bugaricus ATCC 11842 was completed in May of 2006. Composed of 1,864,998 nucleotides, it has an unusually high G-C content (49%) in comparison to other species of the genus Lactobacilli to which it belongs. Of the 2,217 genes present 1,562 code for proteins and 533 as pseudo genes (10). Genomic features such as these, as well as insertion sequence patterns are indicative of its adaptation in the dairy industry and support the theory of a rapid evolutionary phase (11).


Of the 1,562 genes that code for proteins prtB and the lac operon are important to the homofermentative properties of L. delbrueckii. Within the lac operon is the lacS, lacZ, and lacR genes that encodes for the uptake and breakdown of lactose.(3) The lacS gene codes for lactose permease responsible for the ability to transport lactose in through the membrane. The important enzyme B-galactosidase necessary for lactose metabolism is encoded in the lacZ gene. Downstream of lacZ is the regulatory gene lacR.

As a gram positive bacterium L. delbrueckii retains its purple stain under the Gram test. Unique to microbes of this type is a thick cell wall and a cell membrane. The absence of an outer membrane which functions as an additional barrier could be a reason for its sensitivity to bacteriophage attacks (2).
Proteases encoded by the prtB gene are found anchored along the cell wall of L. delbrueckii subsp. bulgaricus and lactis ; and most likely in the subsp. indicus. The ability of the subspecies’ to grow in dairy is owed to the enzymatic activity in casein breakdown to expose essential amino acids, in addition, to constitutive or inducible expression of the lacZ gene. (8,4)

As an inhabitant of fermented dairy products and producers of lactic acid Lactobacillus delbrueckii, with the exception of L. subsp. delbrueckii, is the cause of its low acidic environment. The nutritional requirements are adapted to the bacterium’s environment; as such includes but are not limited to amino acids, vitamins, carbohydrates and unsaturated fatty acids (9). L. delbrueckii has an optimal growth temperature of 40-44 °C under anaerobic conditions(3). Specifically, L. subsp. bulgaricus has a symbiotic relationship with Streptococcus thermophilus as it coexists in starter lactic acid bacteria cultures.

Lactobacillus delbrueckii is non-pathogenic. In fact, it is widely used in the food industry and can be found in yogurts, milks, vegetables, and cheeses.

Specific strains of Lactobacilli has been shown to have mitogenic effects and aid in spleen cell proliferation. Heat treated YS strains of L. delbrueckii subspecies bulgaricus and L. acidophilus directly induced generation of IgM and IgG by murine spenocytes and was dependent on bacterium concentrations in contrast to ATCC strains. The former was most effective at amounts of 5×106 and 2 × 107 Lactobacilli ml–1. Antibody concentrations were determined with ELISA and Fisher’s test. In addition, strains YS and ATCC of both Lactobacilli species induced lymphocyte proliferation. L. delbrueckii subsp. bulgaricus was shown to activate polyclonal B-cells indicated from the maintenance of high antibody levels upon removal of Lactobacilli antibodies. (13)


A study suggested the practical use of multiplex PCR to detect bacteriophages at any stage of manufacture. The method proved to be simple and quick, all the while guaranteed the minimum quality requirements of the products. Although results indicated low amounts of L. delbrueckii phages in the samples used, a relatively higher amount was found of S. thermophilus phages. These results are consequent of the increasing proportion of S. thermophilus used in starter cultures. (2)


Lactobacillus delbrueckii, generally, can not be found outside starter cultures in the dairy industry. The natural environment from which it originated is not known for sure. A recent study reported the isolation and characterization of L. delbrueckii subsp. bulgaricus along with its symbiont Streptococcus thermophilus from plants in Bulgaria on the basis of tradional yogurt preparation. Six hundred sixty five plant samples, with the target plant Cornus mas were collected from four sites away from human habitation. Identification of the L. subsp. bulgaricus was determined via phenotype analysis, Pulse field gel electrophoresis (PFGE) analysis, and PCR methods. The cultures samples that grew at 45°C were rod shaped, produced D-lactate, generated a DNA fragment of 1065 base pairs with the primers LB1/LLB1, and showed proteolytic activity. From the 665 plant samples L. delbrueckii subsp. bulgaricus and or S. thermophilus were isolated, a majority of which came from Blagoevgrad, Bulgaria. (12)