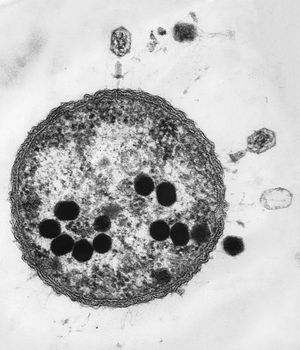 [Phage therapy] is the application of bacteriophages to bacterial infections of humans or animals with the goal of reducing bacterial load (2). Bacteriophages are a bacterial parasite, ubiquitous in environment, and can infect over 140 bacterial species (4). They are host specific and can only infect and replicate within specific bacteria. This allows them to target pathogens commonly found in food without reducing the number of commensal bacteria. Phage mediated [biocontrol] of food borne bacteria is not only an effective means treating pathogenic infections, it is also a solution to the fast-emerging antibiotic resistant bacterial strains (5).

Table indicating the % of surviving cells when a certain concentration of phage is added, over a time interval. (10)

Phages must be applied and retained near the treated surfaces in order to avoid wasteful phage washing and potential inactivation of virulence particles, particularly from wash fluids that clean processing areas (8). Phages need to be immobilized in the right orientation in order to obtain high capture efficacy of bacteria and reduce binding to non-specific bacteria. Through electrostatic interactions, studies have shown that negatively charged phages immobilized to positively charged cellulose membranes resulted in a lowered bacterial count for both Listeria and E. coli O157:H7 studies (8).

Compared to antibiotic treatment, phage mediated biocontrol only infect the targeted subset of bacteria, avoiding the imbalance of commensal flora often caused by broad-spectrum antibiotics. Phages are also self-limiting because they only replicate as long as the targeted bacterium is present (1). Phages are also constantly evolving to circumvent their host’s defenses and resistant bacteria are often less fit than their phage-sensitive counterparts (3).

"In other infected cells, phage development is repressed and phage DNA integrates into the bacterial chromosome. The resulting lysogenic cell can replicate indefinitely, but can be induced to return to the lytic cycle with the excision of phage DNA from the chromosome." Image courtesy of http://www.nature.com/nrg/journal/v4/n6/fig_tab/nrg1089_F1.html

L. monocytogenes is an opportunistic food borne pathogen that affects the young, the old, immunocompromised and the pregnant women population (1). It causes a serious disease called Listeriosis, with ill-effects ranging from gastroenteritis to septicaemia (11). It can tolerate high levels of salt content, can grow at acidic pH values and can still replicate at temperatures below 1 degrees celsius (9). L. monocytogenes is usually killed during pasteurization or other heat treatments (1), however it has been isolated from ready-to-eat foods such as milk, cheese, cold-cut meats, smoked fish, seafood and vegetables (9). No clear reservoir has been identified, but contaminations can occur via ingredients, factory workers and equipment (1).

Salmonella causes diarrhea and is one of the principal causes of food-borne illness on a global scale (1). Birds, particularly chicken remains to be the main reservoir by which this bacteria enters the food production system, however it is not the only reservoir, thus other food products can be contaminated (1)[3]. Phage therapy would not introduce new biological agent into the food chain since the Salmonella phage is readily isolated from poultry (3). Because contamination of livestock is the main cause of Salmonella diseases, phage intervention should occur at the pre-slaughter level and post-slaughter level (1).