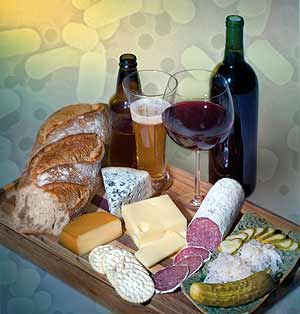 Fermentation of bacterium and yeasts was originally used as a method of preservation but has been more developed and understood since then (Stahl 2008). These processes are now exploited in order to alter the texture and flavor of foods as well as to incorporate substances, which are beneficial to the health of consumers (Stahl 2008). Examples of the use of these microorganisms can be seen in products including cheeses, yogurt, kombucha and bread products.

The production of cheese utilizes starter cultures being added to milk with the aim of producing semi-hard and hard cheeses (Marilley et al. 2004). The starter cultures produce lactic acid, resulting in a pH decrease in the milk and promoting curd synthesis (Stanton et al. 1998). Also, galactose and glucose are formed upon the hydrolysis of lactose by said cultures, and glucose is subsequently oxidized to pyruvate while galactose is converted to glucose-6-P and glyceraldehyde-3-P (Marilley et al. 2004). These molecules can be broken down further to short-chain compounds including diacetyl, acetate, and ethanol, which provide cheeses with their characteristic flavors (Marilley et al. 2004). 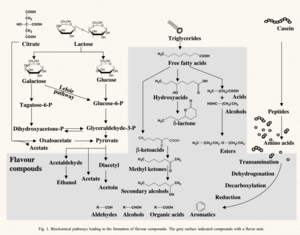 In order for these microbes to flourish and give the desired results, a number of factors must be controlled in this process (Beresford et al. 2001). These factors in include ensuring that moisture levels are not too low (promoting dehydration) or too high (increasing spoilage susceptibility) as these values can vary within different zones of the cheese, as well as salt content, and temperature (Beresford et al. 2001).

Yogurt is also a fermented milk product, which takes advantage of lactic acid generating bacteria cultures Lactobacillus and their use of lactose in milk as a substrate to produce lactic acid (Lourens-Hattingh et al. 2001). The enzymes “rennet” used in cheese production are not used in yogurt and the thickness of yogurt is due to the solubility of casein in the acid produced and added starch, pectin, and gelatin (Drake et al. 2000). Recently, live strains of Lactobacillus acidophilus and Bifidobacterium (AB-cultures) have been added to yogurt alongside S. thermophiles and L. bulgaricus (Lourens-Hattingh et al. 2001). These AB-cultures, referred to as “probiotics”, have been shown to provide benefit to the consumer by displacing toxin-producing bacteria from the gastrointestinal tract (Lourens-Hattingh et al. 2001).

Like probiotics in yogurt, the beverage Kombucha, now consumed worldwide, also provides benefits upon consumption. These benefits are provided by inhibiting growth of undesirable microbes (Sreeramulu et al. 2000). The drink, which originated in China, includes acetic acid producing bacteria (Acetobacter xylinum, Acetobacter xylinoides, or Bacterium gluconicum) and yeasts along with sucrose, which liberates the glucose and fructose (Battikh et al. 2013). The fructose is metabolized to ethanol and carbon dioxide by yeasts, and the Acetobacter strains in Kombucha oxidize ethanol to produce acetic acid (Sreeramulu et al. 2000). 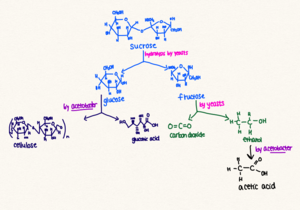 Figure 3. Symbiotic mechanism between yeasts and Acetobacter in kombucha , resulting in the production of acetic acid

Investigations have shown that acetic acid and Kombucha show the same inhibition towards harmful bacteria including Escherichia coli, Salmonella enteritidis, Salmonella typhimurium, Heliobacter pylori, and Listeria monocytogenes Listeria moocytogenes in addition to other pathogenic microorganisms (Sreeramulu et al. 2000). Acetic acid inhibits growth by the mechanism of uncoupling; the uncharged acid molecules can permeate the cell membrane before dissociating in the interior and reducing the proton motive force, which organisms use to produce energy for their metabolic needs (Russell et al. 1998).

Yeasts Saccharomyces_cerevisiae have also been used to make bread, first occurring 12 000 years ago, by the Egyptians (Mondal et al. 2008). Now understood, it is established that yeast metabolize sugar in order to produce the fermentation products carbon dioxide and alcohol, which expand with temperature resulting in a risen bread dough. The alcohol is no longer present in the bread after baking is complete (Golden 1890). In addition to the yeast, sugar is added to initiate the fermentation and salt is incorporated to strengthen the gluten (Mondal et al. 2008). A good baking yeast should be able to tolerate diverse temperatures, acidity levels, presence of sugars and fats, as well as have the ability to utilize a variety of substrates (Linko et al. 1997).

The examples described above are only a few of the many uses of microorganisms in foods, which are now exploited to produce desired food products. Other uses include microbes to produce beers, wines, raisins, sauerkraut, pickles, and additional cheeses that weren’t previously discussed. In addition, more discoveries are continuously made and technology improvements are constantly designed, suggesting that the use of microbes in food production, and the benefits that come alongside their use, are not limited to what has been revealed to date.