Xenorhabdus nematophilus is a gram-negative bacterium in the family Enterobacteriaceae. This microbe can be described as entomopathogenic (i.e. an organism which can kill arthropods by poisoning with its own toxins or those it harbors).

X. nematophilus is not found free living in the soil environment. It exists in a symbiotic relationship with insect-parasitizing nematodes of Steinernema carpocapsae . The interaction is specific to each species, and both are found ubiquitously in soil environments. Their ecological significance is particularly apparent in agriculture, as a form of biological control of pest insect species. The biological processes of the bacterium are matched by the needs of the nematode and vice versa. Together this mutualistic relationship results in the predation of insect species, such as those in the order Lepidoptera.

Gram-negative bacteria produce two-layer outer membrane blebs. A bleb is an irregular bulge in the plasma membrane of a cell that forms by localized separation of the plasma membrane and cytoskeleton. As outer membrane vesicles, these spherical structures encapsulate toxic proteins to protect them from the degradation by host enzymes. X. nematophilus excrete blebs into its growth medium. Through Gram staining it was found that the vesicles have electron-dense contents and also contain proteins. The contents have properties of insecticides, antimicrobial agents, and degradative enzymes (Khandelwal et al. 2003). The specific composition, the function, and the practical uses of these contents are being studied under a variety of contexts.

This microbe has been described as having two phases of cell types. The phase variation is found in all five species in the genus Xenorhabdus, and the phases are characterized by the differences in metabolites excreted. Variability of the metabolites is likely due to the bacteria adapting to its environment. For X. nematophilus the excretions differ in their virulent properties. The cell type associated with the nematode is phase I. While this bacterium is not free-living, a variant cell type of the species is found to occur spontaneously in non-growing conditions, called phase II. Non-growing conditions may include sub-par larval hosts or even a soil environment. The cell types for each phase have varying motility characteristics, in which motile X. nematophilus have peritrichous flagella. Xenorhabdus nematophilus is considered stationary once it has been regurgitated by the nematode into the hemocoel of the larval host. During the stationary phase, the cells produce proteases, phospholipases, antibiotics, and inclusions composed of crystal proteins. These all function to facilitate an optimal growing environment for both the itself and the nematode. The study conducted by Volgyi et al. found that certain phenotypic traits are common to all X. nematophilus cell types, while virulence and motility are variable and can be influenced by environmental conditions (Volgyi et al. 1998). 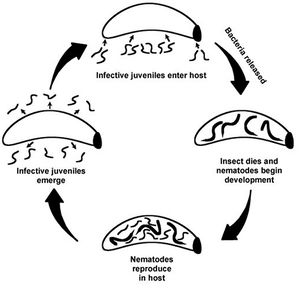 The life cycle of the nematode is completed in a few days, and it results in thousands of new infective juveniles looking for hosts. Source: http://www.biocontrol.entomology.cornell.edu/pathogens/nematodes.html

The interaction between Xenorhabdus nematophilus and Steinernema carpocapsae is a specific mutualism. The bacterium is contained in a vesicle of the foregut of an infective juvenile stage soil nematode. Once the nematode finds and enters an insect host, the bacterium in released into the hemocoel of the insect.

The nematode is not a free living organism and requires a host for its life cycle to be completed. Only the infective juvenile stage of S. carpocapsae is able to move through the environment in order to find a host. S. carpocapsae infective juveniles are 0.4 to 1.5 mm in length and are characterized as sedentary ambusher species. They will wait in the surface layer of the soil and commonly enters the host through the spiracles. Low temperature or oxygen levels will inhibit the movement of the nematode (Shapiro-IIan et al. 2012).

In order to create an optimal growing environment in which to reproduce, the nematode needs the entomopathogenic bacterial symbiont. X. nematophilus will secrete compounds that kill the insect host (found to be toxic proteins). Additional compounds include enzymes that bioconvert the insect host. Antimicrobial agents are also secreted that protect the insect carcass from putrification from other microbes. In the initial stages of infection of the insect host, X. nematophilus inhibits the growth of various fungal and bacterial competitors (Ansari et al. 2005). The metabolites exuded by the bacterium are known to have antifungal, nematicidal, or insecticidal effects. X. nematophilus limits competition so that the nematode and itself can use the insect larvae carcass nutrients (Floyd et al 2012, Khandelwal et al 2003).

The bacterium X. nematophilus is not found in the soil environment. It cannot survive in water or soil for long by itself, as it is an endosymbiont of nematodes (Photorhabdus luminescens has the same characteristic) (Morgan et al. 2003).

S. carpocapsae facilitates the death of the larval host. The nematode is only free living during its infective juvenile stage, and it is at this time it can disperse through the soil environment to locate a larval host. This function has allowed both organisms to become ubiquitous in nearly all soil environments (Shapiro-IIan et al. 2012).

When a host is found, S. carpocapsae enters the body cavity of the larvae. Once it is in the hemocoel of the insect, the X. nematophila are released from the gut of the nematode.The hemocoel is a series of interconnected tissue spaces through which blood circulates in arthropods, thus it is an ideal structure to start an infection (Khandelwal et al 2003, Yang et al. 2001).

Populations of S. carpocapsae and X. nematophilus influence the populations of their insect hosts. This symbiotic relationship causes mortality of the host in it’s larval stage. Most commonly Lepidopteran species are the target host, and their larvae function most importantly as consumers of plants. In the case of agriculture, there are many lepidopteran species that are pests to the crop. For example, the Helicoverpa armigera (corn ear worm). In a study of the toxicity of X. nematophilus on H. armigera larvae, it was found that LD50= 4x104 cells/gram of diet is the dosage that will cause the death of 50% of the test population. Non-fatal levels of infection resulted in symptoms such as small size and moribund (i.e. near death). These results are true for when the bacterium invades the hemocoel of the larva or is ingested orally (Khandelwal et al. 2003).

Xenorhabdus nematophilus is ubiquitous across all habitat types. Entomopathogenic nematodes exist in a diverse range of soil habitats including farmland, forests, beaches, and deserts. A survey of entomopathogenic nematodes had confirmation of the nematodes in 2-25% of the sites sampled. Steinernematid (and Heterorhabditid) nematodes are exclusive to soil environments.An economically important habitat for the symbionts are cultivated fields (Shapiro-IIan et al. 2012)

The outer membrane of gram-negative bacteria performs many functions. The membrane may be specialized to increase survival in adverse conditions. The outer membrane has a mechanism for protein secretion, that in the case of bacterial pathogens will kill the host. The bacteria can then utilized the the nutrient rich source of the host cadaver. Virulence factors are contained in outer membrane vesicles and secreted to the environment. Pseudomonas aeruginosa, Proteus mirabilis, and Serratia marcescens are other examples of bacteria that package enzymes such as proelastases, hemolysins, and protease in vesicles (Khandelwal et al. 2003). Bacteroides gingivalis has similar vesicle properties to X. nematophilus where it releases toxins from its outer membrane (Khandelwal et al. 2003).

Photorhabdus luminescens is related to X. nematophilus. They were found to have homology of genes that code for the insecticidal proteins associated with nematodes. P. luminescens also has oral insecticidal activity (Khandelwal et al. 2003, Morgan et al. 2003).

The most common hosts for the symbiotic pair are species in the order Lepidoptera. Lepidoptera have numerous roles in an ecosystem. Examples of species mentioned in the sources include: Helicoverpa armigera (corn earworm) is a moth whose larvae feed on a wide range of crops; Pieris brassicae (cabbage white butterfly) larvae are also crop pests; Manduca sexta (greater wax moth); and Galleria mellonella is a moth that is a pest of honey bees combs and fruit (Shapiro-IIan et al. 2012).

There is a DNA region of Xenorhabdus nematophilus found to encode for insecticidal protein, chitinase, and other pathogenic attributes. This suggests that the toxins of X. nematophilus are made up of multiple components (e.g. polypeptides).

When the secretions of X. nematophilus are centrifuged, the particulate fraction of the insecticidal proteins are more active than the soluble fraction. This has implication in use of this microbe in biocontrol as it will dictate the conditions needed for it to be most effective. X. nematophilus secretions are also sensitive to heat. Heating of the outer membrane vesicles to 80 C for 15 min resulted in the inactivation of insecticidal activity (Khandelwal et al. 2003).

The bacteria produce antibiosis compounds in vivo (in an organism) and in vitro (in artificial). X. nematophilus will inhibit the growth of Phtytophthora infestants, a Oomycota that causes potato blight (Yang et al. 2001).

Nematodes are classified as part of the microfauna in a soil environment, and are a component of the microbial loop. Food web studies show that fauna contribute up to 30% of the total net nitrogen mineralization, mainly from microbial-feeding nematodes and protozoa. At this level of the soil ecosystem, nitrogen and other nutrients that would otherwise be locked up in organic form, are released through the decomposition activities of the microfauna. The possible Net Primary Productivity of the system is increased. Specific to the interaction between X. nematophilus and S. carpocapsae, the insect carcass is consumed by the nematode and the bacterium, efficiently using all available nutrients. The symbiotic relationship between the two organisms allows for maximum uptake or release of nutrients. Termites have microbial symbionts in the termite gut, and together the two organisms decompose ligno-cellulose (Shapiro-IIan et al. 2012).

In agriculture, the most successful insecticide based on a microbe is that from the bacterium Bacillus thuringiensis . The problem that arises from this is insect resistance to the developed insecticide. In the study Morgan et al. 2003, it is suggested that new genes need to be found. The genes must be orally active protein toxins because the gene can be genetically engineered to be expressed in the plant tissue eaten by the pests. This is important because then only the insect species that are damaging the crops will be killed. This allows for safer pesticide use in cultivated fields, and it allows for greater biodiversity.

In Agricultural systems the use of X. nematophilus as a bio-pesticide is limited. It cannot be stored indefinitely on a shelf under any conditions. For the bacterium to be effective, it needs to be transported and used within a time frame. And as shown the research done in Floyd et al 2012 on outer membrane vesicles, it cannot be exposed to excessive heat. The complications of using bacteria as a bio-control are discussed in Federici 2001. Economics, engineering, and environmental safety are all components that will need to be developed for bacterial bio-control agents to become successful. For example, Federici stresses the importance of human health and highlights a study done in New Zealand on the human health effects of spraying Bt on suburban populations. In this case, the spraying was done to control for an invasive lepidopteran species that was damaging the trees. Overall, the need for more sustainable solutions increases, microbes will likely become more widely researched and used as biocontrol agents.

What factors allow for the bacteria to recognize environment?

The bacteria must have some mechanism by which to recognize whether it is in it’s host environment and regulate gene expression accordingly.

What are the specific functions of the proteins in the outer membrane vesicles?

The specific individual proteins present in outer membrane vesicles have yet to be measured for their toxicity. Chitinase is likely to be one of the outer membrane proteins, but its effectiveness is not known. The presence of chitinase increases the pathogenic possibilities of compounds derived from X. nematophilus.

Edited by Chloe M. Mattia, a student of Angela Kent at the University of Illinois at Urbana-Champaign.